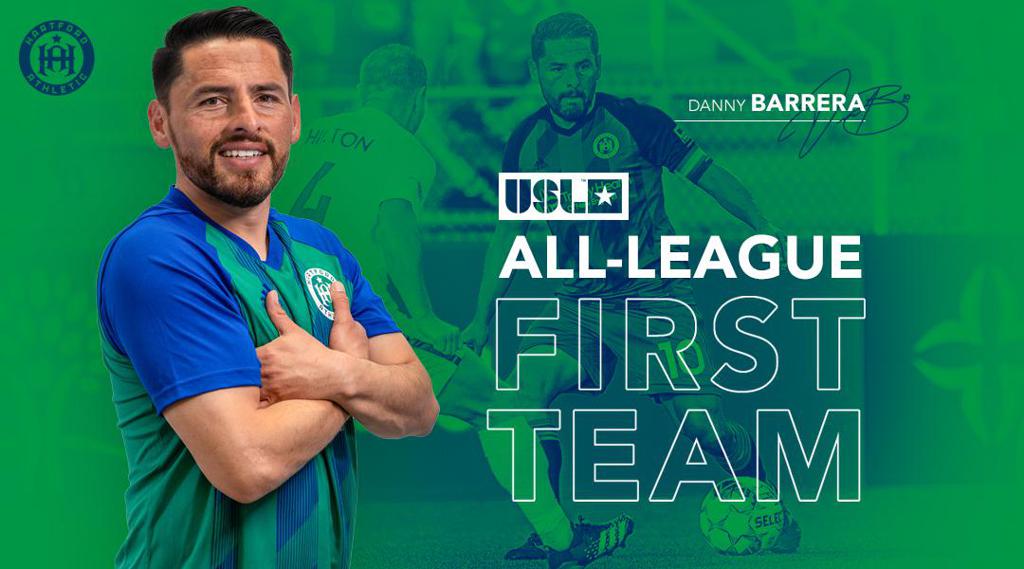 Danny Barrera was named to the USL Championship's All-League First Team today. He is the first Hartford Athletic player ever to be named to an All-League Team.

Barrera had a stellar season for Hartford, scoring eight goals and tallying twelve assists. The twelve assists were the most in a single season in Hartford history, most in a season in Danny's career, and the most in the league in 2021. His eight goals are the second highest total in a season for the club and catapulted him to first all-time in Hartford history with thirteen.

Fans interested in learning soccer skills from our first ever All-League player can sign up for the Danny Barrera Skills Clinic on December 3rd and 4th. Boys and Girls ages 6-14 can sign up at hartfordathletic.com/clinics.

GK – Evan Louro, Tampa Bay Rowdies: In his second season in Tampa Bay, Evan Louro led the Championship with 14 shutouts – good for second-most in a regular season in league history – and posted a 0.74 goals-against average while playing 31 of 32 regular season games for the Atlantic Division winner.

D – Paco Craig, Miami FC: Making his return to the Championship in Miami, Paco Craig earned a third All-League First Team selection as he starred in the center of his new club’s back line. The English center back finished tied for the league-lead among defenders with 198 recoveries and fourth overall with 134 clearances, while also posting a 63.9 percent duel success rate and 62.6 aerial duel success rate, earning a +7.50 Goals Added mark to lead all center backs in the Championship.

D – Jonathan Gomez, Louisville City FC: The 18-year-old standout had a remarkable year that saw him named in the preliminary roster for the United States to the 2021 Concacaf Gold Cup, and individually Jonathan Gomez proved a standout two-way player for LouCity as he recorded two goals, eight assists and 44 key passes offensively while recording 43 interceptions and a 75 percent tackle success rate defensively.

D – Forrest Lasso, Tampa Bay Rowdies: Voted to the All-League First Team for a fifth consecutive season, Forrest Lasso was the centerpiece of a three-man back line that was the best defense in the league for Tampa Bay. Lasso led the league with 153 clearances and 132 aerial duels won, the latter coming at a 73.3 percent success rate, while also winning 67.7 percent of duels and blocking 26 shots.

D – Sean Totsch, Louisville City FC: LouCity stalwart Sean Totsch was one of only three players to play every minute of the regular season as he earned his second consecutive All-League First Team selection. Totsch completed a league-high 1,765 of 2,079 passes in the regular season while also recording 195 recoveries and winning 114 aerial duels – second among defenders – at a 69.5 percent success rate as LouCity faced a league-fewest 263 shots.

M – Jorge Hernandez, LA Galaxy II: The 20-year-old playmaker had a breakthrough season for Los Dos as he recorded 12 goals and six assists while leading the league with 91 chances created in the regular season. Hernandez’s play helped propel the Galaxy II attack as he finished with the highest Expected Assists mark in the league at 8.52xA while tying for the league lead with three goals directly from free kicks and a league-high five goals from outside the penalty area.

M – Aodhan Quinn, Phoenix Rising FC: One of the league’s major offseason moves as he joined Phoenix, Aodhan Quinn earned the second All-League First Team selection of his career with a standout season for the Pacific Division winners. Quinn finished tied for second in the league with 11 assists and notched six goals for Rising FC while ranking second in the Championship with 84 key passes and second on Rising FC with a +7.89 Goals Added mark.

F – Sebastian Guenzatti, Tampa Bay Rowdies: The Rowdies’ captain earned his first All-League First Team selection as he scored a career-best 21 goals in the regular season while also recording six assists to lead the club in both categories. Sebastian Guenzatti’s work-rate as the first line of defense also drew plaudits throughout the season as he recorded 24 interceptions and notched a Goals Added mark of +10.86 to lead all players in the Championship.

F – Santi Moar, Phoenix Rising FC: The Spaniard had a career-high 16 goals in his second season with Rising FC, leading the team, while also recording four assists and 63 key passes to sit tied for fourth in the league. Santi Moar’s decision-making in the final third also played a major role in Rising FC’s success as he completed 49 dribbles and recorded four goals from beyond the penalty area, tied for second in the league.

GK – Matt VanOekel, Birmingham Legion FC: The veteran had an outstanding individual campaign in basic numbers, finishing tied for third in the league with nine shutouts and recording 80 saves, but the impressiveness of Matt VanOekel’s 2021 season was made clear with his league-best -8.36 differential in Goals Conceded over Expected Goals as he led the second-best defense in the regular season.

D – Aaron Guillen, Tampa Bay Rowdies: Aaron Guillen continued to provide an ideal complement to Forrest Lasso in the Rowdies’ three-man back line as he led the side with 59 interceptions while winning duels at a 69.3 percent success rate and aerial duels at a 78 percent success rate. The 28-year-old led Tampa Bay with 1,392 passes completed – fifth-most in the league – at an 83.5 percent accuracy rate.

D – James Musa, Phoenix Rising FC: The New Zealand international seamlessly moved back into the Rising FC lineup after a season away to play a key role in the center of defense for Phoenix. James Musa won 148 duels at a success rate of 68.8 percent while also notching 56 interceptions defensively and completed 1,294 passes at an 83.7 percent accuracy rate, earning a +5.80 Goals Added mark.

D – Mark Segbers, Memphis 901 FC: One of a handful of holdovers at 901 FC, Mark Segbers was a central figure in the club’s first postseason berth. The right back recorded 62 interceptions – good for eighth in the league – and made 185 recoveries, eighth-most among defenders, while recording two goals, three assists and 30 chances created in the attacking end of the field.

D – Josh Yaro, San Diego Loyal SC: Joining San Diego over the offseason, Josh Yaro had a standout season on both sides of the ball, recording 27 tackles at a 77.1 percent success rate – tied for second-highest percentage in the league among players with at least 25 tackles – while also notching 53 interceptions and a duel success rate of 66.3 percent. Yaro also completed 1,461 passes – fourth-most in the league – at an accuracy rate of 89.7 percent.

M – Jose Gallegos, San Antonio FC: Nominated for the Championship’s Young Player of the Year award a season ago, the San Antonio FC Academy product earned his first All-League selection this campaign after taking the next step toward what appears a bright future. Jose Gallegos led the league with 99 completed dribbles, had seven goals, three assists and 38 chances created, and also tied for third in the league with 233 duels won.

M – Kenardo Forbes, Pittsburgh Riverhounds SC: The Championship’s all-time leader in regular season assists earned his fifth All-League selection after a season in which he continued to be a catalyst for the Hounds, recording five goals and six assists while sitting tied for fourth in the Championship with 63 chances created. Kenardo Forbes also ranked third in the league with a 7.56 Expected Assists mark.

M – Diego Luna, El Paso Locomotive FC: Recently selected to the United States U-20 National Team, Diego Luna made an impressive debut in the professional ranks with Locomotive FC as he recorded nine goals and five assists for the Mountain Division winner at the age of 18 years old. Luna recorded 37 chances created overall and had a shot conversion rate of 21.7 percent.

F – Neco Brett, Birmingham Legion FC: The Jamaican forward earned his second All-League Second Team selection after a career-best 18 goals in the regular season for Legion FC that accounted for more than one-third of the side’s overall attacking output in the regular season. Neco Brett also added three assists and 32 key passes and had a shot conversion rate of 29.5 percent.

F – Cameron Lancaster, Louisville City FC: Earning his third All-League selection in the past four seasons, Cameron Lancaster became only the second player in league history to record multiple 20-goal regular season campaigns with 20 tallies for LouCity’s high-flying attack. The English forward averaged a goal every 92.6 minutes, the best scoring rate in the league among players with at least 10 goals in the regular season campaign.

F – Kyle Murphy, Memphis 901 FC: One of numerous offseason arrivals in Memphis, Kyle Murphy had a career season as he became the 10th player in league history to record 20 goals in a regular season. Murphy averaged a goal every 106 minutes on a shot conversion rate of 28.6 percent, and accounted for 41.6 percent of 901 FC’s goals as the side reached the postseason for the first time.