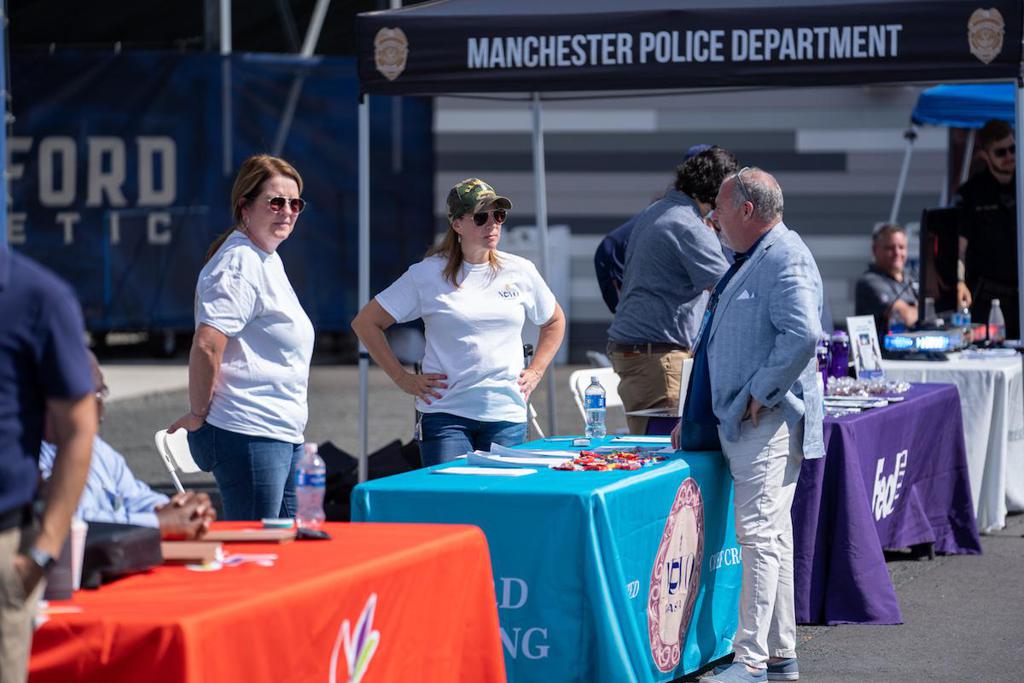 Thanks to the support of the City, State, fans, and our partners, Hartford Athletic continued to deliver on its mission to make our community the best place to live, work, and play in 2021. The Club continues to expand on an already robust lineup of impactful community programming with a number of exciting new activations. Here are some highlights:

Hartford Athletic launched the Green & Blue Foundation 501c3 which strives to enhance the quality of life for youth and disadvantaged people in Connecticut. The Foundation focuses on making a difference for communities in need in support of five key Community Pillars: Health and Wellness, Diversity and Inclusion, Youth and Family Education, Economic Development, and Veterans and First Responder support.

The Green & Blue Foundation also hosted the first ever Veterans and Diversity Hiring Expo on September 7th. In partnership with the Connecticut Department of Labor, over 300 job seekers came out to meet with over 60 potential employers to apply for jobs. In addition to providing job opportunities, our partners were able to provide educational opportunities for those seeking resume assistance, interview strategies and dress for success advice to assist in the process. As a result of the Veterans and Diversity Hiring Expo, 42% of companies who attended had job seekers complete applications for vacant positions.

The Foundation will continue to host these programs and more in 2022, including a STEM Education match.

The Club continued to expand on its strong corporate support with 55 corporate partners including Founding Partners Trinity Health of New England, Stanley Black & Decker, Cigna, The Hartford, and Travelers. Key community elements are part of all corporate partnerships with a few highlights below:

In the third annual Match for a Cause, Hartford Athletic and Stanley Black & Decker raised over $19,000 for The Legacy Foundation of Hartford. Hartford Athletic players wore special all-black kits which were auctioned off to fans as well as other HA items and experiences. The total was matched by Stanley Black & Decker and all proceeds were donated to The Legacy Foundation.

Hartford Athletic and Cigna teamed up with the Hartford Public Library to create The StoryWalk, an interactive children’s book display coming to Colt Park in 2022. A series of 20 podiums will each display two pages of a book in English and Spanish and challenge kids to complete a physical activity while walking to the next page.

Hartford Athletic and Travelers were thrilled to bring back the Community Champion Program which had been cancelled in 2020 due to COVID-19. This year Travelers provided tickets to 100 refugee children and their families from the CT Institute for Refugees and Immigrants to attend a Hartford Athletic home match. The Travelers Mini Pitch continued to be the most popular fan zone for kids in the stadium on matchday.

Nuovo Pasta, Stop & Shop, ConnectiCare, and Citizens Bank all combined to participate in the Goals for Meals program. For each goal Hartford Athletic scored in 2021, 300 meals and 24 boxes of pasta were donated to Connecticut Foodshare.

Hartford Athletic and Gengras Motor Cars combined to run Youth Skills Clinics at Dillon Stadium throughout the summer. Participants were given the opportunity to train in a professional environment and learn from Hartford Athletic’s First Team coaching staff and participants received a free registration by contacting a Gengras dealership allowing for all to participate.

For the fifth annual AARP Community Challenge, AARP received more than 3,500 applications from nonprofits and government entities, resulting in a highly competitive selection process to fund 244 quick-action projects across the country, helping urban, rural and suburban communities make immediate improvements and jumpstart long-term progress to support residents of all ages. AARP teamed up to grant Hartford Athletic's Green & Blue Foundation funds to enhance pedestrian safety, comfort and enjoyment with traffic calming features, accessible benches and a community garden in Colt Park. Earlier this year, Hartford Athletic staff worked with Trinity College Men’s Basketball to clean up trash in the streets surrounding the stadium and paint parking barriers in the Dillon Stadium parking lot with completion of additional projects planned for 2022.

The Community Ticket Program returned in 2021 welcoming those that may otherwise not have a chance to attend a match and celebrating our community heroes. Through donations from the Green & Blue Foundation, the Gitlin Family and Business Alliance partners, over 8,000 fans were welcomed to Hartford Athletic matches throughout the season through the Community Ticket Program.

Hartford Athletic also continued to expand to hosting additional major community events at Dillon Stadium this fall. On October 30th, the Small State Great Beer Festival presented by Powerstation Events made its Dillon Stadium debut. Thousands of people flocked to Dillon for a festival celebrating all things Connecticut. Over 40 Connecticut breweries, cideries, distilleries, and vineyards brought samples of their beverages. Local restaurants and food trucks were also on hand to showcase their food while some of the state’s best bands combined to put on an all-day concert.

The CIAC, governing body for Connecticut High School sports, once again chose Dillon Stadium as the site for its Soccer State Championships. All eight Boys and Girls State Championship matchups will be played on the weekend of November 20 and 21.