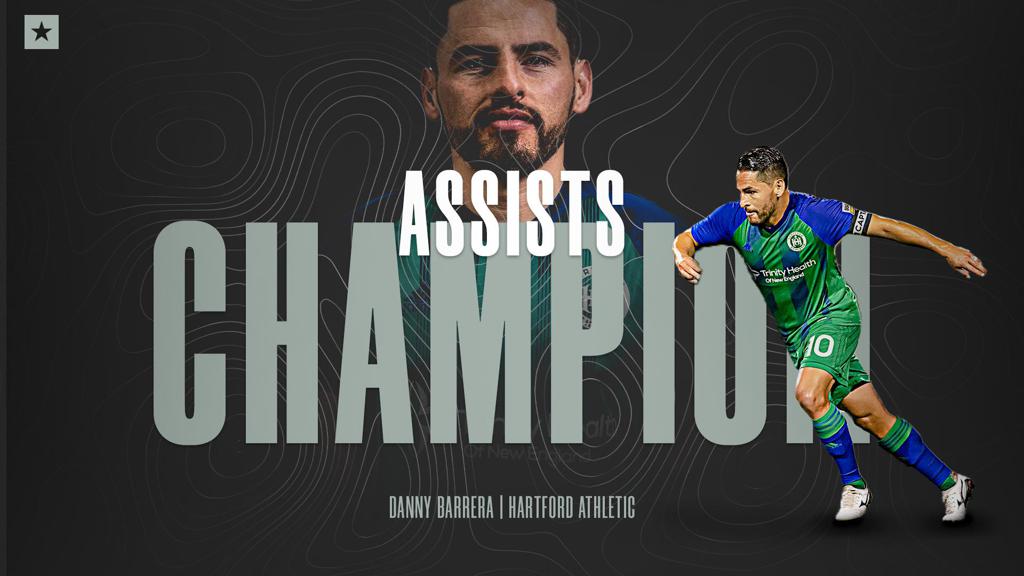 Danny Barrera has won the 2021 Assists Champion Award for the USL Championship. Barrera's 12 assists this season were most in the league and the most he has ever recorded in a single-season. Barrera,  who also added 8 goals in an outstanding 2021 campaign, is now one assist behind Kenardo Forbes for the all-time lead in assists in USL regular season history. This is the first time Barrera has won the Assists Champion Award.

A new arrival in Colorado Springs this offseason, Barry had a career season with 25 goals that saw him equal the Championship’s single-season scoring record set by Louisville City FC’s Cameron Lancaster in 2018. The 28-year-old native of Guinea broke through the 50-goal mark for his career in the process and tied for the longest scoring streak in the Championship this season with goals in seven consecutive games between May 14 and June 25. Barry now sits in sixth place all-time in league history with 63 regular season goals.

Louro claimed the first Golden Glove award of his career as the anchor to a standout Tampa Bay Rowdies defense that conceded the fewest goals of any side in the league this season. Louro recorded a goals-against average of 0.74 as he appeared in all-but-one of the Rowdies’ games this season. He also completed the campaign with a league-leading 14 shutouts, one fewer than the single-season record of 15 held by current Canada Men’s National Team goalkeeper Maxime Crepeau. Louro’s performance alongside his teammates saw the Rowdies finish the season with the best record in the Championship entering the 2021 USL Championship Playoffs, presented by TwinSpires.

One of the league’s top playmakers for a number of seasons, Barrera earned his first Assists Champion award this campaign after leading the league with 12 assists. Both a standout dead ball specialist and passer in open play, the 31-year-old native of Bogota, Colombia had a second consecutive standout season for the Athletic while ranking third in the league in Chances Created. Barrera is now only one behind first-placed Kenardo Forbes in the Championship’s all-time regular season assists leaders with 44 regular-season assists to his name in the league.