The Protector of the Fortress 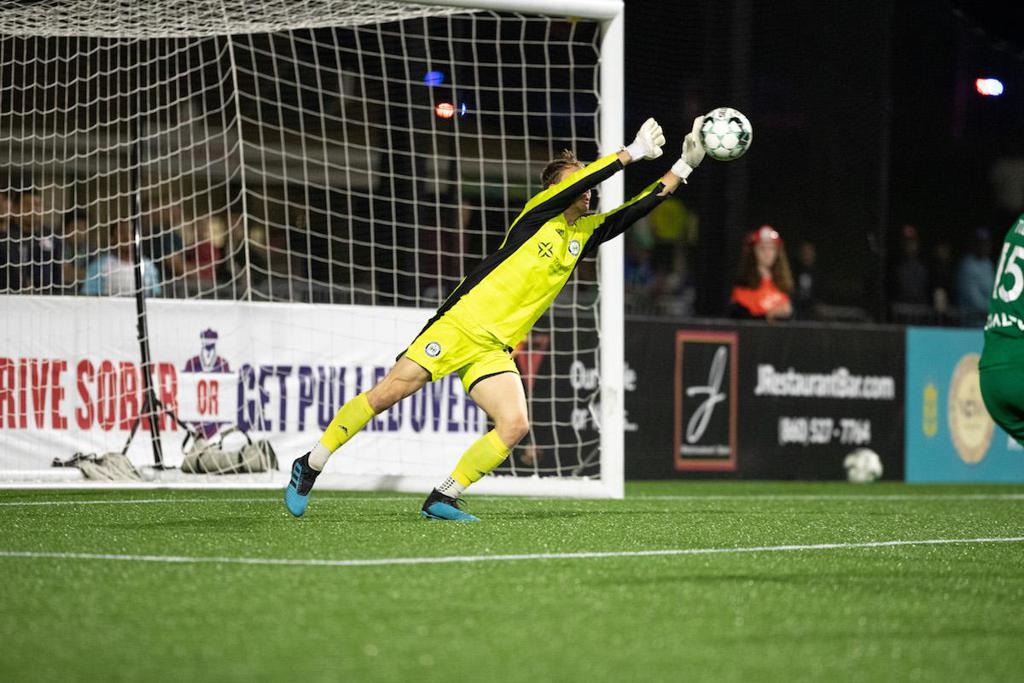 It’s the waning stages of the 2021 USL Championship season and Hartford Athletic is making a final push to vault themselves back into the playoff discussion.  Goalkeeper Jeff Caldwell has been an integral part of the dynamic for the Boys in Green and is the x-factor for a team looking to string wins together down the stretch.  His swift reflexes and acrobatic saves are a thing of beauty, sacrificing his body at all times to keep the opposition off the scoresheet.  He’s had a long journey to reach this form, but he’s only scaled the tip of the iceberg in a career destined for longevity and success.

“I started playing [in] goal at the age of four and that’s [the position] I’ve always been”, Caldwell, 25, said.  “I took after my older sister who was a great goalie and super aggressive.  She would always throw herself at people’s feet so I did the same, and I’ve loved it ever since.”

Born in Todd, North Carolina, Caldwell’s life from a young age revolved around soccer.  He was invited to many Olympic Development Program (ODP) camps at the state, regional and national levels, which served as a path to play for the U.S Youth National Team.  While playing with North Carolina Fusion, Caldwell shined and got the call to attend his first U17 National Team camp in Los Angeles, California on trial.  He left a good enough impression to stay with the program for a year, racking up nearly 20 caps to his credit and playing in the qualifiers for the U-17 World Cup.

Following multiple trials in the U.S and Europe, Caldwell ultimately decided to attend the University of Virginia.  He served as the backup his freshman year on a Cavaliers squad that won the national championship in 2014 and later became the first UVA goalkeeper to earn All ACC Honors three times.

“I loved every bit of my time at UVA”, Caldwell said.  “I still go back to Charlottesville to spend my offseasons and train.  I wouldn’t trade the relationships and experiences I had as a student and athlete at the university for anything.”

Upon graduating, the North Carolina native was selected by NYCFC with the 19th overall pick in the 2018 MLS SuperDraft.  He spent two years behind goalkeeper Sean Johnson and current Austin FC goalkeeper Brad Stuver.  Caldwell learned the ins and outs of what it takes to be an elite professional and became very close on a personal level with them off the pitch as well.

“Those guys set the standard so high all the time”, Caldwell said.  “Brad’s finally gotten his opportunity to be an MLS [starting goalie] with Austin [FC] and has absolutely smashed it.  Sean’s been a mainstay as one of the best keepers in the [MLS] for a number of years and was very generous in terms of sharing his knowledge of the game with me.”

In March of 2019, Caldwell was loaned to USL Championship side Memphis 901 to be their starting goalkeeper for the season.  It would be the first time in his professional career that he was getting in-game reps, and he maintained the #1 position throughout.  In 28 games for the brand new expansion team, Caldwell had 80 saves and six clean sheets, flashing potential that the UVA alum was more than capable of handling starting duties.  It wasn’t always smooth sailing, but his craft improved exponentially and he came away learning a lot more than when he first arrived in that locker room.

“I had some early success and then hit some lumps where I actually went back to NYCFC for a month in the middle of the season”, Caldwell said.  “It slowed the momentum down a little bit from a game front but I came away with a lot of valuable lessons, especially how to manage a 30 plus game campaign.  It was a phenomenal experience overall.”

Caldwell packed his bags and returned back to the MLS when the New England Revolution selected him in the MLS Waiver Draft.  He would be the third-choice keeper for a team that includes U.S. National Team goalkeeper Matt Turner.  Unfortunately, COVID-19 struck not long after the start of the 2020 season, but in his short time there, Caldwell had an incredible mentor that gave him a blueprint of how to be great in one of the world’s top leagues.

“I was really fortunate to work with another unbelievable goalkeeper, [Matt Turner]”, Caldwell said.  “He’s a great technician in terms of his craft and makes plays consistently that guys would normally make a few times in their career.”

Weighing his options in the 2021 offseason,  Caldwell was intrigued by the young, hungry, and driven culture Hartford was building.  He signed with the club in January as the expected workhorse in net for Athletic and hasn’t relinquished his spot since.  Caldwell’s play has been nothing short of spectacular, making jaw-dropping saves daily that attract eyeballs from across the American soccer universe.  Whether it’s his sprawling saves on point-blank opportunities, tipping on screamers outside the box, or cat-like reflexes on penalties, Caldwell is a massive fan favorite to the green and blue faithful and has been a poised, respected leader in the locker room with his teammates.

“My goals coming here were to never concede, which obviously can’t always happen but it’s something I shoot for every game, and to be consistent”, Caldwell said.  “After a year of not playing, I’ve worked extremely hard to get my game back on track so I can put the team in a position to win games every time we step onto the field.”

Caldwell has the second-most saves in the USL Championship with 92 and tied for the fourth-most clean sheets with six.  At just 25 years old, he has no plans of slowing down and hopes to continue his ascent up the ranks in the future.

“Like any good professional, I just want to get better at my craft”, Caldwell said. “I hope to apply my skills at the highest levels possible and just take each game and season one at a time.”