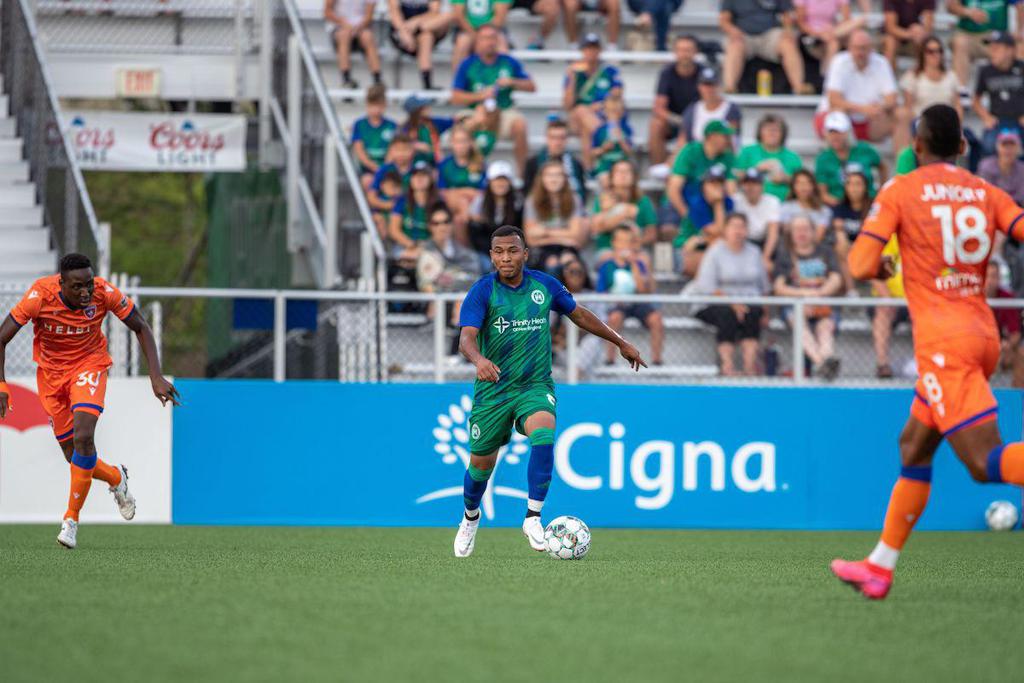 Thanks for checking out the latest 20 Questions with midfielder Christian Gómez! For the most recent 20 Questions interview with Defender Younes Boudadi, click here! This interview was translated from Spanish.

1) Let’s start at the beginning. Puetro Ordaz, Venezuela. What does this place mean to you in your life?

CG: It means a lot of different things; I was both raised there and that’s where I first played soccer. It means everything to me.

2) How does your Venezuelan background influence your way of playing soccer?

CG: For me, the technical aspect. We are good on the ball and we constantly are with the ball at our feet.

3) Who was your childhood soccer hero?

CG: Being from Venezuela, there was a Venezuelan player named Edgar Jimenez. I always said I wanted to be like him and to play like him. From Europe I’ve always liked Iniesta.

4) You make your professional debut at 18 years old; how did you feel in that first game?

CG: On that day I was a little nervous, but once I got on the field to warm up my nerves went away.

5) Did you feel part of the team since you were so young, or did it bring a lot of pressure being so young?

CG: No, no I didn’t feel that much pressure on me. I had had time training with the team, and almost all of us were friends and knew each other very well.

6) When you won the Venezuelan Cup in your first season, you must’ve been really proud. How did it feel to win a trophy in your home country?

CG: That was the best for me. My first cup in Venezuela was something inexplicable. It has been the best thing that has happened to me until now.

CG: Messi, because I just like how he plays more

8) In 2018, you were loaned to Atletico San Francisco in the DR. What were, if any, the biggest differences between Venezuela and DR soccer wise?

CG: In Venezuela the soccer is better. It’s more technical, more physical, more playing. In the Dominican Republic it’s less quality, because of the league. So, I went to the DR, I was motivated to go for personal reasons, just because I wanted to play, and at that time in 2018 I wasn’t playing. So I went, we got to the final, we lost, but in the end I returned to Venezuela.

9) What did you learn with your time in the DR?

CG: Maturity. When I went to the DR I learned a lot, and I think that it was a good experience too because it was the first time abroad and it was a good learning experience.

10) What is your favorite Venezuelan dish?

CG: My favorite food has to be fried chicken or fried potato, but Venezuelan it has to be the Venezuelan arepa, it’s the best of the best around.

11) How did you feel about the opportunity to play for Hartford Athletic?

CG: Well, immediately I said I’m going. My representative came to me and said “this team in the US wants you” and I didn’t even think twice about it. I wanted to come, I was anxious to play, to get to know this country.

CG: I think that Ronaldinho is the best.

13) How did your parents react when you decided to come here to play?

14) How has your family played a role in your passion for soccer?

CG: My mom said that my dad played but I’ve never seen him play. My dad says he was super good. Once I got older, I’d tell him “Hey come out and play!” but he wouldn’t. I learned to play in the streets by myself. When I was 4 would play in front of my house, and from there I kept going, and when I was 5 I signed up for a school with a team where the team I debuted for was from. At 16 I played in the second division, and then a pro at 18.

15) What are your goals as a professional player for the future?

16) What is your favorite movie?

CG: I’m not one to watch a lot of TV, but I liked Tom and Jerry and Spongebob.

17) How does it feel to play at home in front of the fans at Dillon Stadium?

CG: It feels great, it’s a great place to play.

18) Describe to me how it has felt to grow as a player in 3 different countries at such a young age. Have you enjoyed the journey so far?

CG: Well, I continuously adapt to the country. It has been complicated learning the language. On the field for example I now understand a lot of what I hear on the field from the coach and the players.

19) What is the biggest difference between Venezuela and the United States of America?

CG: The people here are very structured, everything is very set in its way. In Venezuela it is just a different way of life. Here, everything is to how they say it has to be, and that’s that

20) If you could play with any player ever, who would it be and why?

CG: I would have to play with Messi, it would be so easy.