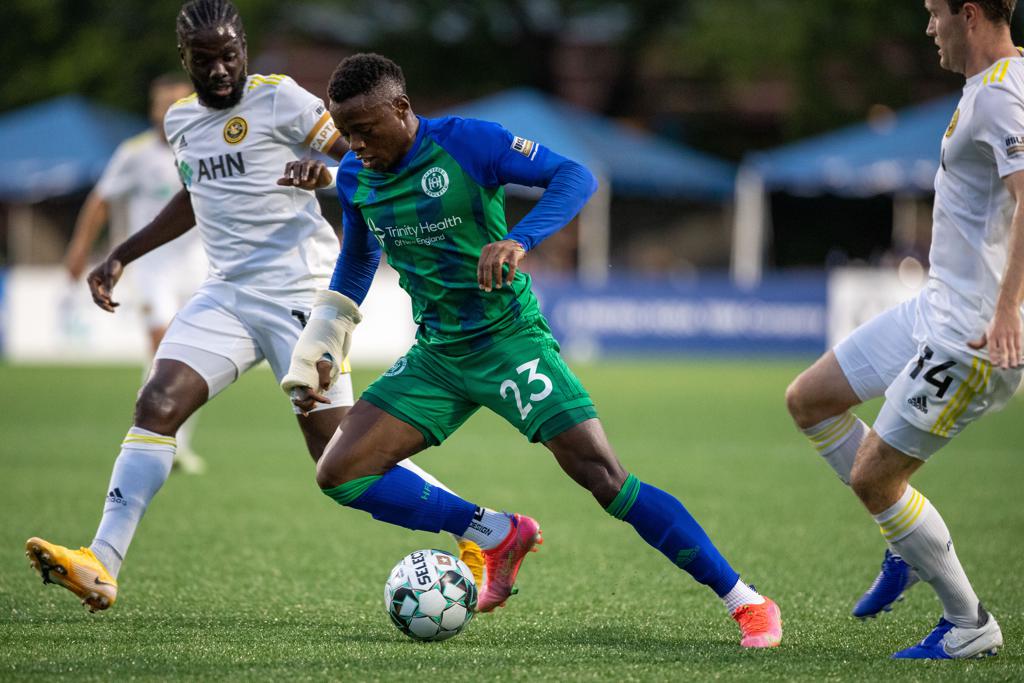 The fireworks in this started just 15 seconds into the match. Cicerone played a beautiful ball through to Alex Dixon in the box. Goalkeeper Jeff Caldwell made a sliding attempt to come up and get the ball and collided with Dixon in the process, leading to a Yellow Card and a Pittsburgh penalty. Cicerone calmly slotted the PK home and gave Pittsburgh an early 1-0 lead.

16 minutes later, Hartford answered. Walmer Martinez played a beautiful left footed cross into the box, Preston Tabort Etaka soared through the air to head the ball back towards net and Juan Carlos Obregón Jr. smashed the ball into the back of the net to level the score. It was Obregón's fifth goal of the season.

In the 35th minute, more fireworks flew. Former Hartford Athletic forward Alex Dixon made his way in towards net and was taken down in the box by Tulu. Tulu, the last man in defense, was given a Red Card and Hartford would be force to play the final 55 minutes down a man.  Jeff Caldwell once again came up big, making an incredible save with his feet on Dixon's PK to keep the game tied at 1. Caldwell made 5 saves on the evening, moving him into sole possession of first place for saves made in Hartford Athletic history. Hartford clamped down for the final 10 minutes of the half and went into the break tied at 1.

Despite the one man deficit, Hartford came out of the second half with energy. Captain and Midfielder Danny Barrera was fouled in the box and was given a PK for the home side. Barrera completed the penalty, his team-leading sixth goal of the season which tied him with Dixon for most goals in Hartford Athletic history (11). Seven minutes later, Dixon would answer, finding space inside the box and finishing into the top left corner to level the score at 2.

Back and forth the teams went for the next 33 minutes with plenty of good opportunities for both teams to take the lead. Just after the announcement of five minutes of stoppage time, Pittsburgh crushed the hearts of every Hartford Athletic fan. Caldwell punched away a Riverhounds corner, Cicerone collected it in the box, created space and slotted it past Caldwell to give the Hounds a lead they would not relinquish.

No rest for the weary as Hartford Athletic is back at home on Wednesday, September 1st at 7 PM against Charleston Battery. Tickets are on sale at hartfordathletic.com/single.