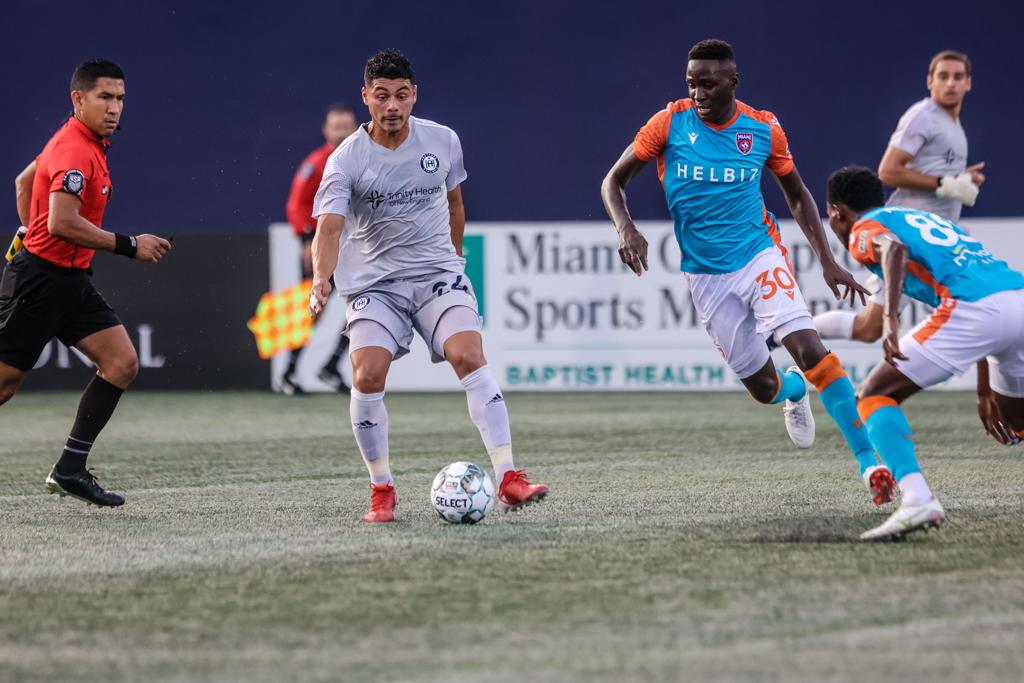 Hartford Athletic came up just short, taking on a red hot Miami FC squad, falling 2-0 on a swelteringly hot and humid evening at Riccardo Silva Stadium.  Harry Watling and company find themselves in a three-way tie for fourth place in the USL Championship’s Eastern Conference, Atlantic Division alongside the Charleston Battery and Charlotte Independence.

Minimal action occurred from both sides up until the 29th minute when Miami forward Lamar Walker weaved through multiple Hartford defenders, freezing Darwin Lom in his tracks, but sailing his point-blank try over the bar.  The home side controlled possession for the rest of the first half, creating multiple scoring opportunities to break open the score before halftime.

After a great diving save from Athletic goalkeeper Jeff Caldwell on Miami’s “Speedy” Williams right-footed strike in the 45th minute, the ball came to FC’s Othello Bah, who was taken down by Hartford midfielder Justin Haak in the box, resulting in a penalty.

Williams, who recently had a two-goal outing in a win over Pittsburgh Riverhounds SC, was called to take the try in the 45+1 minute.  His shot to the bottom left corner was denied by a leaping Caldwell and eventually cleared away by Athletic defender Tulu to keep the score level right before halftime.

There was a new look to Hartford’s lineup following the fifteen-minute break with three substitutions entering the game in what was a lackluster first half.  The team generated only one shot total, which failed to reach on target.

Miami FC made one change to their lineup and the decision paid off almost immediately.  Substitute Billy Forbes in his first touch rocketed a shot from a tough angle past Caldwell to give his team a crucial 1-0 advantage.  It would be the only lead change of the game.

Athletic were better offensively in the second half but never dictated the pace of play or strung a number of passes together setting up a threatening chance.

Caldwell, however, was once again spectacular in goal, with his night highlighted by a sprawling save when Miami appeared to have an open net in the 62nd minute.

Miami tacked on another goal in the 90th minute from Billy Forbes to put the home side up for good 2-0.

Hartford returns home and will face Pittsburgh Riverhounds FC in a critical division clash at 7 PM on August 28th, hoping to keep themselves in the playoff picture. Tickets can be purchased at hartfordathletic.com/single.