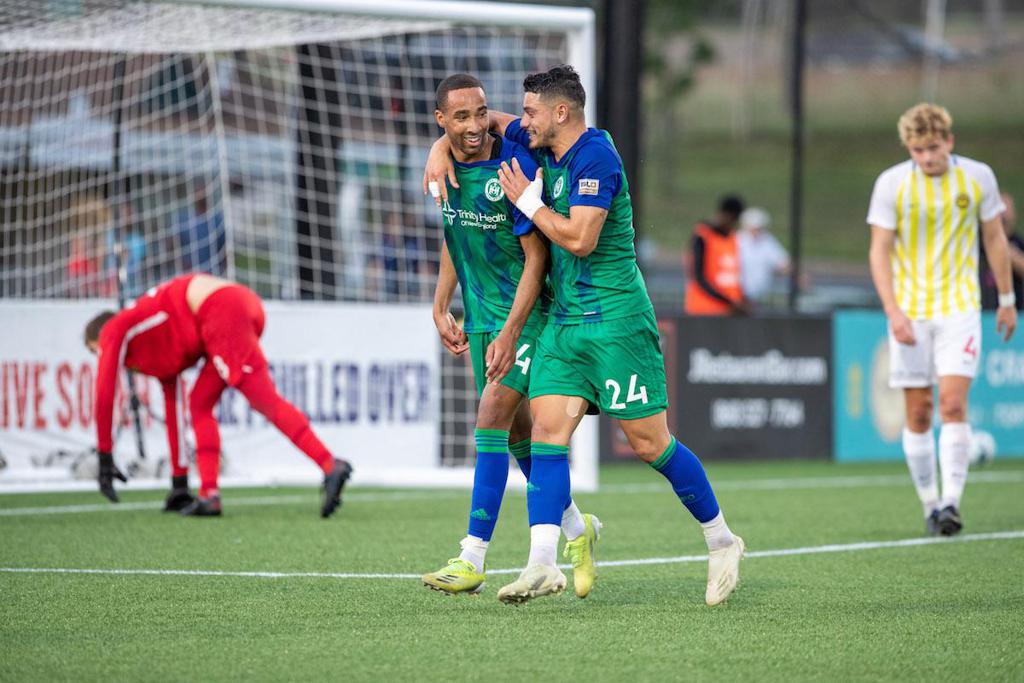 Hartford Athletic dominated the possession from start to finish in a thrilling 2-1 victory over Charleston Battery at Dillon Stadium.  The Boys in Green snapped a four-game winless streak and put themselves firmly back in the USL Championship’s Atlantic Division playoff picture.

The Battery had some dangerous opportunities early but was never able to get into a rhythm and control the pace of play.  Hartford goalkeeper Jeff Caldwell salvaged the most threatening chance in the 7th minute with a brilliant glove save.  The University of Virginia alum was stellar as always, turning in another excellent performance.

The debut of forward Darwin Lom was a major success for Athletic, providing an extra boost of energy to the attack.  His surging chance in the 28th minute went past Battery goalkeeper Paul Lewis but was called back for offside.  Nonetheless, his contributions gained momentum for Hartford, knocking on the door of breaking open the score.

Glory struck for the Athletic in the 32nd minute on a beautiful cross from forward Danny Barrera to the head of forward Derek Dodson, putting his try past Lewis to give Hartford a 1-0 lead. This made Danny the third player in USL history to record 40 regular season assists.

Despite the advantage, the Athletic refused to take the foot off of the gas.  Another scoring opportunity was derailed as Dodson was taken down inside the box resulting in a Hartford penalty.

The captain Barrera stoically stepped up to the spot, striping his try past the diving Lewis into the bottom left corner, giving Hartford a comfortable 2-0 cushion. It was Barrera's fifth goal on the season which leads all players on the club.

The Battery were deflated after a poor 45 minutes but found new life after a Zeiko Lewis cross was flicked on by Claudio Repetto, narrowly skidding past Caldwell and cutting the lead to 2-1 in extra time.

The second half was more of the same from both sides as Athletic controlled the pace with ease and limited Charleston’s opportunities to maintain the lead.  Hartford triumphed to a 2-1 win in a fantastic all-around performance from the boys in green.

Hartford Athletic are back in action on Sunday, August 22 against Miami FC in a division clash at Riccardo Silva Stadium, hoping to keep the momentum rolling and return back home with another three points. The match can be seen on WCTX MyTV9 or streaming on ESPN+ or at hartfordathletic.com/watch.