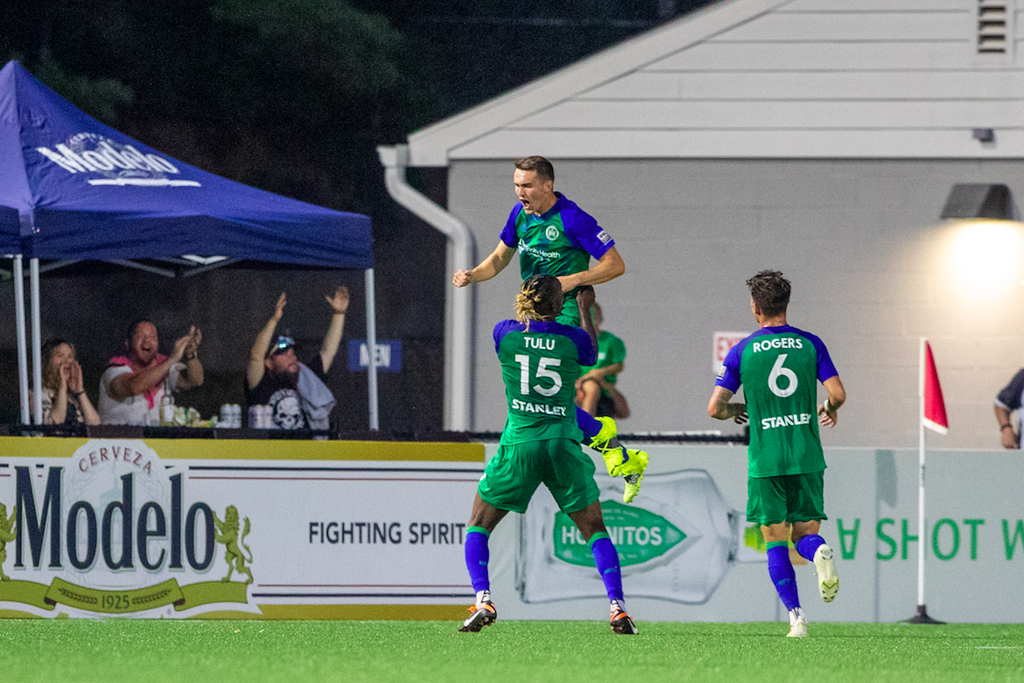 Hartford Athletic took an early lead in the first half but fell short to Pittsburgh Riverhounds SC 3-1 at Highmark Stadium in Pittsburgh on Saturday night.  Two second-half goals by former Athletic forward Alex Dixon and a late tally by substitute Louis Perez propelled the Riverhounds to sole possession of first place in the USL Championship’s Eastern Atlantic Division.

Miami traveled to Dillon on July 24th, and lost 2-0, with both Hartford goals coming on Barrera assists. Danny’s pressing, leadership, and quality on the ball in the decisive moments are what put Miami on the back foot for large portions of the match. With the rematch brewing, Barrera is sure to have a say in this match. 11 goal contributions in 13 matches, and Barrera has Miami’s number, with 2 assists in the last match against them. Athletic will be looking to their captain to garner another positive result at home.

In the 9 games where Hartford have scored first, 7 of them have ended in a win. For Miami, they have scored first in 6 games, and have won 5 of them. Both teams are well coached and are set in their game plan, especially when scoring first, however, Miami in their last match against Charleston went down 2-0, only to come back in the second half to win 3-2. Hartford are yet to win a game when they have conceded first, something that Miami seems to not have as much of a struggle with. Miami come to Dillon off the back of that dramatic comeback and will fancy their chances of getting at the Athletic early, but if Hartford can get their goal first, the stats are there to show that they have the bottle to see it through.

Barrera is having the season of his career, registering 11 goal contributions in 13 matches. Last time out against Miami, Danny assisted twice, leading Hartford to a huge 2-0 victory, earning himself a spot in the USL Championship’s Team of the Week for his performance. Barrera’s pressing and energy in the midfield against Miami was crucial, and if the Athletic want to repeat their success at home again against the in-form Miami, Barrera will need to have himself another stellar game.

With 7 goal contributions in 16 matches, Ariel Martinez is having himself a season. He has won Player of the Match for Miami in 2 of their last 3 matches. Martinez plays mainly as Miami’s central forward; however, he has also found himself playing on the left. Last time out against Hartford, Martinez was Miami’s biggest threat with 3 shots, 2 being on target. Miami will be looking to Ariel to build on his last performance against Athletic, hoping this time he will find the back of the net.

Miami travel to Dillon Stadium to inflict revenge on Hartford, who handed them their only loss in their last 7 matches. In 7 matches, Miami has won 5, drawn 1, and lost 1, scoring 14 and conceding 7. Their loss to Hartford on July 24th was the only game in this 7-match stretch in which they did not score. Miami went into their last game against Hartford as the favorite in the match, yet came away with nothing. They say revenge is best served cold, but Miami come into this one red hot and eager to win at Dillon.

Thanks to Founding Partner The Hartford, it's Jr. Fire Marshal Night with a limited edition co-branded fire helmet giveaway for the first 500 fans! Learn more about the program here.