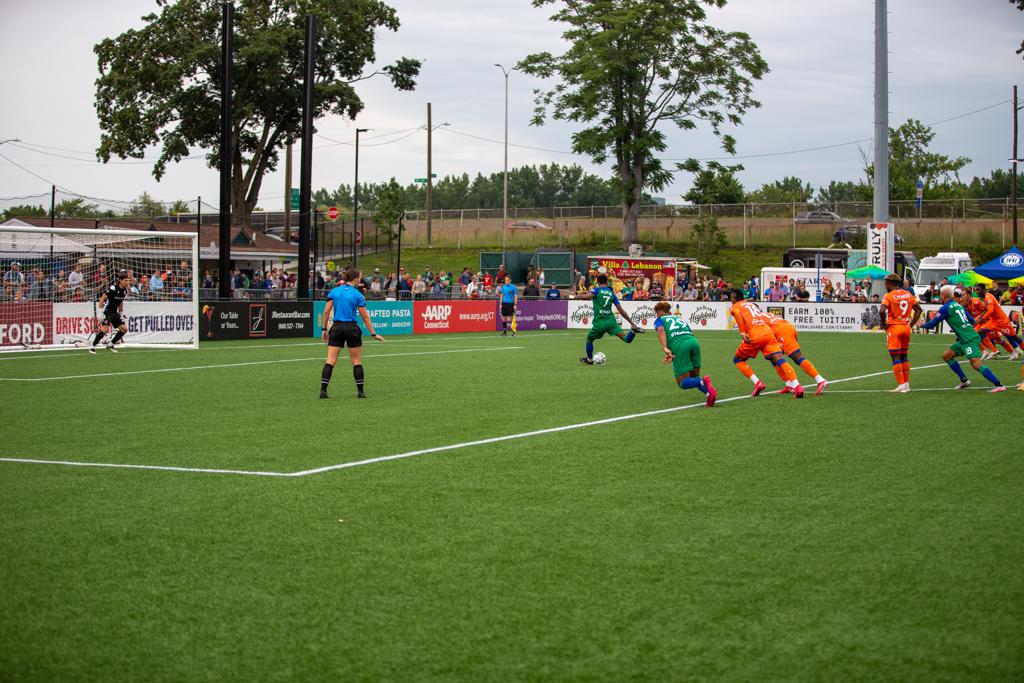 In an action-packed, back and forth Atlantic Division battle, Hartford Athletic and Miami FC played to a 1-1 draw at Dillon Stadium.  Goals by both sides came in the first half.

The Athletic were on the attack early and created a multitude of chances to open the game.  A breakthrough finally came in the 12th minute, when forward Juan Carlos Obregon Jr. was taken down inside the box by Miami FC’s Paco Craig resulting in a penalty opportunity.  Bradford Jamieson IV was given the nod to take the kick and delivered with a beautiful strike to the upper left corner past Miami FC goalkeeper Connor Sparrow in the 14th minute.

Led by strong veteran presence in their front half, Miami showed life after conceding a goal and were finally rewarded on a left-footed strike from Othello Bah past diving Athletic goalkeeper Jeff Caldwell in the 25th minute.  The orange and blue had gotten their equalizer, scoring their first goal against Hartford this season after being held scoreless in their first two appearances against them.

A halftime substitution for the Athletic saw new Academy signing Kenny Hot enter the game in his first appearance with the club.  The 17-year-old from Lincroft, New Jersey showed great chemistry with his new teammates and created an abundance of chances for Hartford to regain the lead.  He will attract a lot of eyeballs as the season rolls on and will undoubtedly become a fan favorite for the green and blue faithful.

Hartford is known for their late-game heroics and desperately tried to put one in the net in the final minutes of the game but without any luck in the end.  Jeciel Cedeño entered as a substitute and was fantastic on the ball creating his own chances as well as others for his teammates.  Both teams leave with a point and will meet again in Miami on Sunday, August 22 in what should be another entertaining clash.

Caldwell was very busy throughout the contest and had some spectacular saves to keep the score level.  He has been the x-factor for the Athletic all season long and has attributed greatly to the team’s success in 2021.

The Green and Blue are back at it this Saturday against Colorado Springs Switchbacks FC on Saturday, August 7th, and hope to start a two-game road trip with three points.  Hartford is back at Dillon Stadium on Tuesday, August 17th against the Charleston Battery.