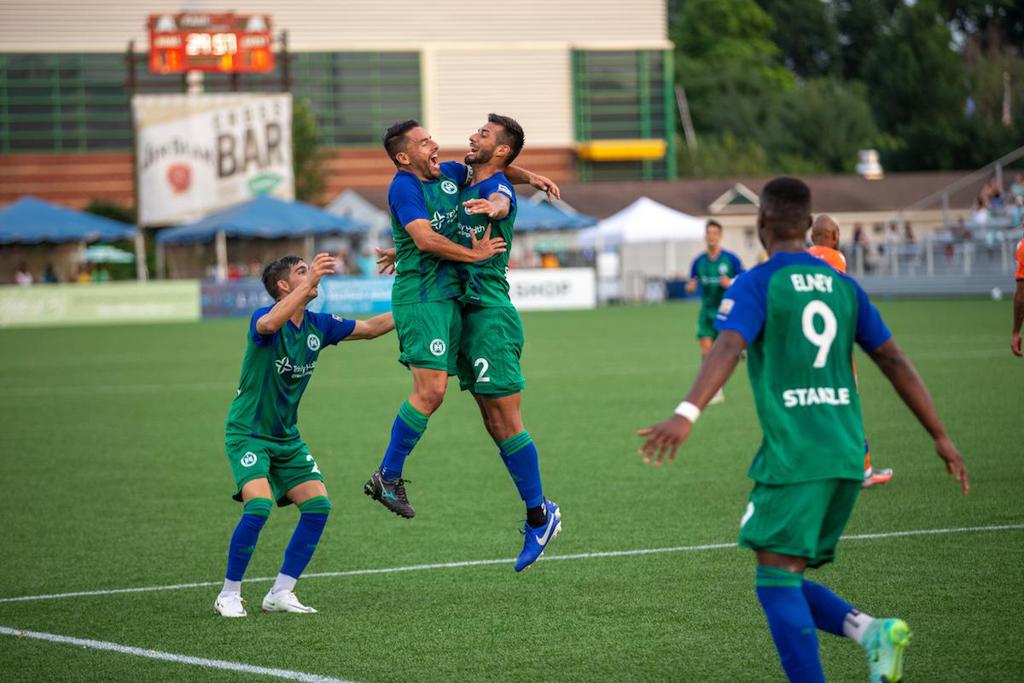 For the third time this season, Hartford Athletic has landed multiple players on the USL Championship's Team of the Week! Midfielder Danny Barrera and Defender Alex Lara both earned the honor while Goalkeeper Jeff Caldwell was named honorable mention.

Barrera assisted on Lara's goal as well as Conor McGlynn's incredible strike which secured a number of landmarks for the skipper. Barrera now leads the USL Championship in assists in 2021 (7), ties the Hartford Athletic single-season record for assists which he set in 2020, and moves him into third place all-time in the USL Championship in career assists. Danny padded his already significant lead in all-time assists for Hartford, he holds 18 career assists for the club while Gabi Torres sits in second place with 5. This is Barrera's second Team of the Week selection this season.

Lara scored his second career goal for Hartford Athletic in the 30th minute to give Hartford the lead. He also had 6 interceptions in the match which vaulted him into the team lead with 20 on the season. Lara is also second on the club in shots blocked (12) and Aerial Duels won (20).

GK – Joe Kuzminsky, Charleston Battery: Joe Kuzminsky achieved a Championship first in recording both a penalty-kick save and an assist in a shutout for his side as the Battery took a 2-0 victory against the Charlotte Independence on Friday night.

D – Jonathan Dean, Birmingham Legion FC: Jonathan Dean scored a stoppage-time winner to lift Birmingham to a 2-1 victory on the road against Indy Eleven on Saturday night, capping a performance that also saw him record one assist, six key passes and complete 43 of 51 passes.

M – Danny Barrera, Hartford Athletic*: Danny Barrera recorded both assists in Hartford’s 2-0 victory against Miami FC – moving into third place in the Championship all-time – and completed 43 of 53 passes and six key passes overall in helping his side to victory.

M – Josh Drack, LA Galaxy II: Josh Drack notched a goal and an assist to help lead Los Dos to a 3-0 win against Oakland Roots SC on Sunday afternoon and was sharp on the ball throughout, completing 27 of 29 passes and winning 9 of 12 duels defensively.

F – Alex Dixon, Pittsburgh Riverhounds SC: Alex Dixon had a goal and assist in the Hounds’ 3-1 victory on the road against the New York Red Bulls II, and also won 7 of 11 duels and made 13 recoveries defensively in a fine two-way performance.