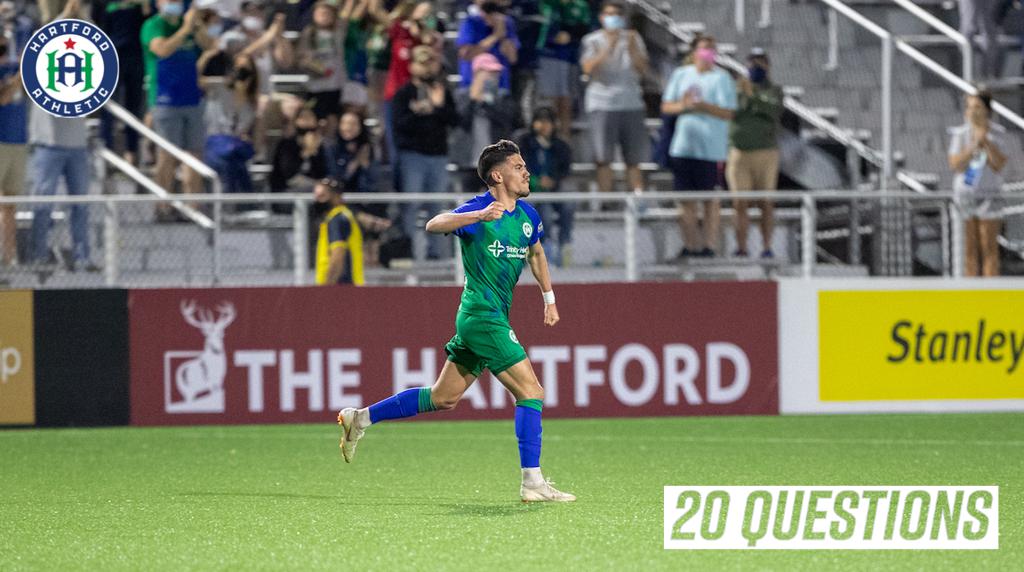 Welcome back to 20 Questions with Defender Younes Boudadi. Younes tells us who he'd support in a match between his two home countries - Belgium and Morocco, what ruling he would change in soccer, and his take on Tik Tok!

1) You started your footballing journey with Club Brugge when you were 7. What was it like being in such a famous club at such a young age and how was your experience during your time there?

YB: It was an amazing experience. That’s really where I became a footballer – they taught me so much technically and tactically. I was playing all over the park there, and learned so much for my thirteen years at Club Brugge.

2) What is your favorite memory of growing up in Belgium?

YB: I think getting to know Brugge was amazing. I lived an hour away from the academy so I went from commuting to the academy, to living with a host family and then living on my own once I got older. I think that experience of exploring Brugge on my own was so pivotal in my growth, and Brugge itself is so beautiful.

3) Do you still support Club Brugge or do you have another team who you support?

YB: Oh, of course – it’s always been the club that is closest to my heart. They shaped me into the player I am today, and wherever I go, I know that they’ll be the club that I always support. I do also support Arsenal though!

4) You played for two different Division 1 schools in college soccer. What were the differences between playing youth football in Europe and playing in college?

YB: The first thing I noticed is that it is way more physical. Growing up, I had the privilege to train technically and tactically; however, I kind of neglected the physical part of the game for much of my youth career. Once I arrived in the United States, I started lifting more and did more work on my body, and that’s helped me to develop another part of the game

5) You have represented Morocco at youth level, including participating in the 2013 U-17 World Cup. What was that experience like?

YB: It was great because, while I grew up in Belgium, my dad is Moroccan. I got to discover my roots doing what I loved. That opportunity actually came around when the head of the Moroccan national team was in town to scout a Dutch talent at a tournament that I was playing in. I ended up having such a good tournament that he contacted me and, within one year, I was playing for Morocco in a World Cup.

6) Who is the best player in the current Morocco national team in your opinion?

YB: I think it would be Hakim Ziyech or Achraf Hakimi, but I would choose Hakim because he plays in the same position as me. He was actually at one of those camps that I was at, only he was 2 years younger than me, and playing as a winger. Of course, he then shifted to right back once he was at Real’s academy, but you could tell there was something special about him as a player.

7) Which do you prefer: club football or international football?

YB: Club football. I’ve been in love with Arsenal since I was little when I went to a match at the Emirates. Other than Arsenal, I love the style of Liverpool and City – even though they’ve been beating up on my team lately! Those two teams are so great to watch, especially when you see the game as a student, as well as a fan.

8) What would you say is the key to the USMNT winning a World Cup?

YB: In the long run, first and foremost they [USSF] should change the system with how the leagues are set up. I think by having teams fight out for promotion and relegation, there is a greater sense of competition and would certainly draw better players to come and compete in American leagues. I also think investing more in youth academies instead of pay-to-play systems. If parents can’t afford to pay for their child to play football, they should still be able to send their kids to academies, because there are talented players who slip through the cracks because they cannot afford to play. I also think that the MLS should remove the salary cap, and their restrictions on transfers.

9) Who is the best manager of all time?

YB: I think it’s Pep Guardiola – I think Mourinho has to be up there as well. I’m not a fan of Mourinho’s style personally, but he’s won everywhere he has gone, whether it’s with Porto, Chelsea, or Inter. They’ve both changed the game in different ways and will leave behind huge legacies.

10) What is one rule that you would add to the game worldwide if you were a FIFA executive?

YB: Ah this is such a tough question – I would add an assist when you draw a penalty. Imagine that you were on a crazy run and you get into the box. You’re about to score, then you’re fouled and someone else takes the penalty – shouldn’t you get some credit for that? That would be my rule.

11) You’ve had an excellent start to the season in that right back/right-wing back position. What do you think has been the key to that success?

YB: When the coaching staff came in they quickly found the strengths of our squad. That was so crucial because now we have multiple systems we can play – we can play a four at the back or three at the back, but our setup is specifically tweaked for our roster. I think what’s more important is that we never switch our style of play, but those little tweaks have helped both myself and the whole squad to be successful.

12) Have you always played at fullback?

YB: I think, like everyone, when I was little I started as a striker. Once I got to Brugge, I was played as a winger before we started to play with eleven-a-side. Once that happened, my coach saw qualities in me that would help the team if I were at the back. During my time at Brugge, however, I was played as a number 6 (holding midfielder), a winger, and a right back because, the more you play different positions on the pitch the better player you become.

13) What is the best vacation spot you have ever been to?

YB: Probably Morocco! When I was a kid, we went there to see family for a couple of weeks and it was always just the best. For cities in Morocco, I really like Marakesh, but we’d also go to Agadir, which is a city at the beach.

14) You’re attending a game at Dillon. What is one food and one drink that you would like to see on the menus?

YB: I would love to see some Belgian waffles on the menu! For an alcoholic drink, I would say a tequila pineapple cocktail would be a great addition, and for a non-alcoholic drink, I’d stick to water.

15) Who is the one person in the squad who is always late?

YB: If this was when I was at Reno FC, I would have said Jiggy [Thomas Janjigian]! He was always late at Reno, but he hasn’t been late for this team. Everyone has been on time this year, and a lot of guys carpool as well so that’s helped. When Jiggy and I were at Reno FC, he was the one who guided me through my rookie season when I wasn’t getting the opportunities I wanted. He’s definitely one of the best center-backs I’ve ever played alongside.

16) What is your favorite thing about being in Hartford?

YB: I haven’t been to a baseball game yet but I’d like to get there and experience the atmosphere! There is also this wonderful Mediterranean place in Hartford I enjoy going to, and Parkville Market is another wonderful area that the entire squad enjoys going to.

17) Belgium and Morocco are playing each other in the World Cup final: who are you rooting for?

YB: That’s a difficult one - if I’m being honest, (and I know I’ll get a lot of texts from my Moroccan friends about this one) I’d be rooting for Belgium. When I was young, that was the country my friends and I were supporting, but Morocco has really come on in the last few years. I missed being in Belgium in the World Cup semi-final

18) Who has the best style in the dressing room?

YB: Oh, I definitely have some of the best style! Bradford has good style for sure, Jeff has a different style than me but it’s good style. Nico is also up there with the best dressed, but put Conor in there for the worst for his small Dwight from The Office t-shirt! (Laughs)

19) You get a recovery day from Coach Watling: how are you choosing to spend it?

YB: Sleeping in for sure! I like to try different restaurants on off days. Usually, a couple of the guys in the squad set up new places for us to try and we’re all new to the town so it’s a good way for our team to continue bonding.

YB: I never really liked it and I refuse to download it as well! It makes me feel a little old that I don’t have it though because I’ll say “ look at this new generation with their new apps!”

For our last interview with Nico Cardona click here.