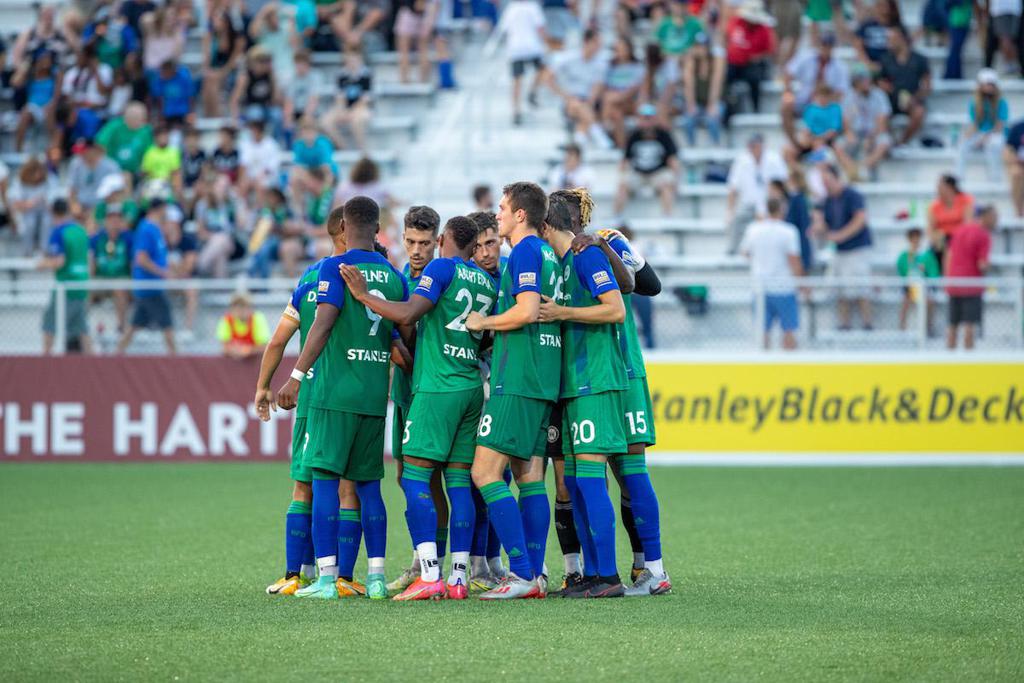 Hartford Athletic used two late goals to salvage a point at home against New York Red Bulls II on Saturday night. RBII put it on Hartford early, scoring twice in the first 25 minutes of the match. Hartford struggled to find any consistent attacking threat until the final 10 minutes of the match. Loanee Derek Dodson scored in the 86th minute, finishing a cross from Preston Tabort Etaka and in the 92nd minute, Thomas Janjigian dialed one up from 25 yards out for his second career goal to level the match at 2-2.

NO REST FOR THE WEARY:

To this point in the season, Hartford has played just nine matches - second fewest of all teams in the USL Championship. But that is about to change over the next few weeks. Between July 10 and July 31, Hartford Athletic will play 5 USL Championship matches and a friendly against the Western Mass Pioneers. “The sport scientists are really gonna earn their money now,” said Head Coach Harry Watling when asked how he plans to manage so many games in such a short period of time. “(For the players) it’s about doing the right things and being a proper professional and we have to get those things spot on.”

His performance on Saturday night after just one day of training with the squad showed that Derek Dodson may be the next successful loanee for Hartford. In 2020, Justin Haak was loaned to the Boys in Green from NYCFC and made an instant impact in the middle of the pitch. In 2019, another NYCFC midfielder, Danny Bedoya and former New England Revolution Goalkeeper Cody Cropper were loaned to the club and made big contributions to a stretch that saw Hartford win each of last two matches.

An absolute screamer to grab a point against Red Bulls II highlighted a stellar Saturday night performance from Janjigian. Including that crucial strike, Thomas had 4 total shots, won 5 duels, made 2 interceptions and 9 recoveries. The 26-year-old has been a commanding and calming presence for Harry Watling this season, boasting an 80 percent pass success rate, and a 70 percent tackle success rate. Janjigian will be a crucial figure in the tough fixtures ahead for Athletic.

With 2 assists and 22 chances created on the season, Hilton’s importance in this Rowdies’ side cannot be understated. The 27-year-old has been an ever-present in the heart of midfield for Neill Collins’ side, starting all 11 matches. In the reverse fixture at Dillon Stadium, Hilton put in a combative performance, playing all 90 minutes, completing 75 percent of his passes, while making 1 key pass, 2 interceptions, and 6 recoveries.

Tampa Bay Rowdies come into this match at the top of the Atlantic Division table with 8 wins and 3 losses but are coming off a mid-week loss at the hands of in-state rivals Miami FC. The Rowdies locked up back-to-back 1-0 wins in the matches prior including a win at Dillon Stadium on June 26th. Sebastian Guenzatti was the leading man for Tampa Bay, scoring the lone goal in both matches. Hartford’s back line will need to keep an eye on him as the club makes its second ever trip to Al Lang Stadium, the last trip resulting in a 4-0 loss in 2019.