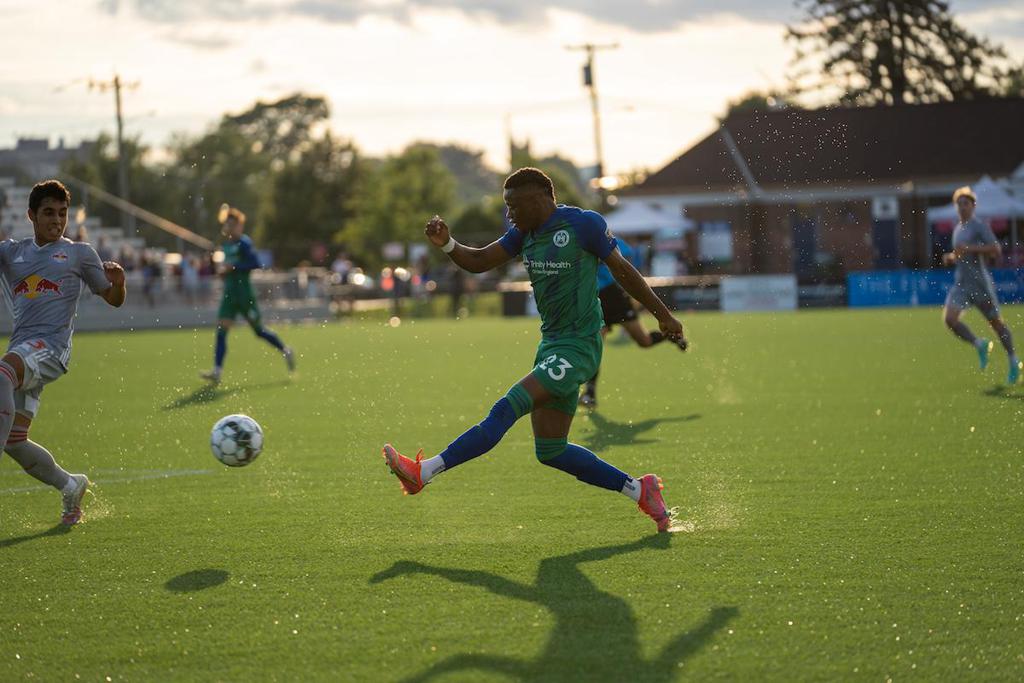 A dazzling start to the season for Hartford Athletic has seen numerous players step into the limelight and deliver exceptional performances on the pitch.  With four goals in the young season, Forward Preston Tabort Etaka stands amongst the most notable contributors on the attack and brings an element of starpower to the team that makes him one of the most entertaining players to watch in the USL Championship.

Born in Bamenda, Cameroon, Preston comes from humble beginnings and grew up in a small, close-knit family.  His parents always preached that education was the number one priority, but soccer was Preston’s passion and he fell in love with the game at an early age.  To Cameroonians, soccer is not just a game or a sport that is played by many, it is a way of life and beloved by its people.

“We are known for playing soccer in Cameroon”, Tabort Etaka, 23, said.  “If you want to be a soccer player, you have to be the best.  “That’s how it is in Africa.”

Preston too had the desire to be great.  His family supported him every step of the way in hopes of achieving his dream to one day play professionally.  He credits his father and younger brother for spending hours outside practicing to help develop his skills rain or shine.

“When I was little, my dad used to set up a goal for me and my younger brother to play 1 v 1”, Tabort Etaka said. “[My brother] was always physical and my dad would tell me that’s how the game is [played]. My dad then discovered that I really loved soccer, so he would push me and do a lot of training.  It was really important that he helped me.”

From the age of nine years old, Preston left his family often to play tournaments for PWD Bamenda’s academy, the team he played on for most of his adolescence.  Being away from his loved ones at first was difficult, but Tabort Etaka was well aware of the sacrifice he was making to help his game blossom to soaring heights.

After careful thought and deliberation with his family, Preston decided to take his talents to the U.S. when he was 18.  His first stop was with USL Championship foe Charlotte Independence, but the Cameroonian did not make any appearances for the team in his time there.

“At first it was tough trying to get used to the system”, Tabort Etaka said. “I was someone that was really hungry to play, but it didn’t really work out there in the end.”

In February of 2021, Preston signed with Hartford Athletic as one of the 16 new additions to the Green and Blue.  He has enjoyed his experience with the club so far and says the atmosphere around the team is like a family, which has contributed vitally to the team’s success on the pitch.

“We have different talents and we are from all over the world”, Tabort Etaka said.  “To be on a team like this is amazing.” We live like a family and that’s what makes us so strongly connected.”

Preston has high expectations for the team going forward and is confident that the boys in green can bring a title home to Hartford.

“We definitely have the talent to win the USL Championship”, Tabort Etaka said.  “We just need to put in the hard work to get there.”