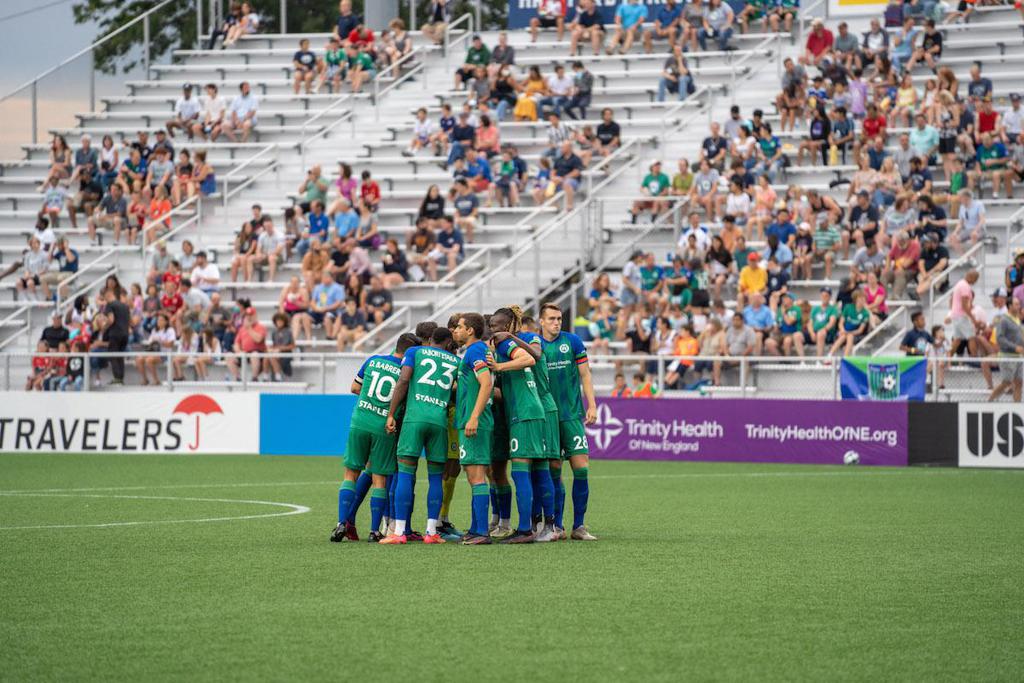 In the shortened 2020 campaign, Hartford Athletic certainly had the talent to win games, resulting in a fantastic record of eleven wins, three losses, and two draws, but came up short in their first ever playoff appearance.

With a busy offseason to reload, six players returned for the 2021 campaign with a new crop of players joining the fold.

As a result, fans were introduced to 16 new footballers determined to make an immediate impact with the squad.  The young and hungry roster mixes talent, with teamwork, experience, and high Football IQ.

In addition to the roster changes, the organization searched for its third head coach following the departure of Radhi Jaïdi.

It was not long after Jaïdi's departure that Hartford found their man in Harry Watling to take over the helm.  Watling, 31, jumped at the opportunity to move to the US and take the reins of a new group hungry to achieve greatness.

The Athletic have come out firing right out of the gates and are one of the top teams in the Eastern Conference's Atlantic Division. The scary part is, it seems like the team hasn’t even hit their stride yet while turning in impressive performances thus far.

Let’s dive deeper and learn more about some of the Boys in Green and what they attribute to the team’s early triumphs.

Defender Younes Boudadi is one of the new signees for Hartford in 2021 and is originally from Ypres, Belgium.  At the young age of seven, he joined Club Brugges’ Academy, about an hour away from his hometown and remained there for 13 years.  He always knew he wanted to become a professional footballer but he didn’t hesitate saying that the sport took away from anything else he wanted to pursue as a child.

“It was challenging in a way because soccer was everything that my life revolved around”, Boudadi said.  “It was a little harder to be away from home when I was young, but you learn a lot about [soccer] from a really young age too.  You sacrifice a lot but you reap the rewards later.”

In his short time with Hartford Athletic so far, Younes has noticed the team’s play on the pitch improve dramatically and sees a title run within range for the boys in green.  “The chemistry is great,” Boudadi said.  “Big props to the coaching staff because I think they have done a great job since day one to build a culture of winning.”

Younes also emphasized the special relationships between the players and the staff away from the pitch, stating, “Just getting to know everyone on a personal level.  It’s always great to meet  guys from different cultures and backgrounds.  I always try to not talk too much about football,  and even though it’s pretty early on in the season, I think people can tell that we are a close knit group and everyone is bought in.”

Goalkeeper Carlos Merancio is also a first year player for the Athletic and was born in Hermosillo, Mexico.  He started to play at the academy level at 12 years old.  At 14, Carlos played for Atlético Morelia academy, eventually skilled enough to play with their second team and train with the guys on the first level.  He then made his way up slightly north to play for FC Tucson in USL League One for two years, often alternating the starting role.

Moving somewhere across the US can be a daunting task, especially for someone like Carlos who is still learning to improve his English, but he was excited for the opportunity to be a part of an organization poised for a deep playoff run.

“I spoke with Luiz [Silva], who told me the project of the team, and I was so ambitious”, Merancio said.  “I then watched some [prior Hartford Athletic] games, and the stadium was always full, which is unusual in the USL.” … “I really wanted to come here.”

Now two months into the season, Merancio has seen developments in his game individually as well as the team’s growing ability to play as one.  To the latter, Carlos attributes weekly Sunday barbecues and flights to away games as events that tremendously help the players build relationships outside of football and enhance teamwork on the pitch in the process.

The Athletic goalkeeper sees no limit to how far the team can advance in the USL playoffs and is locked in on winning a championship. “We are improving every day”, Merancio said. “Everyone supports each other and we are on the right way to build a great team.”

Midfielder Arthur Rogers is one of the six returning players from 2020 and hails from London, England.  Arthur was always kicking a ball around in his house but it wasn’t until he was eight years old when he started to play organized soccer, eventually signing with semi-professional club Hanwell Town as a teenager.

The Green and Blue signed Arthur to his first professional contract after graduating college and straight away he was determined to make an impact.

“I had several combines with different teams where people would get to see me play”, Rogers said.  “Fortunately, it was the first one I went to where (Technical Advisor) Paul Buckle saw me and said straight away that he wanted me [in Hartford].  That kind of feeling where I know he wanted me here meant a lot to me personally.”

In talking about the team’s great start to the season, Rogers praised the coaching staff for their outstanding leadership and intelligence in assembling this year’s squad.

“The recruitment staff really outdid themselves this year”, Rogers said.  “We were really successful last year and I was thinking, can we really top that?  And they have.  It’s very hard to bring in so many new faces and not have egos, and that’s something that we don’t have right now.  Coach Harry [Watling] is a top drawer coach as well, and he builds confidence and trust in the players to buy into his process.”

As an international player, Rogers sacrifices being away from his family for many months of the year, but loves playing for Hartford and cherishes the relationships he’s formed with his teammates.

“I’m so happy that we have such a great environment”, Rogers said.  “I love coming to work everyday.  I know I’m going to be challenged and the boys are going to push me.”

Hartford’s players live together in groups of three and get along like really close brothers.

Hartford has one of the loudest, most passionate fan bases in the USL and with a great squad on the pitch, it's no surprise the supporters pack Dillon Stadium for every home match to provide the best homefield advantage in the league.  So back to where we started: Talent wins games, but teamwork and intelligence win championships.  Watling and the Boys in Green look primed for a deep playoff run but will take it one match at a time.

- Forward Walmer Martinez will be absent from the team for the next three weeks as he competes with the El Salvador National Team in the Gold Cup.

- Forward Bradford Jamieson IV will miss the upcoming match as he recovers from a hamstring injury as will Luka Prpa who continues to rehab a broken foot. Defender Gabi Torres will also miss the match due to a hamstring injury sustained in last Saturday's match.