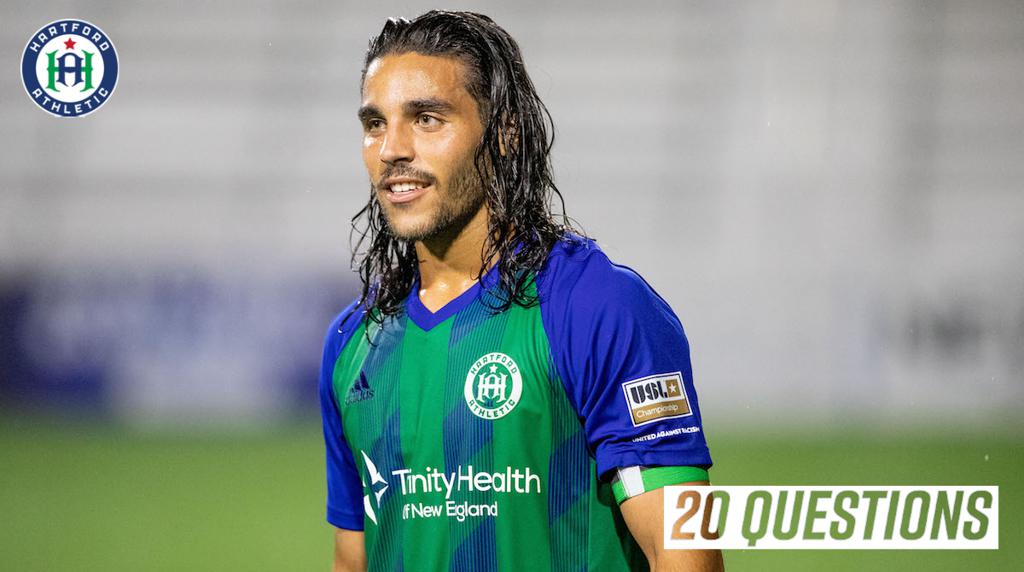 Welcome back to 20 Questions, this week with Nicolás Cardona. Nico talks about his thrilling goal against Loudoun United FC, being named Captain of Puerto Rico's National Team, and more!

1) So we have to start with the Loudoun match. What went through your head in those last minutes?

NC: I remember when we had to go to the locker rooms before the game restarted that coach said everyone has to stay locked in and go and attack. Coach Jon (Stead) said that there would be one hero and that we have to trust each other and stay positive and the breakthrough would come.

2) There was a really big lift in the spirit of the team after the delay. How inspiring or uplifting was Coach Watling’s team talk?

NC: It’s tough because that situation was so weird – I don’t think I’ve ever been in a match where it was stopped that late in the match! But absolutely - Coach did such a good job of keeping us focused to get the next goal.

3) You were recently named captain of the Puerto Rican national team for World Cup qualifier against the Bahamas (congratulations!). How big of an honor was that for you leading the team out?

NC: It’s a feeling that you can’t describe – I’ve been watching the national team since I was a kid. When I was younger, I remember seeing the captains of the Puerto Rican national team, and I always said that I wanted to be the captain. However, there’s a lot of leaders in the squad, with or without the armband.

4) What is your dream for the Puerto Rican national team?

NC: My dream is to qualify for the CONCACAF Gold Cup. I think we can do it and I think we’ll do it in the next couple of years!

5) You are part of a very young Hartford squad, with an average age of about 23 years old. In such a young squad, how do you feel your experience as captain for Puerto Rico has helped the team?

NC: I think wherever I go, I try to help my teammates because we make each other better. As much of an honor it was to be named captain, being captain doesn’t change who I am – I just try to be myself.

6) You are part of the second-best defensive unit in the Eastern Atlantic Division of the USL Championship, with only 7 goals conceded through 6 matches. What do you think has been the secret to this success?

NC: It all comes from what we do during the week in training, and what coach has made us believe - stay tight, keep communicating, and put your body on the line for the team.

7) As I’m sure you know, Hartford has a large Puerto Rican population. How big of a factor was that for you when signing for Hartford?

NC: Puerto Rico has always been a very important part of my career. I want to be an inspiration for the kids of Puerto Rico, so having that large community of Puerto Ricans in Hartford definitely helped my decision. I want to be more involved than I have been for this community, so hopefully I can take some of my time.

8) Who has the best taste in music on the team?

9) So since you are in charge of the music, what’s the best walk-out/pump-up song that you would pick?

10) You can only have one dish per meal (breakfast, lunch, dinner) for the rest of your life. What do you choose for each meal?

NC: Breakfast is easy: avocado toast! For lunch, I’d have to say rice beans and vegetables. Lastly, for dinner nice salad with tofu and almonds.

11) You’re building your ultimate player and have to choose the following parts: speed, strength, intelligence, vision, tackling, and stamina. Which player do you choose for each of these traits?

12) Which is better: La Liga or the Premier League?

NC: I like La Liga more because I’m a Barcelona fan, but the Premier League is definitely the better league at the moment.

13) Who do you think will win La Liga next season?

NC: I think Barcelona will get back on track and win La Liga next season. The signings they’ve made so far have been a positive sign for the club.

14) Who are you rooting for at the EUROs?

NC: I’m watching Copa America a little more than the Euros, but if I had to choose a team, I’d say Spain. At the Copa America, I’m definitely supporting Argentina; I’m a huge Messi fan!

15) Which two teams would you like to see in the Copa America final?

NC: Argentina vs Brazil at the Maracanã would be the dream final.

NC: It has to be the Jabulani for sure!

NC: Soccer boots? I would say Danny Barrera because no one else has the boots that he has.

18) Who has the worst fashion sense in the squad?

NC: Ooh…I’m going to say Tulu (laughs). He came in wearing a t-shirt saying “bad times, good times” all over the shirt which was funny.

19) What is your favorite part about being in Hartford?

NC: I love Blue Back Square – just the area in general, there are a number of restaurants and bars, plus it’s nice to just walk around that area.

20) What’s the biggest thing you want to achieve with Hartford Athletic?

NC: Win the league of course! On a personal note, I would like to make a statement on the league. Specifically, I want the league to know that there are a lot of talented Puerto Rican players, both here and across the world.

For our last interview with Nii Armah Ashitey, click here.