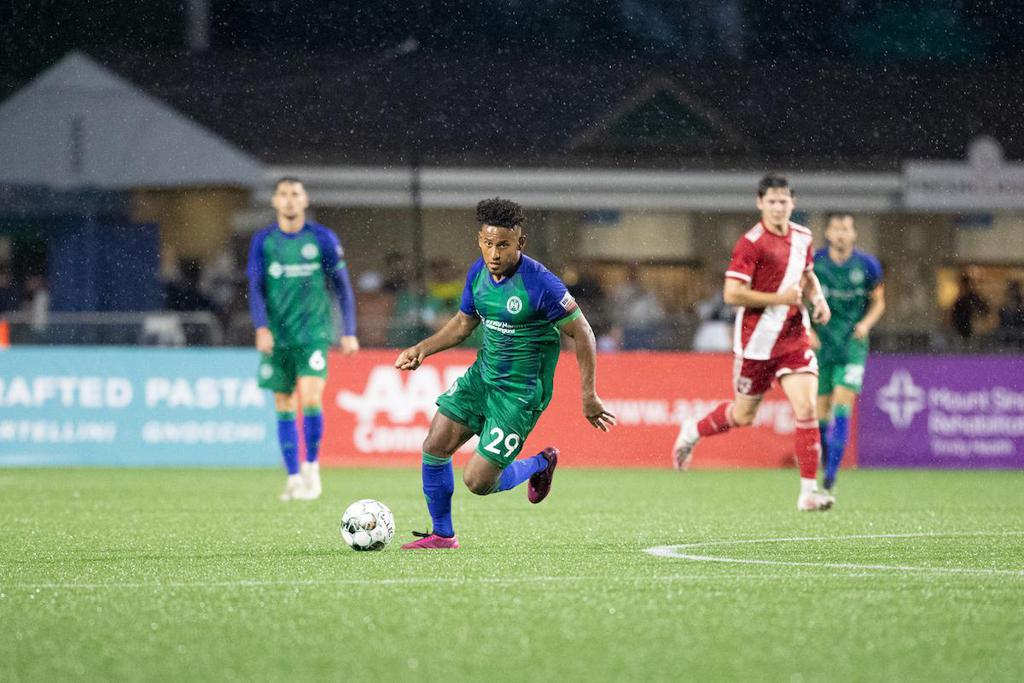 Another night at Dillon, another stoppage time goal! On a stormy night in Hartford, which saw the match against Loudoun United delayed in the 88th minute due to a severe thunderstorm watch, Nico Cardona conjured up a 96th minute winner, sweeping home a low cross from Younes Boudadi that was pushed back into the center of the box. Nico’s winner came a full 90 minutes after Juan Carlos Obregón Jr. had opened the scoring with a deflected effort past Loudoun goalkeeper Jermaine Fordah.

All over the world, the game has evolved to where fullbacks are a crucial piece of any attack, and that is no different in Hartford. Gabi Torres has been a mainstay in this Athletic side, recording 3 assists and 2 clean sheets in 5 matches, while only missing one match due to injury. His devastating left foot has been a focal point of Hartford’s attack. On the opposite side, Younes Boudadi has had a wonderful three-game stretch. His highlight performance so far came against Loudoun, with a pass success rate of 75 percent, a tackle success rate of 50 percent, 8 duels won, 2 interceptions, 6 recoveries, 3 crosses and 2 key passes. One of those key passes led to Nico Cardona’s winner, and highlights the emergence of two strong wing-backs who truly make Hartford unpredictable when they attack the opposition’s goal.

Saturday was a day of massive achievements for members of our Hartford squad. Conor McGlynn and Alex Lara became the 23rd and 24th players to log 1000 minutes for Hartford Athletic. This is a massive achievement, not just for Conor and Alex, but also for the club; there are currently only three other players on the roster with more than 1000 minutes played for Athletic: Danny Barrera, Arthur Rogers, and Gabi Torres. Danny Barrera is also only 5 appearances away from overtaking former teammate Alex Dixon on Hartford’s all-time apperances list.

After opening the scoring against Loudoun this past Saturday, Obregon took his goal tally to 4 for the season. The 23-year-old has already equaled his goal tally from his time with Rio Grande Valley FC, who currently sit top of the Western Mountain Divison on 17 points after 9 matches. With Juan Carlos being a part of the most talented forward line in club history, Saturday’s match at Dillon will be a huge opportunity to continue his solid start to the season.

The diminutive Uruguayan has had a blistering start to the season, with 6 goals and 1 assist through Tampa Bay’s opening 8 matches. Guenzatti has scored two goals against Hartford, with both coming in an unforgettable 4-0 defeat in Florida. While Hartford kept Guenzatti quiet on Tampa Bay’s last visit to Dillon Stadium, the center forward will be looking to add to his impressive record for Tampa Bay on Saturday, as he has scored 42 goals in 98 appearances for the Rowdies.

Saturday’s match is one that Athletic fans have had marked on the calendar since the fixtures were released in February. After 8 matches, the Rowdies sit 5 points clear of Athletic, albeit having played 2 more matches. While Tampa won their first 5 to start the season, they have taken 3 points from their last 3 matches, with defeats to Charlotte Independence and in-form Pittsburgh Riverhounds coming either side of a last-minute win against Loudoun United. In the head-to-head history between Hartford and Tampa Bay, both sides have each won 1 match, with Hartford scoring a last-minute winner against the Rowdies on their last visit to Dillon.