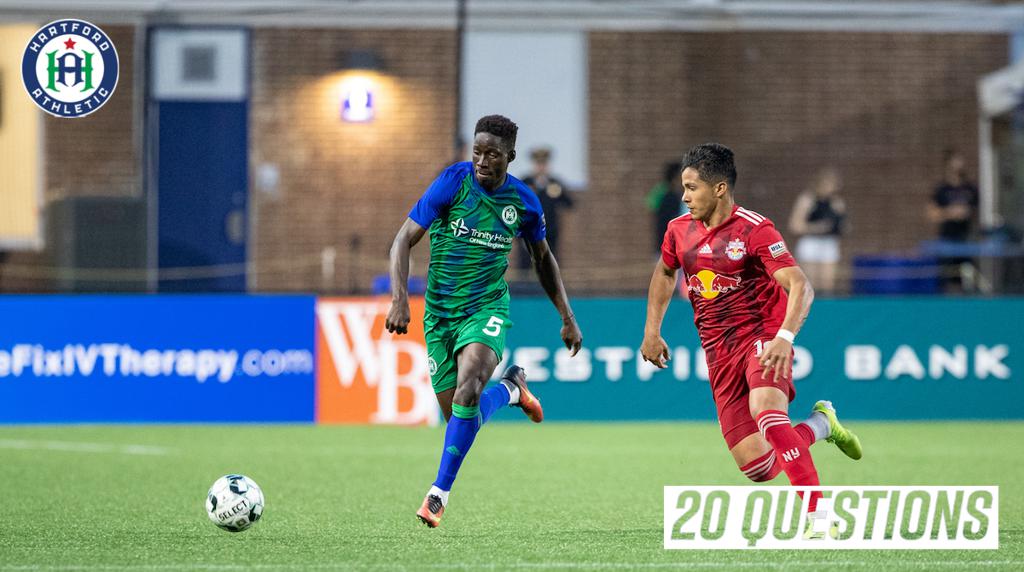 Welcome back to 20 Questions, this week with midfielder Nii Armah Ashitey. At just 21 years old, Nii makes his first foray into American soccer and shares a little bit about his time playing in his home country of Ghana. Plus, a shocking revelation about his favorite television show!

1) When did you start playing football?

Nii: I started playing when I was very young. Growing up in Ghana, everyone dreams of playing football and there are so many talents in general. Unfortunately, there are not enough facilities or opportunities in Ghana.

2) Which players do you base your game off of?

Nii: I would say I base my game off of… Nii Armah Ashitey! I think I have my own style of playing and that I’m my own champion on the pitch. If I had to pick a couple of players I enjoy watching, however, I would probably pick Ngolo Kante and Sergio Busquets. Kante’s energy and Busquets’ reading of the game are amazing to watch.

3) What do you enjoy most about playing in the defensive midfield/deep-lying midfield role?

Nii: My favorite part about playing in this role is being able to control the game. As a deep-lying midfielder, it’s unique because I get to control the game. I am able to read the game, make interceptions, and make important passes, which are three of my best qualities as a player.

Nii: I think for sure the biggest difference is the quality of the pitch! In our matches here, we’re usually playing on really nice turf pitches. I would also say that the pace of the game is a lot quicker and more frantic in the USL compared to the Ghanian Premier League – there’s a lot of quality across the league.

5) If you had a FIFA Ultimate Team Card, what would it look like?

Nii: This is a funny question – I’ve never played FIFA, so I’m not sure what my Ultimate Team card would look like!

6) A big part of becoming a footballer is about overcoming adversity. Even at such an early stage of your career, what kind of adversity have you faced?

Nii: Absolutely - I think a little adversity is important in any football player’s journey. I’d say at any club I’ve played at, I’ve faced so many challenges. At one of my first clubs, I was behind so many players in my position, but I became better from having to overcome adversity and pushing myself to the starting position.

7) Coach Watling has had a great impact on the club – what has his impact been on you?

8) What’s one thing you would tell yourself when you first started playing football?

Nii: Definitely a tough question - I would say be determined, disciplined, and focused. If you make sure you have these qualities, you will have whatever you want!

9) You’re in a cup final. Would you rather: score the winning goal or make a match-winning tackle?

Nii: I wish I could score! Of course, if I have the chance to score, I would love to take that; however, being a deep-lying midfielder, I’m not always close to the goal, so it’s more likely that I’d make a match-winning tackle.

Nii: I have to say it – but both. It’s so hard to decide between two players who have rewritten the history of football!

Nii: That’s a tough one for sure – those are all brilliant teams, but I think that Barca team would be my choice. The front three of Messi, Neymar, and Suarez

13) You’re at the end of your playing career and you’re choosing your next path: what would you like to become after you retire?

Nii: I think I would like to become either a coach or an agent. I feel like my focus and discipline that I have as a player would translate well into a coaching role. But I also think that I would have fun as an agent – maybe like Mino Raiola, just not as controversial!

14) Who would you say your favorite club is?

Nii: I’d have to say Liverpool. I love their style of play, but I also enjoy watching Barcelona play, especially the team from 2010/2011 who dominated possession.

15) You can only pick one of these three competitions to watch for the rest of your life: the English Premier League, the Champions League or the World Cup. Which do you choose and why?

Nii: I think I would have to choose the Premier League. I’m a massive Liverpool supporter as well, so I couldn’t imagine not seeing my favorite team play every week!

16) Who would you rather play for: Guardiola or Klopp?

Nii: It may come as a shock, but I’d rather play for Pep! Even though I love Liverpool, and Klopp as a coach, playing for Guardiola would be my choice.

17) Who are some athletes outside of football who inspire you?

Nii: The first one that comes to my mind is Usain Bolt. I admire his drive, determination, and discipline. Whether he’s in an interview or in a race, he is so professional and focused – he’s the greatest ever for a reason!

18) Hartford Athletic hosts clinics for players ages 6 and up. What is one piece of advice you would give to the young footballers who are attending these clinics?

Nii: When you are here, be brave and do what you are best at. You are here for reason, and there is no better chance to express yourself!

19) If you could pick one member in the squad who would get five-star skill rating in FIFA, who would it be?

Nii: That’s tough – we have so many skillful players in the team who could have five-star skills. I think if I had to pick one, I’d say Preston!

20) What does it mean to you to have fans back in the stadium?

Nii: It means the world. It’s really not a lie when we say we have the best fans in the world, and seeing them at Dillon makes us want to win our matches for them even more than we already do.

***
For our last interview with Thomas Janjigian, click here.