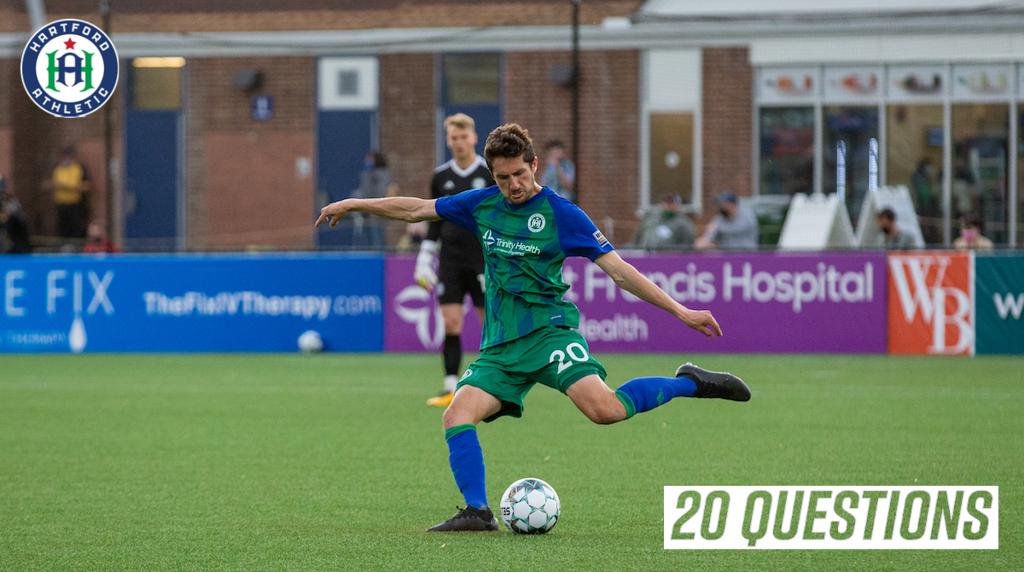 Welcome back to 20 Questions, this week featuring center back Thomas Janjigian! Thomas talks to us about when he realized he would be a pro footballer, getting engaged, and giraffes....?

1) What was your favorite team growing up?

TJ: It would have to be Chelsea. When I was younger that’s the team my dad and my brother watched all the time and I kind of just stuck with that. Still one of my favorite teams to watch for sure.

2) When did you decide that you wanted to be a professional soccer player?

TJ: I thought about it early. When I first started to play, I saw how professional soccer players got to where they were, and I wanted to be like that. But it never really hit me until probably my sophomore year in high school when I really felt like I could take this to the next level and make a career out of it.

3) I saw some pictures of you with a surfboard, how good are you at surfing?

TJ: I’m not good at surfing, my sister is good. I can stand up it’s just that right when I stand up I nosedive, I don’t know how to balance very well.

4) Does pineapple belong on a pizza?

TJ: I think so. My favorite type of pizza is jalapeno, pineapple and pepperoni, so I would have to say yes.

5) Which player in the world do you think has a similar playing style to yours?

TJ: I would say Aleksandar Kolarov. He just has a very powerful left foot and knows how to spread the ball and distribute.

6) What’s the best thing about California?

7) How are you feeling about moving to the east coast?

TJ: I’m excited. It’s going to be a really different experience, it’s just a whole different vibe there, but I’m really excited to be on a new team and show the coaches and the staff what I can do.

8) When where you more nervous, when you made your pro debut, or when you recently proposed to your fiancé?

TJ: Oh my god… Definitely pro debut. The engagement was more like nerves for the preparation to be correct, I wasn’t really nervous for actually saying what I needed to say, it was more like just the preparation. My first game I was definitely very, very nervous, the anxiety levels were going through the roof. It was like that up until I stepped on the field, then things were all good.

9) What’s the best advice you’ve received that has impacted your performance on the pitch?

TJ: One of my college coaches told me to be smart and stick to my strengths. I feel like when you’re on the field and you do things that are out of your comfort zone, that’s when you make mistakes, and I think sticking to your strengths is a good idea for sure.

10) Describe yourself in three words

11) What is your biggest career goal before you retire?

TJ: My biggest goal is to get to the MLS. If I was to get there then I would probably have another goal after that but that’s my biggest goal as of right now, that’s been my goal my whole life.

12) Why did you decide to come to Hartford Athletic?

TJ: The coaches seemed to value me more than in other places. I got multiple interest but nobody really seemed to jump at me like Hartford did and I feel like that definitely shows that they value me as a player.

13) How do you see the team so far this season?

TJ: I think we're a good squad, very hard working, very ball oriented, keep the ball all the time kind of side. I think we’ll play guys often off the pitch for sure.

TJ: It would have to be Breaking Bad. Recently… I don’t know, Game of Thrones has to be up there too.

15) What’s been the most challenging moment in your career?

TJ: Definitely when I tore my ACL during my second year of college. The process of rehab and everything you have to do for that is very tough, it’s mentally and physically challenging. Yeah, that’s definitely one of the toughest things I’ve went through.

16) Who’s your favorite player in the world?

TJ: Messi, one hundred percent. He does magical things with the ball every time we watch him, especially when he was younger. He’s the best.

17) Is there any other athletes you look up to outside of soccer?

TJ: Yes, I’m a huge basketball fan so I look up to all of the greats. LeBron, Kyrie, Anthony Davis.  All those guys that are just out of this world good.

TJ: That’s a tough question… people call me a giraffe because I’m so tall, so let’s go with that

19) What was one of your new year’s resolutions?

TJ: To gain weight or put on muscle wight. As a defender, people like to see more physical looking guys. Coaches have told me about it all my live so yeah, that’s definitely a goal of mine.

20) Where do you see yourself and the team a year from now?

TJ: I see us making the playoff this season. I see myself doing well enough that the coaches like me and I can stay here for another year so we can continue to show what we can do and go to the playoffs again.