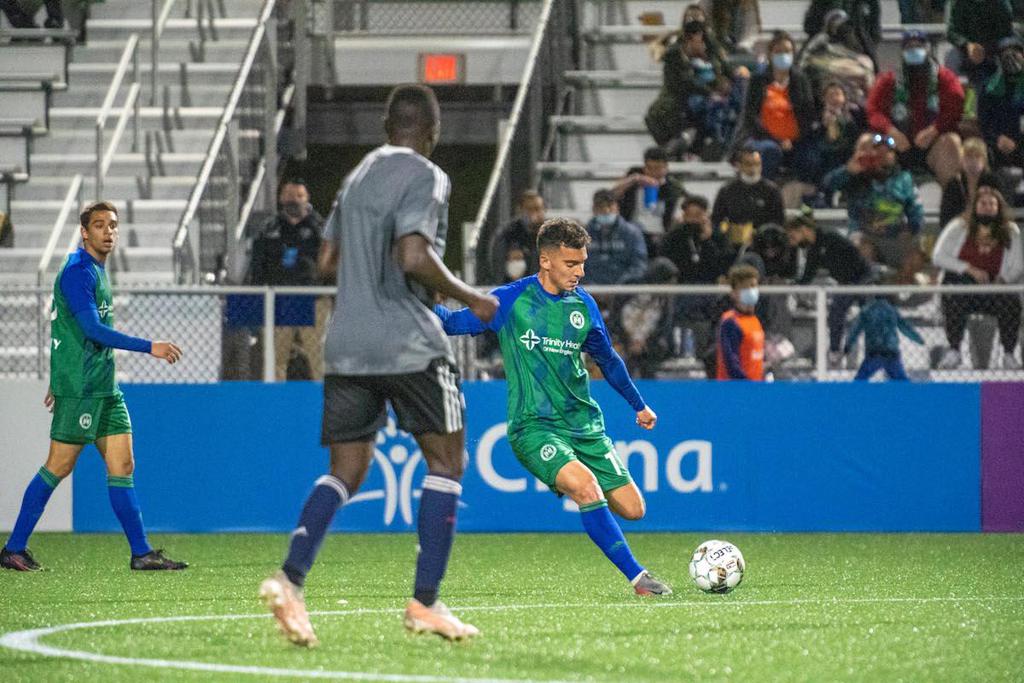 Welcome to a new season of 20 Questions! We have a slew of new players on this year's roster and that means new interviews every week! This week, we start with the hero from Saturday night's match, Luka Prpa. Luka headed in the tying goal in stoppage time to steal a point away from Pittsburgh. He shares his history in soccer, what makes him such a big Manchester United fan, and the first thing he'd do if he found a winning lottery ticket.

1) When did you fall in love with the beautiful game?

LP: I don’t think there’s necessarily one moment that I fell in love with the game. I do come from a huge soccer family though; my Grandpa played as did my dad, my brother, and my cousins. From the minute I could walk, my dad would throw beach balls to me and I would head it back to him. I think the most memorable moment was playing at my grandpa’s house with my brother and our cousins in the summers while our parents were working.

2) You grew up in Milwaukee; what was it like for you playing the game growing up and what did it mean to you to represent your ‘hometown club’ Marquette?

LP: I committed to Marquette around sophomore year of high school, and was also looking at schools like UCLA, Stanford, and University of Wisconsin. However, playing at Marquette was so special for me for one really big reason. Playing so close to home meant that, when I looked into the stands, I had my whole family there – I’m not sure I would have had that same feeling elsewhere.

LP: When I was about 12 or 13, I was more of a forward. As I got older though, my coaches saw me as more of a creator, someone who could set up attacks from deep.

4) What was it like to celebrate in front of the Dillon crowd after scoring the game tying goal on Saturday night?

LP: It was amazing. At the time, I was happy for a second and then wanted to go on and get the next goal – but yeah, it was special because we haven’t played in front of fans in so long. Obviously, you’re always happy to score, but when it’s in front of your home fans, it’s hard to put in to words.

5) With 7 points from a possible 9 it’s been a flying start to the season. How has Coach Watling impacted the squad so far?

LP: He’s had a huge impact on the squad. You’ve heard him talk in his press conferences about how he wants us to express ourselves, and that’s exactly what we aim to do every match. We’ve also worked on being good both in and out of possession, so that we can win in different ways, and that’s a testament to him as a coach.

6) You have a cousin who also plays professionally. What is it like having a fellow professional in the family?

LP: I do yes! My cousin plays in the second division in Italy. It was really fun growing up with him because we’d have 2v2 games all summer at my Grandpa’s house where it would be him and his brother versus me and my brother. We’d use two trees as goals and play until the day was done.

7) Who are your inspirations?

LP: This was actually a question the coaching staff asked us in preseason – we ended up sending in pictures of who we play for and made a poster board, so we have a nice collage of all of our inspirations in the locker room. For me, my main inspiration is my family. The picture I put up was from my senior day at Marquette. I walked with out with my mom, dad, brother and grandpa. I think my grandpa might be the biggest part of that group; he has five grandkids, and whenever we’re close, he’s always there. I actually always know where he’s standing! He’ll be at the corner of the field on the side that we’re attacking, and he’ll be leaning on the fence. The funniest thing is, no matter the noise on the field and what everyone is saying, I only hear what he says!

8) Do you have a match day routine?

LP: Absolutely. I think it’s very important to have a routine so you can control as many things as possible on match day. When I wake up, I typically eat a bigger breakfast, so that I don’t end up snacking as much. When I start snacking, I end up eating too much, so I do my best to stay away from that. After breakfast, I’ll go for a walk in the late morning, stretch out after, then take a nap for about thirty minutes to an hour - anything more I get too tired. I’ll wake up from the nap, then take a shower, and get my pre-match meal - I’ll typically eat anything that has rice, pasta, chicken or vegetables. Then it’s off to the match!

LP: I’m a big Nike boots guy. When I was younger, I did love the cleats Adidas made around 2010. The black and yellow F50s that Diego Forlan wore at the 2010 World Cup are some of the best boots I’ve ever seen.

10) If you could visit one stadium in the world, where would it be?

11) Which European club do you support?

LP: Oh, I’m definitely a Manchester United fan! When I was growing up, I had the red home, white away and blue third jerseys that they wore when Cristiano Ronaldo had that stellar season.

12) Who is your favorite player at United?

LP: I would say Bruno Fernandes is my current favorite, but I’ve always admired Juan Mata. He’s the only guy in that team with a Champions League winner’s medal, and him in his prime was absolutely amazing to watch. He still offers something so different to the team and, even though this may be his last season at United, hopefully he’ll be able to go home to Spain and enjoy the rest of his career if he doesn’t end up staying in Manchester.

13) City and Liverpool are two of United’s biggest rivals. Are there players you admire on either of those squads?

LP: I think, when he was there, I loved David Silva. Even though he’s moved back to Spain, when he was in the Premier League he made everything look so simple whenever he was on the pitch. He was also a lefty, which I loved! For a player on Liverpool, I would say Thiago is my favorite. Even though he doesn’t really fit the way Liverpool play, watching the way he controls the game and is composed whenever he’s on the ball is great to watch

14) You can only win one: Champions League or World Cup?

LP: Oh, World Cup 100 percent. We were actually talking about this in the locker room the other day, when Karim Benzema got called back to the French national team after they shunned him for the past 6 years. The guy already has 4 Champions League titles, but missed out on his country winning the World Cup in 2018. I feel like you can’t beat that feeling [of lifting the World Cup] because that’s who you belong to you know? When you lift the World Cup, there’s this added sense of pride and achievement because you did it for the people you’ve grown up playing with and for your country.

15) What is the best gift you’ve ever received?

LP: Wow… this is a tough one. I don’t know if this is the best gift I’ve ever gotten, but when my brother and I were younger, we got an Xbox 360 for Christmas, which was just a dream for a kid. I used to get the new Manchester United jersey before each season as a gift as well, although I haven’t gotten the last few. I think no matter how old you get, getting your favorite team’s jersey is something that can always bring a smile to your face.

16) You can pick one moment in sport history to be at live. Which one do you choose?

LP: I think if I had to name a couple, I would choose the 1999 Champions League Final when Manchester United won against Bayern Munich in the last few minutes, or watching Michael Jordan play. I also think any match of the 2010 World Cup would be amazing to be at – that entire tournament just radiated good vibes!

17) Your car breaks down and you have one call you can make. Which squad member do you call and why?

LP: I am for sure calling Jeff (Caldwell) – he’s very knowledgeable. Let’s say we were talking about a movie or TV show; he’ll know who wrote it, directed it, and the names of all of the characters. I think he’d also know how the ins and outs of how to change a car.

18) If you had to give a superlative of class clown to someone in the squad, who would it be?

LP: I think we also talked about this in the locker room the other day. I feel like there are two people who are the class clowns in the squad - Nii (Armah Ashitey) is the guy who is always cracking jokes and making people laugh while Conor (McGlynn) ends up cracking people up without even trying.

19) You walk out of training and find a winning lottery ticket worth $10 million. What’s the first thing you do with it?

LP: The first thing I’d do… I’d probably make sure its correct! I think at first, I’d be speechless and have to contemplate what it is I would do. In terms of the first few things I would do for myself, I would probably buy my parents a nice house, and fly my family to come to all the games. I’d like to donate a good amount as well, but I think the most extravagant thing I would do is buy a house somewhere in a nice vacation spot like Greece. I know on my mom’s side, she has five sisters and more extended family, everywhere from Serbia to Canada to California. They’ve always talked about doing a reunion in Greece, so if we had a house that was all paid for, it would definitely happen!

20) We’ll have our first game at 100 capacity on May 29th. What’s one thing you want to say to the fans before that game?

LP: Let’s get the stadium rocking. I think coach has said it before, but the fans really are our 12th man. In the last game when we scored that goal, that may not have happened without the fans. Of course, we’re always pushing to the last minute, but the fans can really win you games. If you think about Liverpool and their fans, they had a run where they didn’t lose at home for almost three straight seasons. Our fans are up there with the best of them, and with them, we can definitely live up to the name Fortress Hartford.