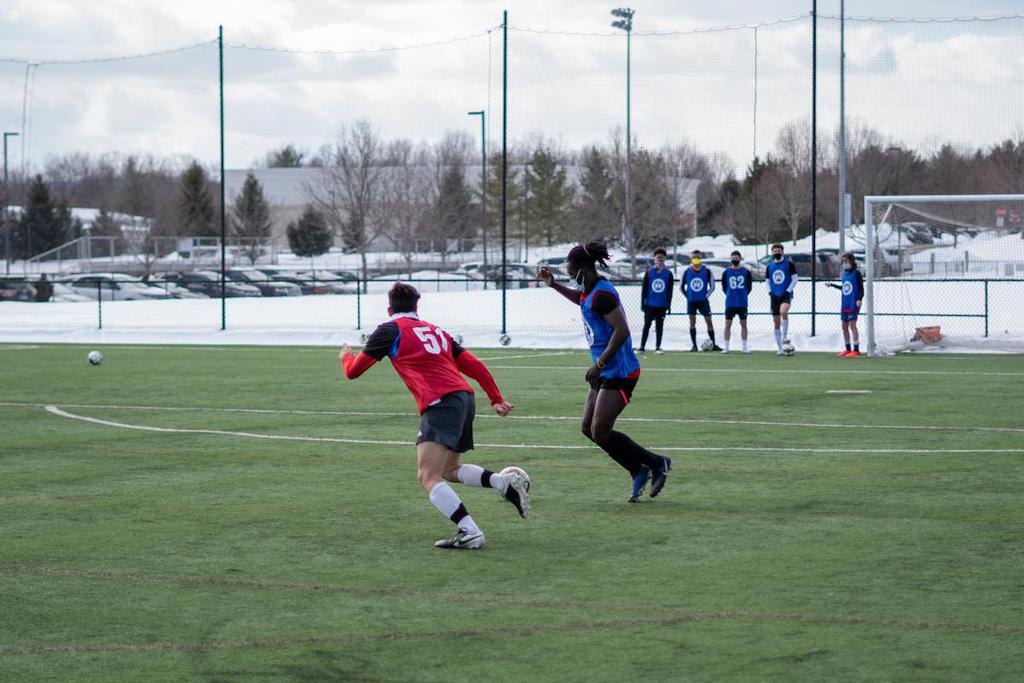 Welcome to this week’s edition of The Roundup, where we keep you updated on all things Hartford Athletic, as well as what's going on around the United Soccer League and the Soccer world. Last weekend, players from Connecticut, New York, New Jersey, and Massachusetts attended the club’s annual open tryout. Find out which players were invited to our Invitational Combine, the next step before an invitation to preseason!

Hartford Athletic's 2021 Open Tryouts were held over two days at the Farmington Sports Arena. On Saturday, 66 players from all over Connecticut showed their skills for the technical staff’s perusal. On Sunday, 38 more players from NY, NJ, and MA put their ability to the test as well.

"Open Tryouts was an amazing event and everyone at the Club should be congratulated for their efforts," said Hartford Athletic Head Coach Harry Watling. "Also a huge well done to all participants. Luiz (Silva) and the technical staff did a fantastic job creating an environment to evaluate the talent, and after reviewing the film, I am delighted with the overall standard. I can't wait to meet the successful trialists moving on to the next step at the combine."

“As a collective staff we were impressed with the quality on both tryout days," said Luiz Silva, First Team Assistant Coach and Director of Scouting and Performance Analysis. "The players were able to create a competitive and energetic atmosphere. We have chosen a strong and diverse group of players to advance to our Invitational Combine. The staff is eager to see more of their potential and assess them in this higher level environment while they compete for a chance at joining our roster."

The following players have been invited to the Invitational Combine:

Nermin Buljubasic (CDM/CB; Staten Island): Former FA Euro, has experience in youth international competition in Europe (Viareggio Cup) and tried our for Udinese and trained with FC Koper in the past (Slovenia). Has Bosnian background.

Chase Lane (ACM/CM; Brooklyn, NY): Received offer from Brown and Syracuse but took a gap year. Youth international experience in training with West Ham and Fulham FC between 2013 and 2016. Signed with SF City in USL2 for 2020 before the cancellation.

Joshua Hernandez (ACM/FW; Hurleyville, NY): Former Cedar Stars and FC Westchester Academy, went to Colombia in 2018 and played in lower levels there until 2020.

The Combine will take place in two weeks in the lead up to preseason. A minimum of one player from each Open Tryout age group (16-19 and 20+) will earn an invitation to preseason training.

Dike was picked 5th overall by Orlando City in the 2020 MLS super draft. He spent one year at the University of Virginia where he won the  2019 NCAA tournament Most Outstanding Player. Dike also scored 3 goals in 4 appearances for OKC Energy in the USL.

The forward impressed in his first season with Orlando City and at the MLS is back tournament, helping them reach the semi-finals. Dike was an integral part of their attack. In January, Dike secured a loan move to Barnsley, who plays in the English Championship.

Dike played a role off of the bench in his first few matches with Barnsley. After a couple of promising performances, Dike finally found the net this past week. With a 1-0 lead, Dike iced the game for Barnsley with a fantastic finish in the 90th minute. His path from a USL team and through the College system will only serve as motivation for USL and collegiate athletes in America.