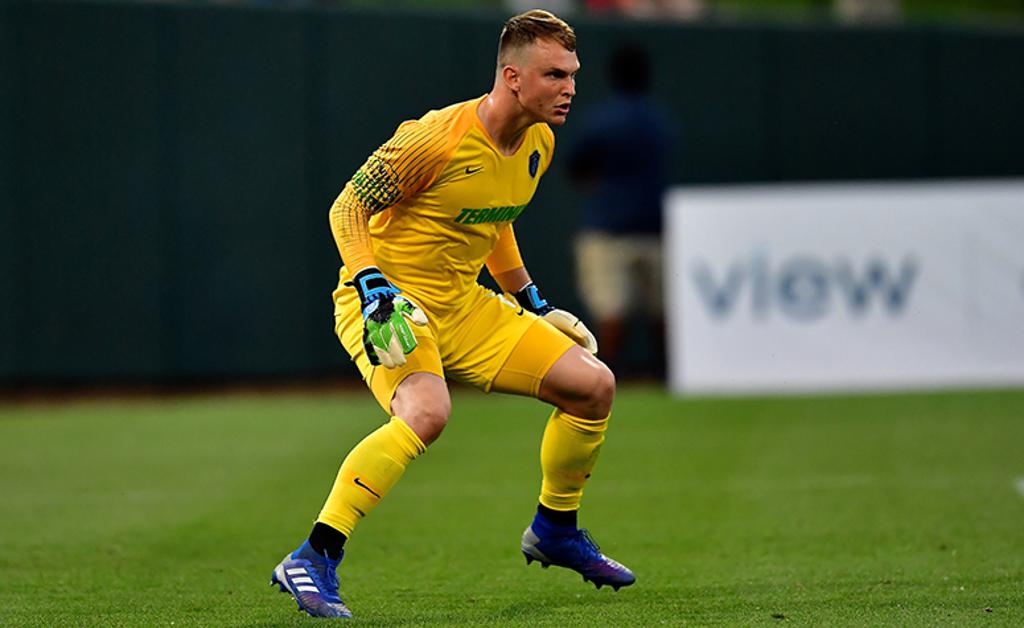 Hartford Athletic may have found its next starting goalkeeper, with the club announcing Wednesday that it has signed Jeff Caldwell for the upcoming USL Championship season.

The 24-year-old isn’t guaranteed the No. 1 role by any means – Hartford also signed Carlos Merancio after time with FC Tucson in USL League One – but he’ll have every chance to impress new head coach Harry Watling before the 2021 campaign gets underway.

“You can train as much as you want, but if you want to be successful you need to build a critical mass of game experience in order to progress and be where we all want to be, which is playing at a high level into your mid-30s and beyond,” Caldwell said via a Zoom interview. “That’s my number one goal for the year, to train well so that I can earn the time in the games and hopefully build consistency and be part of a winning club. That’s a little bit of a clichéd answer, but sometimes clichés ring true.”

Caldwell returns to the USL Championship after spending the 2019 season on loan with Memphis 901 FC, making 28 appearances for the then-expansion team. The former U.S. U-20 international was at New York City FC after being selected in the 2018 MLS SuperDraft out of the University of Virginia, though couldn’t nudge past Sean Johnson, who’s part of the US men’s national team player pool.

While Caldwell has seesawed between the country’s first and second divisions, he knows how challenging the season ahead can be. He’s not entering with ego after getting exposed to MLS.

“The first thing you have to do is respect the league,” Caldwell said of the USL Championship. “It’s a quality league, it’s a difficult league to find success in. It’s not just being consistent in your habits and play, but being consistent in how you’re aggressive and competitive every game. It’s not a league that forgives a night off because there’s a lot of parity.”

That humility surfaces as Caldwell reflects on his season with New England, too. He feels that he progressed while learning alongside Turner and Knighton, even if first-team minutes didn’t arrive.

Caldwell might have been loaned to Revolution II (USL League One) under normal circumstances, but COVID-19 pandemic protocols around player movement made that difficult. He said there was a mandatory 10-day quarantine period when switching teams, though both teams used the Revolution’s training facility in Foxboro, Mass.

“There’s no third ‘keeper who’s happy being third choice,” Caldwell said. “You’re always working to progress no matter what spot you’re on the depth chart. But for me, the delicate balance is working as hard as possible to climb out of that hole while also understanding that one of the most meaningful ways you can contribute is by always putting the team first. You’re the guy, if someone needs extra reps, you’re staying after.”

Should Caldwell beat Merancio for the starting role, he’d give Hartford a solution post-Parfait Mandanda. The Congolese goalkeeper spent 2020 on loan from Belgian side Charleroi as the Blue & Green made the playoffs for the first time. Caldwell is also the second Hartford goalkeeper with Revolution experience after Cody Cropper (now with FC Cincinnati in MLS) played nine times while on loan during the 2019 season.

Now, as more signings get announced, Hartford plans to convene for preseason in mid-March. The USL Championship aims to start competing in 2021 on or around May 1, with the league divided into four divisions for a 32-game schedule.

“There’s a methodical approach here, both in management and the hiring of coach Watling, to build something that lasts,” Caldwell said. “It’s not just on the field, but an overall approach of development and who we’re going to be as a club. That’s exciting to be a part of.”

Jonathan Sigal is the Director of Content for New England Soccer Journal, overseeing all print and digital efforts. You can email him at jsigal@nesoccerjournal.com or follow him on Twitter @JonathanSigal.