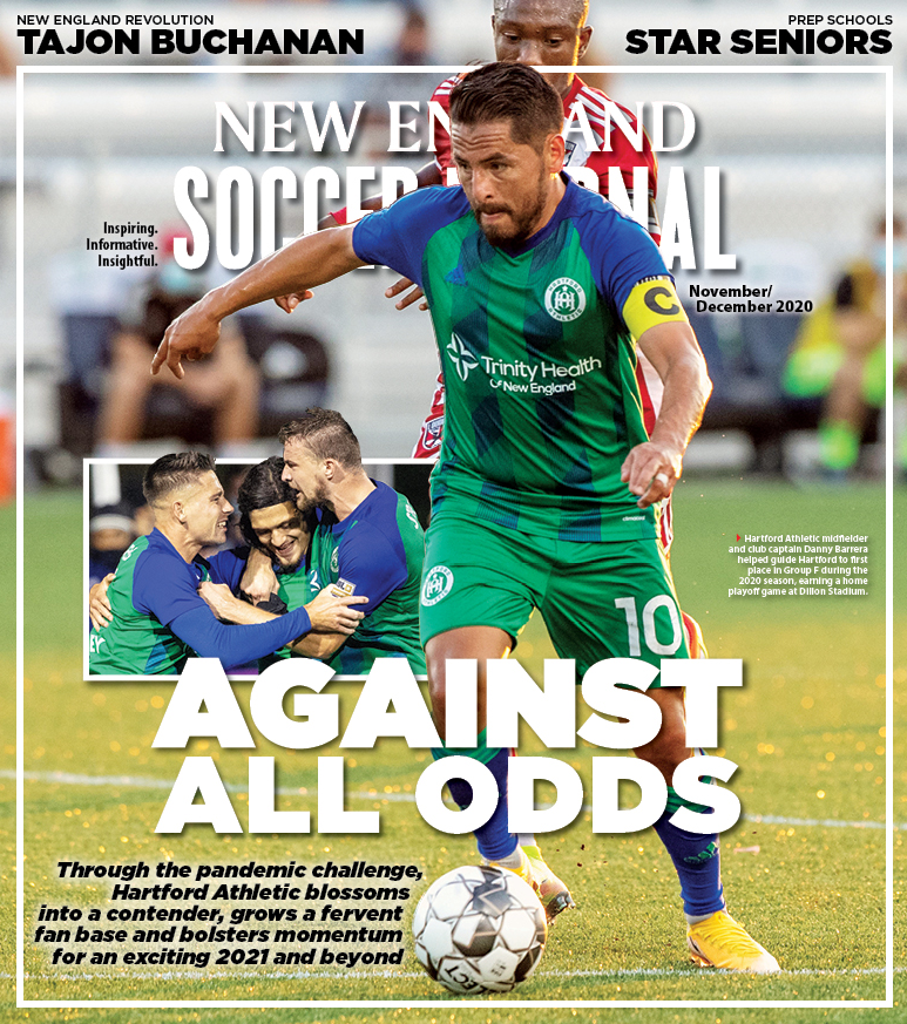 To call the 2020 USL Championship season unusual would, objectively speaking, be a massive understatement.

The simple version: The COVID-19 pandemic ensured matches were halted just as they began last March, and the Nov. 1 final was cancelled amid a spike in positive coronavirus cases. The championship match between Phoenix Rising FC and the Tampa Bay Rowdies would've had New England connections, too, with center back Damion Lowe (Hartford alum) and forward Lucky Mkosana (Dartmouth alum) both in contention.

In between, clubs were split into eight geographic-specific groups instead of their usual Eastern and Western conferences, then marched through 16 regular-season games starting July 11. A limited number of fans were also in attendance where allowed, with ownership groups especially dependent on gate revenue.

If you outlined that structure to fans back in preseason, when excitement about 2020 was building, odds are anyone within earshot would scoff at its abnormal nature. It’d be hard to blame them; it became the new normal, but there’s nothing typical about it.

To localize things, that big-picture perspective wasn’t lost on Hartford Athletic chairman Bruce Mandell as he reflected upon the Connecticut-based club’s second season. Look no further than their opener against Loudoun United FC, D.C. United’s (MLS) reserve team, at Dillon Stadium on July 20 with attendance capped at 25 percent capacity.

After months of planning with state and local government officials, policies such as mask-wearing, hand sanitizer stations and non-touch ticket scanners were employed. The COVID-19 pandemic had reached its fourth month, and the game offered a revealing moment after questions arose about the season returning whatsoever.

“We really didn't know if all the plans would work,” Mandell said. “We were confident and put a lot of time into the protocols, but that first night on ESPN2, fortunately, was pretty impressive. The fans were serious, people were wearing their masks, they were staying socially distant. We went around as a group and reminded fans of everything.

“We knew that night would make or break it. If we could establish ourselves as confident in terms of our fanbase wearing masks, we knew the city and state would grow with us. They did and it was really exciting to see.”

Mandell had confidence that games would return when the pandemic’s first wave got under control through May and June. He added that there weren’t league-level discussions about cancelling the season altogether, rather how many games they’d play and how it’d all work economically.

The dollars and cents would prove pivotal, Mandell said, given the budgets for USL Championship teams. The expenses simply would outweigh revenue, so they made the decision to absorb additional losses and bet on mid-term and long-term growth.

To help lessen the blow, USL Championship teams positioned themselves to welcome fans and deliver something tangible to sponsors. Hartford did the same, with Mandell noting it was “so important” to keep their supporters engaged.

The unexpected hiatus provides a glimpse into the economic knife’s edge of second-division soccer in the United States, where it’s a ticket-driven business. But when could things, financially speaking, tilt back to stability? Mandell said that probably won’t come until the first non-COVID year, and he’s calling the interim period Project Breakeven. He predicted they’ll be at 40 percent capacity at Dillon Stadium next year.

“I don't have a crystal ball, but it's what we're planning and that's why there's a big push for season-ticket holders because they're the ones who get rights to go to the games and form your foundation,” Mandell said. “But at 40 percent things don’t break even, so our project is to get in position to breakeven in the first non-COVID year. That's the best you can really shoot for as a young club. That'd be an incredible milestone.”

Teams like Hartford Athletic aren’t alone in taking a financial hit during the COVID-19 pandemic – those in Major League Soccer and the National Women’s Soccer League are as well – but the effect is more pronounced in the USL Championship. Just ask Mandell, who explained the reality they’re facing before 2021.

“We're not MLS, we don't have those kinds of deep pockets where they can absorb huge losses over years as they build their brand's value,” Mandell said. “But there's a committed group in the USL league office in supporting the league owners in their march to breakeven and hopefully make a few dollars that they can reinvest in the club and community.”

To reach that point, Hartford Athletic can take solace in what it achieved during the 2020 season. After finishing second-to-last during their expansion season a year ago, the Blue and Green topped Group F and booked a home playoff game. They lost their Eastern Conference quarterfinal Oct. 10 against Saint Louis FC, ending a mad dash of 17 games across 86 days, but it was still a remarkable step forward.

Led by head coach Radhi Jaidi – the former World Cup center back has returned to Southampton FC after a one-year secondment, and Hartford is now searching for its third manager in as many years – they had a 11-3-2 record. Midfielder and club captain Danny Barrera’s seven assists were among the league’s top five in that category, on-loan goalkeeper Parfait Mandanda provided an upgrade, and Ever Guzman and Alex Dixon combined for 11 goals at striker.

Those four players were the veterans on an otherwise-young team – the reliance on youth fit Jaidi’s background as former Southampton U-23 boss – that found success in a 3-5-2 formation. Some roster turnover is inevitable, but Mandell expects next year’s team to remain on the younger side.

“That's the key,” Mandell said. “Some clubs look to make a splash in one year or bring in a couple of high-bid players to get over a hurdle. That's not our model. Our model is really to build the infrastructure, the staff, the identity to do it year in and year out.

“Everyone involved, that's what they can expect. It's that consistent focus, and we feel like 2020 was an important stepping stone towards it. We have a lot to grow on the business side and on the field, but we're up for that challenge.”

As that approach further takes root, Mandell expects the USL Championship’s regional model to continue. May 2021 has been discussed as a potential start date, though it’s an incredibly fluid situation as the COVID-19 pandemic continues to run rampant in most states.

Those realities could impose further limitations, but Mandell feels a new bar has been set. They’re expected to make the playoffs and go one step further.

“Our goal in ‘21 is to win a home playoff game, simple as that,” Mandell said. “This year was hashtag #PlayoffBound. Next year, I don't know what the hashtag will be, but you have to give the guys a target to play for and grow, because when they're young players. If you go back to our first few games and then playoffs, it's almost like an entirely different team. That takes a lot of work.”

The entire landscape leaves Mandell hopeful for the future, but knowing the COVID-19 pandemic will likely dictate the club’s future, both from a business perspective and with the in-stadium experience. Those portions are largely out of Hartford Athletic’s control, so they’re left relishing 2020’s progress in spite of numerous challenges. There’s also how, according to Mandell, none of Hartford’s players or staff tested positive for COVID-19.

“Given everything this season threw at us, we're really proud of it and now we're marching forward,” Mandell said. “We're already into year three, focused there and beyond.”