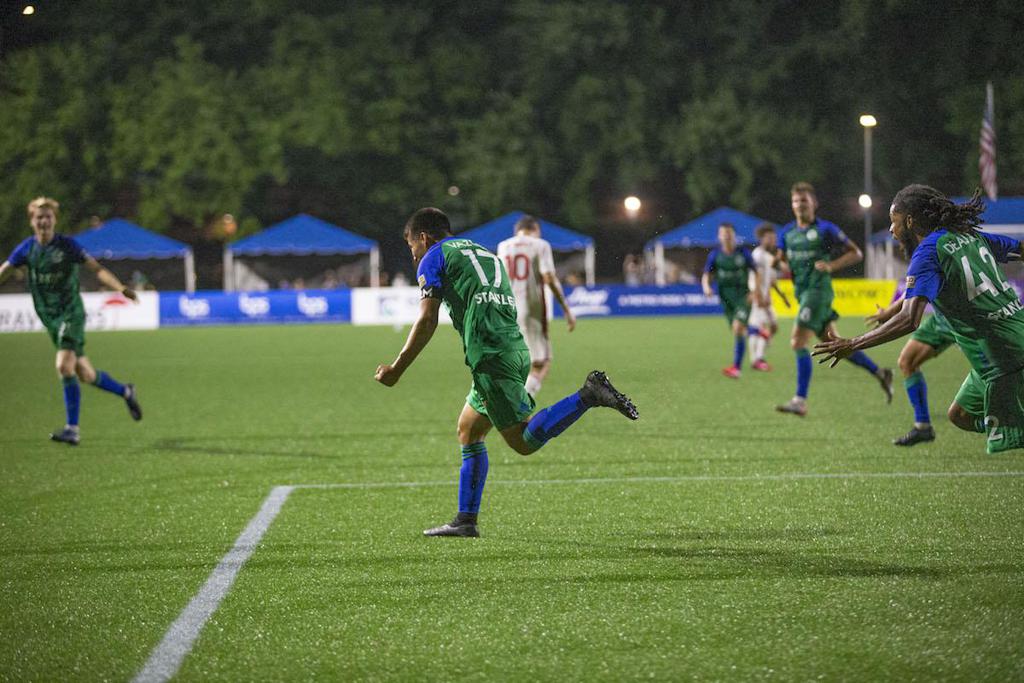 1) Let's start in the obvious spot. A couple of nights ago you scored your first professional goal. What was that moment like for you?

AV: That was an amazing moment. It was unreal to me. I'm glad I scored my first professional goal and I’m glad we took home the W.

2) Where does that rank among the best schools you've ever scored?

AV: I don't really remember all my goals. I think that was one of the best moments I've ever had scoring a goal. I feel like that topped a lot of things.

3) When you say that's one of the best moments you felt, what was the first thing you felt when you saw the ball hit off the crossbar and go into the net?

AV: I felt like for a second there I was dreaming! And then I'm like, “Oh this is real.” It just happened so fast, I went to go celebrate and it just felt so amazing.

4) What was your favorite message you got from friends or family after you scored?

AV: Everybody was just telling me that they're very happy for me and that I motivate kids and everything. That right there just motivates me, people following and supporting me and the team. It feels good to motivate young kids to be able to follow their dreams.

5) You made the club through open tryouts. Can you take me through that first day of open tryouts and kind of describe what the process was like for you?

AV: So, the first day of open tryouts, my parents took me and I wasn't really expecting much. I was already working on going to college and I just wanted to see where I was at and my level of soccer. So I went there and then it turned out to be a good day.

6) You were obviously still in high school at that time. What did your friends think of it?

AV: My friends, they’d always tell me that I'm going to make it far and they always gave me the support I needed. I honestly think that helped me a lot as well.

7) What is your pregame routine?

AV: Wake up, eat breakfast, get in the shower before the game just to cool off and feel ready. Head over to the stadium and change everything in my mind. Everything goes to that game and that’s it.

AV: It’s gotta be tacos. Tacos al Pastor are my favorite. My parents make them, but mostly we go to my uncle's restaurant. He has a restaurant down over where my family lives and we just go there and get tacos.

9) This year, you've signed a pro soccer contract, you've turned 18, and you graduated high school, all in the span of about four months. Can you rank those three moments in terms of importance to you?

AV: Graduating is really important. My family, they were always on me to make sure I finish school and I think it's a big accomplishment to be graduating. Signing the contract, that's also huge for us, because ever since I was little, my parents took me to practices, they told me to keep working hard at soccer and during Middle School and High School, they told me that I could actually be a professional and to believe in myself and never give up. It’s because of them that I have such a positive mindset.

AV: They gave me a huge amount of support. That's literally what motivated me most of the time, just to be able to make them happy and for them to be able to feel comfortable.

11) How did you guys celebrate when you signed your contract?

AV: We went back home and we just had a cookout outside in the backyard and they were just very happy, but sad as well because I was going to be leaving and living over here.

12) What has it been like living away from your parents for the first time?

AV: I feel like it's been good, the first week or two, I didn't feel really comfortable, but I started adapting to it and I feel comfortable now.

13) Are you cooking your own meals?

AV: Yeah, I cook and then sometimes, my mom makes me food before I leave when I’m home on the weekends.

14) What do you like to do when you're not playing soccer?

AV: I like to work out and stay fit. I play video games, mostly Call of Duty, and go back home with my family,

15) Who is your favorite soccer club?

AV: Real Madrid. I think I was 9 or so when I became a fan. My brother brought me into watching soccer on TV and he was watching them and then I just started watching with him all the time and just became a Madrid from there.

16) Well that brings me to my next question, Messi or Ronaldo?

AV: I can't really choose between the two because they're just both number one, but if I were to choose I’d say Ronaldo. I can't really explain it, he’s just a beast. I really like how Messi plays, like his style of play, but I’d choose Ronaldo.

17) You go directly from high school to being coached by somebody who's coached and played at some of the highest levels in soccer. What has that been like for you?

AV: It's been amazing, I've been learning so much since day one with him. He pushes me to the limit, and I feel like that's very good to be able to also push myself and try my hardest every day.

19) Can you give an example of something you've learned from Coach that's really improved your game?

AV: I'd say communicating more on the field. It was challenging at first but I think I'm starting to get used to it and I've been doing it a lot now. It helped the other night when I scored, I actually screamed for Dre (Deas) to cross it because I was open, and the pass came out well and I scored.

20) What advice do you have for kids throughout Connecticut and throughout the country who are trying to do exactly what you did and earn a professional contract?

Read More In This Series