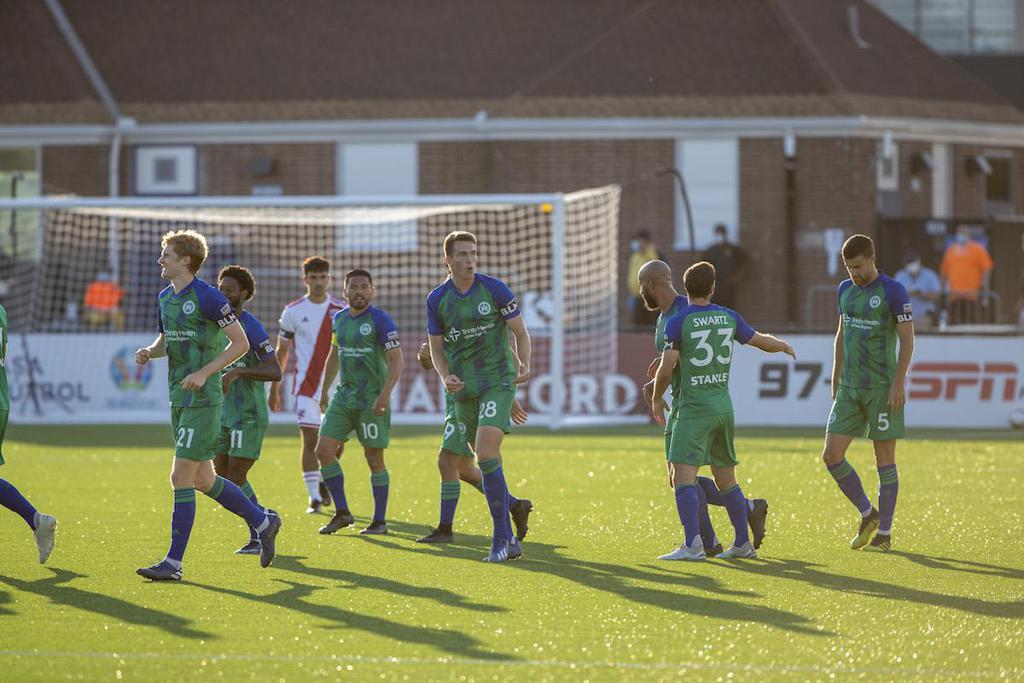 A hot day in Hartford transpired onto the pitch as Hartford Athletic took down divisional rivals Loudon United FC three goals to one!

The Boys in Green didn't take long to get going as they forced Loudon back and won an early corner. Gabi Tores swung in an inviting ball that met the head of Kevin Politz who headed in! Politz, who was born in Connecticut, scored the second fastest goal in Hartford Athletic history.

Hartford continued to pile on the pressure throughout the first half. Loudon had some chances and Parfait Mandanda was forced to come off of his line twice. Hartford kept the ball for long spells and found a hole in the Loudon defense. Danny Barrera played a deadly flicked ball between two defenders, it found the right foot of Harry Swartz who poked the ball into the side netting!

Hartford made two changes in the second half, Arthur Rogers and Tyreke Johnson came on for Ever Guzmán and Nicky Downs. The fresh and speedy legs of Johnson proved to be potent as Johnson found space in the 55th minute. Tyreke put the Loudon United defender in a spin cycle with multiple step overs and then curled the ball into the corner to make it 3-0. Loudon then quickly applied pressure so much so that it resulted in them winning a penalty. Elvis Amoh was tripped up in the 18 by Alex Davey and thereafter dispatched a penalty past Parfait Mandanda into the roof of the net

Late on in the game, Tyreke Johnson showed great footwork to beat three defenders and force a great save from the Loudon keeper. Hartford Athletic win back to back games for the second time in club history! Athletic improves to 2-0 in the division.

The Boys in Green are back in action on Saturday when they host fellow Group F member Philadelphia Union II at 7 PM. You can catch the game on WCTX or stream on hartfordathletic.com/watch.