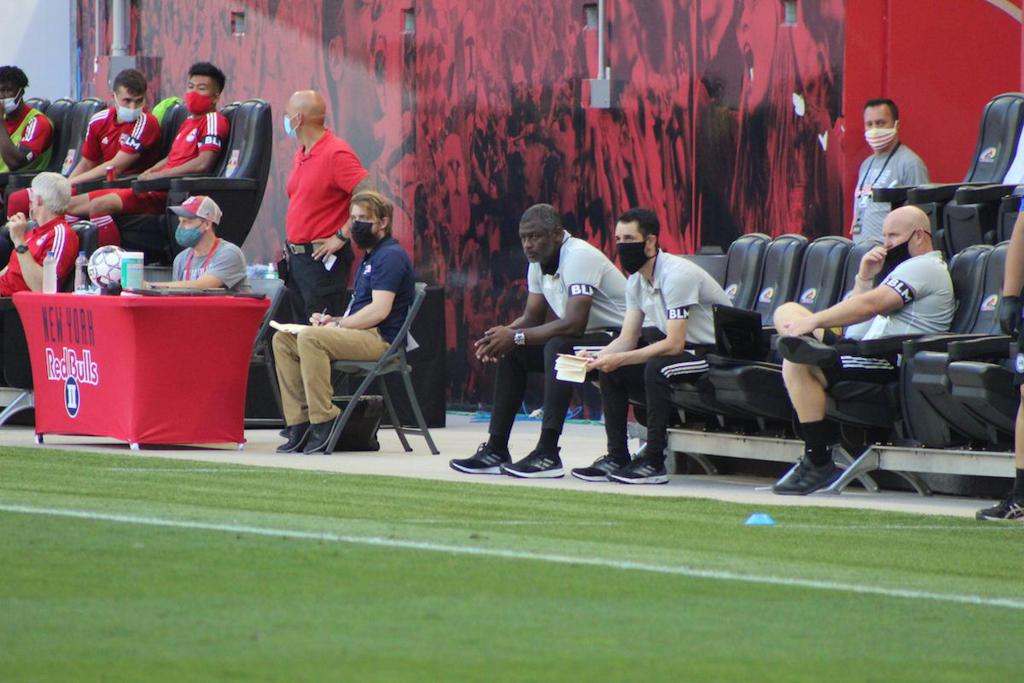 Radhi Jaïdi's debut as Hartford Athletic Head Coach was supposed to come 4 months ago. Safe to say tonight's result was worth the wait as Hartford returns home with 3 points and a 1-0 victory over New York Red Bulls II.

Despite a Starting XI that included 5 returning players from the 2019 season, it was the new guys who stole the spotlight in the first half, specifically Goalkeeper Parfait Mandanda. Mandanda stepped up to turn away a number of RBII opportunities in the first half but the one for the highlight reel came off of his boot. In the 12th minute, Mandanda ran up to make a catch on an RBII corner. After snatching the ball out of the air, he immediately punted the ball deep to a streaking Cheno Guzmán. RBII keeper Wallis Lapsley misplayed the big bounce and Cheno blew right past him to collect the ball and put it into an open net for an early 1-0 lead.

Despite being out possessed in the second half, the Hartford midfield and defense was able to keep the RBII offense at bay for most of the final 45. A couple of early chances for New York just couldn't find the frame. This would prove to be a theme for the evening. Jaïdi went to his bench to keep the lineup fresh, using 4 of the 5 substitutions now allowed per new USL Championship rules. With 7 minutes of stoppage time awarded, RBII started to find an offensive rhythm and put a couple of balls in the box. With seconds to go, RBII had their best chance to level the score. Deri Corfe collected a cross inside the box, curled it for the far post, but found the woodwork. The rebound was collected just outside the box by RBII but Toure's left-footed volley attempt missed wide. The final whistle blew and Hartford escaped with a 1-0 victory.

The Boys in Green move into a tie with Pittsburgh at the top of the Group F standings with 3 points a piece. Athletic will return home with short turnaround time, opening Dillon Stadium for the 2020 season on Monday night at 7 PM against Loudoun United FC. The match will be nationally televised on ESPN2.