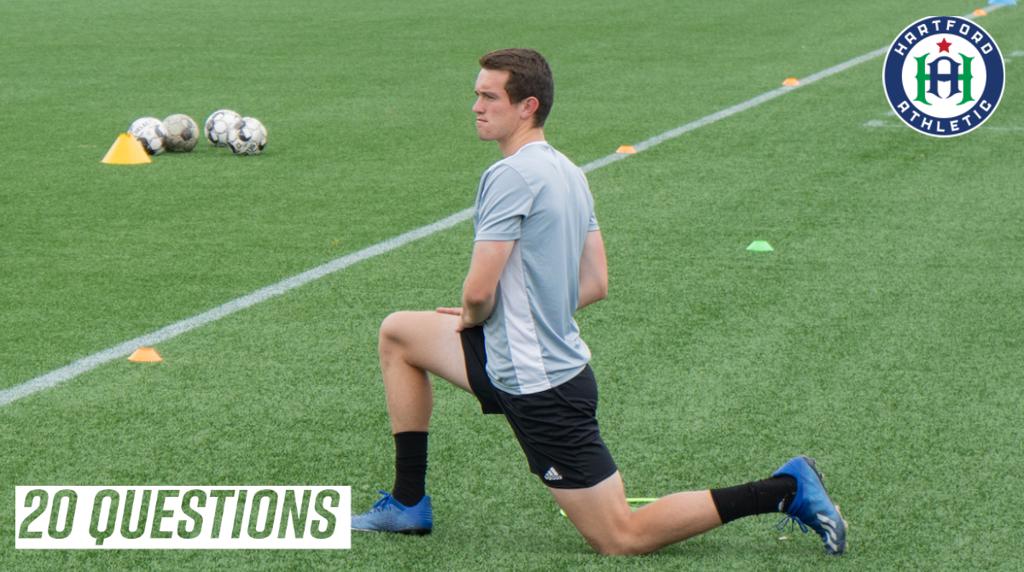 Welcome back to 20 Questions: the series where we help you better get to know the players on this year's squad. For previous interviews in this series, we went behind the scenes with Arthur Rogers,  Danny Barrera, Mads Jørgensen, Alex Davey, Noah Paravicini, Aiden Mesias, Mac Steeves, Kevin Politz, Gabriel Torres, Cheno, Harry Swartz and Alex Dixon. This week, we caught up with rookie Conor McGlynn to talk about his path to Hartford, why he chose the number 28, and breakfast foods. Enjoy!

1) For those who don't know, you made the club through open tryouts back in December. What was your pursuit of a professional career like before you came to tryouts?

CM: I tried to go the college route and get drafted, but that didn't work out, so I planned on getting trials with different clubs. The first one I went to was Hartford’s open tryouts and I just wanted to see how that would go to feel out the waters. It turned out I did well and I progressed from there to the invitational tryout and then from there to preseason.

2) Did you have plans to visit any other teams?

CM: I had planned to go down to Tampa Bay two weeks after that but I was pretty comfortable in Hartford. I felt pretty welcome there and Coach Jaïdi talked to me after saying he wanted me back for the Invitational trial so I didn't want to risk anything.

CM: It was great. There were a lot of talented players. I was definitely nervous, I didn't get to play for the first hour because there were so many people. It was a great turnout and the level of play was pretty high, so I was definitely nervous at first. But once I got on the field I sort of eased into it and tried to show what I had to the coaching staff and thankfully they saw something in me.

4) Did you have any moments where you thought, ‘Oh, this is going pretty well for me, I might have a real shot here’?

CM: Yeah, in one of the small sided games I chipped the goalie from like 35 yards out and Coach Jaïdi saw, and that's when they really started watching our game which was great. Then I just kind of performed how I normally performed, I got confidence from that and it carried over into the 11 v 11 game where I scored another goal.

5) What did it feel like when you moved on to the invitational tryout and the competition got a little bit stronger?

CM: Going into it I was definitely nervous because all these guys were invited from the top colleges around the country. But I just kept the same mindset that I had to try and be the best player that I can be, and the best person that I can be on and off the field. I just gave my all and I was pretty confident with the performance that I put in over the course of the three day trial.

6) What did it feel like when you finally got your contract?

CM: I cried. I honestly cried. When you've been working for something for so long and you finally achieve it, all those emotions just kind of came up. For myself, for my family, it meant the world to play in a place like Hartford. I never thought something like this would happen. When you work basically your entire life or something and it comes to fruition, it was definitely a special moment for my family and I.

7) What song do you have stuck in your head right now?

CM: Harry (Swartz) and I were singing in the car on the way here. I think it’s called 10 feet tall, by Afrojack. We were singing the high notes from it, it's pretty funny.

8) If you could see any musician live, who would it be?

9) What’s your favorite style of music?

CM: I'd say my favorite type of music is EDM. My favorite artists are David Guetta, Tiesto, Avicii, those type of guys, I've gone to a bunch of concerts like that, they were pretty awesome.

10) Your brother signed with Philadelphia Union II just about the same time you signed here. What was that like for your family?

CM: It was great. Our parents, they worked their entire lives to just put us in the best position to achieve our dreams and in this case they succeeded and I'll be forever grateful for that. For me especially, just training with him practically every day it was definitely an emotional day for me to see him achieve his goal and achieve his dream of playing for Philadelphia.

11) Are the two of you competitive?

CM: Oh, absolutely. In anything that we do, whether that be one v ones in training or even something as simple as playing FIFA after a training session, we’re always competing. We're pretty competitive but I think that competitive nature made us better both on and off the field and just made us better people.

CM: Oh, me, of course. As the older brother, that’s how it should be. He's five years younger than me so I want him to learn from me and I want to be a good example. But he's my younger brother, I gotta push him around a little bit.

CM: Messi. I just think he has a natural talent and he does some things that no one in the world could do with a football. I admire Ronaldo and his work ethic, but I just feel like what Messi’s been able to accomplish over the course of his career is just surreal. I've never seen a talent like that. I hope we do again in the future, but in today's world there's no one on the planet that could play like him.

14) What's the best sporting event you've ever been to as a fan?

CM: In 2016, the year that Leicester won the title, I went to Anfield in England to watch Liverpool against Leicester and Liverpool ended up winning the game. The atmosphere in the stadium was electric, especially when the Liverpool fans sang “You'll never walk alone.” It's different watching on TV, but actually going to a game in England, the atmosphere was unbelievable.

15) What differences have you noticed between college and the pros?

CM: I'd probably say, just the overall professionalism, on and off the field. In college, we didn't really emphasize how important our health is off the field. We didn't really do much nutrition stuff, and things of that nature. Here at Hartford, the levels are much higher. We even have the vests that have the GPS tracking. That's a huge step in the right direction to see our workload. We never had that at Sienna.

CM: I chose the number 28 because of my grandma. She was born on February 28th. She means world to me. She's always been very supportive of whatever path I was gonna take. She lives pretty close to me in Queens and she’s just always there for support.

CM: I don't want to say a car, and be totally typical. I'd probably buy a house in Hawaii. I've always wanted to live there. I'd try to be smart and invest in real estate. I probably wouldn't go spend it on like cars and all these other things.

18) Rank these from best to worst: pancakes, waffles, french toast.

CM: Pancakes are the best, then french toast, then waffles. I've always just been a pancake person ever since I was growing up, I always just had pancakes. Once in a blue moon my mom would make french toast and it was usually pretty good. I never got into waffles, I never go and order a waffle, so it’s third.

19) What are your long term career goals in soccer?

CM: The way I look at it is I'm amazed that I'm here, so I first want to try and help this team in any way that I can for as long as I can. I'm still young and I want to be optimistic, so an opportunity in the MLS would be surreal, but as for now, I want to to do the best that I can here in Hartford.

20) What advice do you have for somebody who was in your shoes a year ago, heading into their senior year, and looking to embark on their professional career?

CM: Take any opportunity that you can. I ended up just going to an open tryout and now I'm playing for a professional team in Hartford and I've loved it ever since. Whatever opportunity that you have, you have to take it because you never know where that door is gonna lead or if it opens other doors.

Read More In The Series