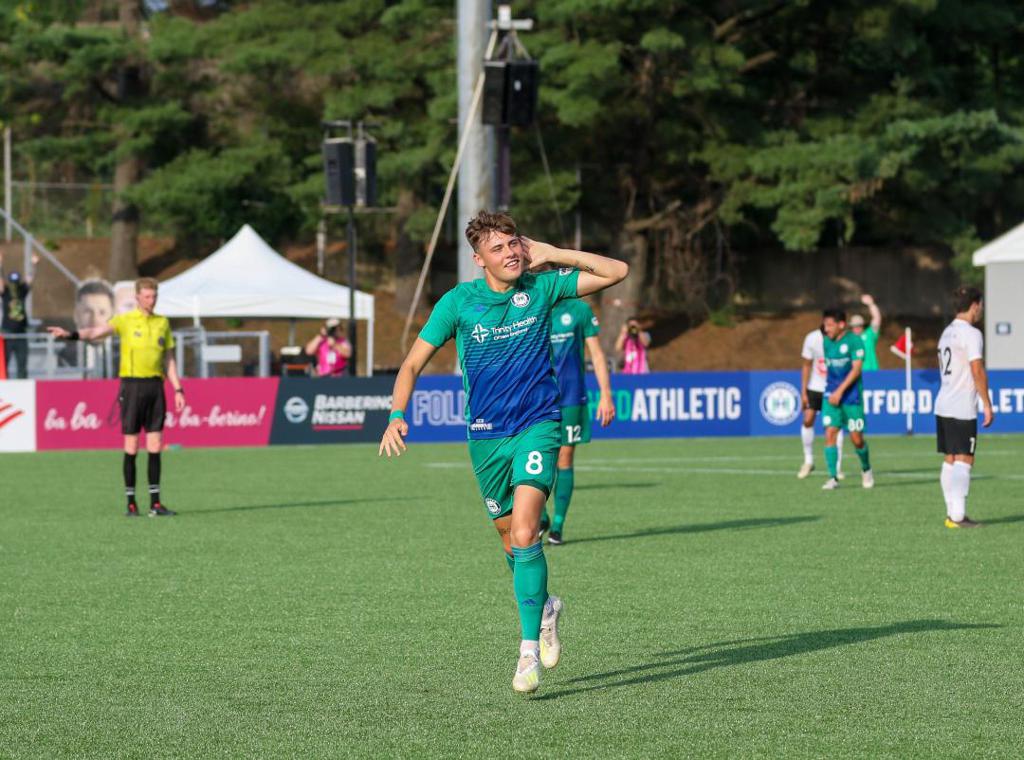 Welcome back to 20 Questions: the series where we help you better get to know the players on this year's squad. For previous interviews in this series, we went behind the scenes with Alex Davey, Noah Paravicini, Aiden Mesias, Mac Steeves, Kevin Politz, Gabriel Torres, Cheno, Harry Swartz and Alex Dixon. In this edition, we caught up with Mads Jørgensen, who is back for his second season in Green and Blue. Enjoy!

1) Last year, you were 20 years old, coming to America to play professional soccer. What were you thinking on the plane over here?

MJ: I was obviously very nervous about what was going to happen when I came over here. Things like how the other guys think about me, being the youngest guy on the team, coming from Denmark, didn't know the language hundred percent. I mean, I could speak it, but not completely at that point, so I was definitely nervous but excited. And I just wanted to show the best side of myself.

2) Why did you decide to come play in America?

MJ: I felt a little overlooked back home. I didn't feel like I got my opportunity. I went through a bad knee injury, and I had some opportunities for some clubs before my knee injury, but after, they wanted to wait a little bit to see how I would play when I came back. I felt like I didn't have time to wait, I'm really impatient about my own career, and I want to move forward as quickly as possible. So I just wanted to take a step forward in my professional career, learn lots of stuff over here, but also personally, to move out by myself to a new country, new culture, that was something that played a big role for me.

3) How hard was it transitioning to the American way of life?

MJ: I mean the life, it's not that much different when you are in the soccer environment. Back home I had the same schedule during the day: wake up, have some breakfast, get myself ready for practice, go to practice, go home, relax, read some books, get myself ready for the next day. So in the soccer environment it was not really that different. But outside of soccer, it’s obviously very different because everything is so much bigger over here. Everything is new, and I had to get used to a lot of new things I hadn't seen before. And I wanted to see everything because I'm curious as a person.

4) What was the strangest thing for you?

MJ: Americans in general, they love cheese to a point that is crazy. It's really crazy. I feel like they put cheese on everything. I've seen cheese chocolate and that is so weird to me.

5) What would you say is the biggest difference in the way of life between here and Denmark?

MJ: In Denmark I feel like everyone has a connection. If you meet someone, they always know someone you already know, because the population in Denmark is not large. And I know this sounds strange but that’s just how it feels. And over here everything is so big and it's something you have to get used to.  Also, the people over here are so friendly, so welcoming. I feel like Danish people are a little bit more arrogant and people over here are a bit more welcoming and warm. And I've really felt that.

7) What piece of advice would you give to someone who is young and coming to play in America for the first time?

MJ: Focus on soccer first and when you have time or days off you can go to the mall, you can go to the city and enjoy the city. I wanted to see everything so quickly when I came at first, that I probably didn’t enjoy it as much. So just relax, focus on your soccer, that's why you're here. I focused on soccer, but I just wanted to do everything because I always want to be doing something.

MJ: Ronaldo, because I like his mentality. He's never satisfied with himself, even though he had won the Ballon d'Or so many times, he's always trying to reach for even more, which is something I adore so much and I think it's amazing the way he's building his life. He came from nothing and look where he is now, it's unreal.

8) You've gotten a number of tattoos since you came here to America. Which are your favorites and what can you tell us about them?

MJ: Okay, so I have a frame on my upper arm. It's based on a picture of my mom and I. That's something that means everything to me. Every time I look at it I just feel heaviness because my mom and my dad and my family in general, they’re my whole world and I just love them. If I have to pick another one, I have an hourglass with a soccer ball on the inside of my arm. It keeps me motivated because you can’t play soccer forever, so you’ve got to enjoy it while you can. You’ve gotta appreciate the time you have with soccer when you have the job of being a soccer player, because that's what you love. So I picked those two out, because I think those are the ones that mean the most to me.

9) What are your long term goals in soccer?

10) How would you say that Coach Jaïdi has helped you in your pursuit of that goal?

MJ: I’ve had a lot of one-on-one conversations with Coach, and he has definitely made me realize that it doesn't come that easy, that it takes hard work. I have always been a guy where things come easy to me, and I realized that nothing actually comes easy. You've got to put the effort in and you've got to work hard and I feel better than ever before. I can already see and feel a difference in my body. I've started a vegetarian diet, which is something that’s helped me a lot. I feel way lighter, I feel way more fresh in the mornings when I wake up. Plus, I built a schedule for myself during this quarantine period. I followed it every single day just to make myself stay busy. I woke up at eight, went for a walk, made a cup of coffee, had the online team workout, relax for a little bit, then did the running we had to do, relax a little bit more, and then I would do some physical strength training in our living room in the afternoon. And then I would eat some dinner and relax for the rest of the day. So that was how my life, or my days were in quarantine. My younger self would never have done that, it would have been more PlayStation, been more lazy, but I have definitely changed my whole mindset.

11) What is your favorite animal?

MJ: It's got to be a dog. Because I feel like you get so close to a dog, and it's like your best friend. It will do everything for you and you actually build up a special friendship with the dog, and it's something that I find so interesting and so sweet. The way they act around you, they give you a good feel they love you.

12) Have you thought about getting a dog?

MJ: 100% I have. But the thing is, If I want to have a dog, I want to be able to hundred percent take care of it and raise it and make sure everything is perfect for the dog. But when we're traveling in season, I couldn't do that to the dog and just go to Florida for example or somewhere else and just leave the dog behind. I couldn't do that it would be too hard.

13) Have you ever cried during a movie or tv show?

MJ: No, but I feel like some tears might have come in slowly but I've never cried.

14) What show was it that made you feel emotional?

MJ: It’s gonna be so embarrassing when I say this. It's Gossip Girl. There was something going on with the relationship between two of the people in the show and I just felt like it was so sad.

15) I would think, most fans would say, free kicks are your specialty. How did you get so good at them?

MJ: It all started when I was 15 back home and I signed my first contract and I moved to the Academy. We had morning practice every single Monday, Wednesday, and Thursday from 7am to 9am, and the last half of those practice sessions we could do whatever we wanted to do, as long as we kept it professional and kept it serious. So what I did was, I put up a wall, and I brought 20 balls, and I just practiced different ways to shoot the ball. I found out that the way that I shoot now is the term you call a knuckleball, and I found out that I could do that. I wouldn't say that I can do it to perfection now, but I can do it almost every time.

16) Do you have any tips for anyone who wants to be as good as you are at free kicks?

MJ: I don't think there's any magic behind it other than practice, practice, practice. I've spent so many hours practicing my free kick skills, and the only way to get better is by practicing it. What I would say though, my parents have always been a big help. Behind our house, we had a big soccer goal where I would go out every single day and just practice my shooting skills, both left and right. My parents had to yell at me to come in and eat dinner and stuff like that.

17) What's the area of your game you are most trying to improve?

MJ: I’ll give you two things, I would say awareness, being better at reading the game around me and reading the opponents around me better. Also, my defending, not being lazy about my recovery runs, having a stronger mindset about winning the ball back. I think that's two main points I have to get stronger at for me to like get to the next level.

18) If you could play in any Stadium in the world what stadium would it be?

MJ: Santiago Bernabéu. Real Madrid is my club. I've been to the stadium and it's unreal. It's so big and pretty, I would love to play there. I’ve been a supporter of Real Madrid as long as I can remember honestly. My dad is a huge Madrid fan as well. I remember when I was a little kid, he went to Spain and watched a Real Madrid game and he came home with Madrid jersey for me and I was the happiest kid on Earth. It was a Ramos shirt around the time when he played right back.

19) Do you have a team from Denmark that you support as well?

MJ: I've always supported the club that I played in growing up, OB, Odense Boldklub. I still follow them, guys that play on the team now, I still talk with them. It's my club back home.

20) When you look back on your career, and hopefully it's a long long time from now, how do you want to be remembered?

Read More In This Series