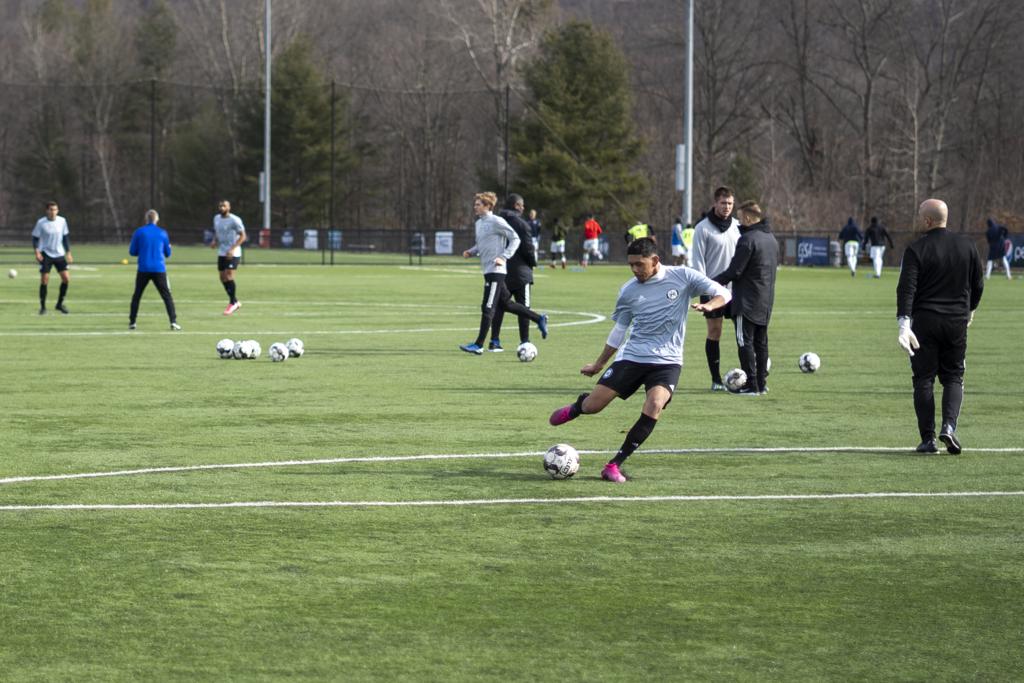 Welcome back to 20 Questions: the series where we help you better get to know the players on this year's squad. For previous interviews in this series, we went behind the scenes with Mac Steeves, Kevin Politz, Gabriel Torres, Cheno, Harry Swartz and Alex Dixon. In this edition, we caught up with new signing Aiden Mesias. Alright let's go:

AM: I grew up in Camden Town, Somers Town (London, England). It’s no secret that England is just football mad. Every day is about football in England.

I have a younger sister and her name spelled backwards is my name forwards. She’s not a footballer but she’s really into tennis. My dad’s Filipino but grew up in Germany (my grandparents still live there), and my mom is from an island near Australia but she grew up in Portugal so I’ve got a lot of nations represented. My parents met each other in England and the rest is history haha. We support Bayern Munich because of our German roots, and I also support Tottenham Hotspur just because they're somewhat of an underdog.

2. What was it like growing up playing football in England?

AM: I played what we call 'cage' growing up which is basically futsal on concrete or street soccer. I’d just meet up with my crew, and we’d play pick up any chance we got. Games were 7 minute long and 2 goals and you’re off. It got really rough and competitive but it was so much fun to challenge other kids whether you knew them or not.

3. How else did you train growing up?

AM: I spent so many hours with my dad, and my love for football and where I am today as a professional all started with my dad. He was a lower division player in Germany, and I’m very close with my dad and grateful for all the time he put in with me and the sacrifices he made.

4. When did the academy come into the picture?

AM: My dad was asking around at Sunday league clubs he knew to see who had the most contacts and found one coach who sent me on trial to Charlton Athletic. I was there from ages 9-12 and then got released. From there, my dad searched around again in his Sunday league and that’s how I ended up at Queens Park Rangers from ages 13-19. I moved out of my house when I was 16 to live in the digs with the other academy players.

AM: We still had schooling and got a degree (I have a degree in physical education) but outside of that we would just play football all day, every day which was exactly what I wanted to do haha. Monday, Tuesday, Thursday, and Friday we trained and Saturday we had a match. I really enjoyed it and am so thankful for the opportunity. I’m lucky to do what I love every day.

6. What did you learn from QPR outside of football?

AM: Leaving home at a young age and being independent was very tough but a big growth and learning experience for me that has helped me in my life and career. It has certainly helped make the transition to Hartford easy even though I had to move to a completely new place in a new country.

7. Did you know any of the guys on the squad before you got here?

AM: No but Arthur Rogers and I have a good mutual friend from Bournemouth so we got connected and ended up starting to talk before we both arrived in Hartford. Then we both found out we were going to be roommates so it’s just funny how small the world can be sometimes.

8. Is there anyone on the squad you’re closest with?

AM: Everyone is tight on the squad, and it’s a great group of guys. Arthur, Tyreke and I go on runs and hang out all the time. Davey, Arthur, and I also like to get on PS4 together -- I love to play FIFA and Call of Duty. Overall everyone gets along great.

9. What were your expectations coming to Hartford? What do you think of the fans so far?

AM: I knew it was a new club that struggled a bit last year on the pitch but thought this would be such a great opportunity to do something big. I trust Coach Radhi a lot to make a difference wherever he is and knew him from my time playing against him in the academy league since he was coaching Southampton. I don’t know if I had certain expectations other than that I was mad excited to get here and play for the fans. And speaking of the fans they’ve been incredible. The preseason game alone there were probably 50 fans in the afternoon on a workday that showed up, and they sounded like 1,000.

10. How did you end up here with Hartford Athletic?

AM: I wanted to come to play in America and my agent was looking at clubs and got in touch with Hartford. From there Coach Radhi got announced, and he knew me from my time at QPR and wanted me here in Hartford. It was just funny how it worked out.

11. Do you have any favorite home-cooked meals or food overall?

AM: Crispy chicken fajitas are my favorite. I’m still trying to find them here but when I do I’m buying a lot haha. If any fans out there have suggestions please let me know!

12. What’s your favorite moment as a footballer?

AM: It’s not a particular moment but what's most special to me is spending all those hours with my dad just learning the game from ages 3-16. He spent so much time and sacrificed so much for me. I’m so lucky, and I’m very close with my family. I Facetime my mom every day and check in with my dad and my sister.

13. What are your aspirations as a footballer?

AM: My short-term goal is to start my career with Hartford with a bang and help the club make history. From there I would love a chance at MLS and then eventually get back to Europe. Ever since I was a little kid I dreamed of being a professional footballer, and I can't wait to play here in Hartford.

14. What have you learned from Coach Jaïdi thus far?

AM: I obviously played against him in the past and you could tell from the outside looking in that he was special. But then playing for him now? You really get to see the level of dedication -- bordering on obsessiveness -- in football and in life. It's just so inspiring. A perfect example is that during this isolation period we are studying football and doing our runs and our workouts every day. When we come back we are going to be better than everyone because we are going to work harder than everyone. You can see why Coach Radhi got to such incredible heights in his own playing career. He’s one of the best coaches I’ve ever played for.

15. If you weren't a soccer player what would you be doing?

AM: I love working with and helping kids. I would still be involved in football haha. I would be coaching and trying my best to make their lives better.

AM: Ronaldo is an incredible footballer. Messi isn’t human.

17. Who was your favorite athlete as a kid? Do you follow any sports outside of soccer?

AM: Zinedine Zidane. I’m a midfielder, and I looked at him and he’s such a  great leader and just a pure masterclass at everything he does. I also follow the NBA – I don’t have a favorite team but my favorite player is Ja Morant.

18. What’s with the piano playing? Do you have a favorite musical artist?

AM: I got the keyboard a month ago and have just been teaching myself for fun. I had a goal when I got to America to learn to cook and play an instrument in addition to my footballing. My favorite artist currently is 6lack.

AM: My favorite TV shows are Game of Thrones and Friends. Right now I’m watching Peaky Blinders -- it’s funny that I actually need to watch Peaky with subtitles to understand it despite being from England! My favorite movie is Fast Five – I know there are a million Fast and Furious movies but it’s specifically the fifth one for me haha. I love movies – I would go to the movie theater once a week before everything got shut down.

AM: I share the same birthday with two of my idols: Pelé and Daenerys Targaryen (aka Emilia Clarke).