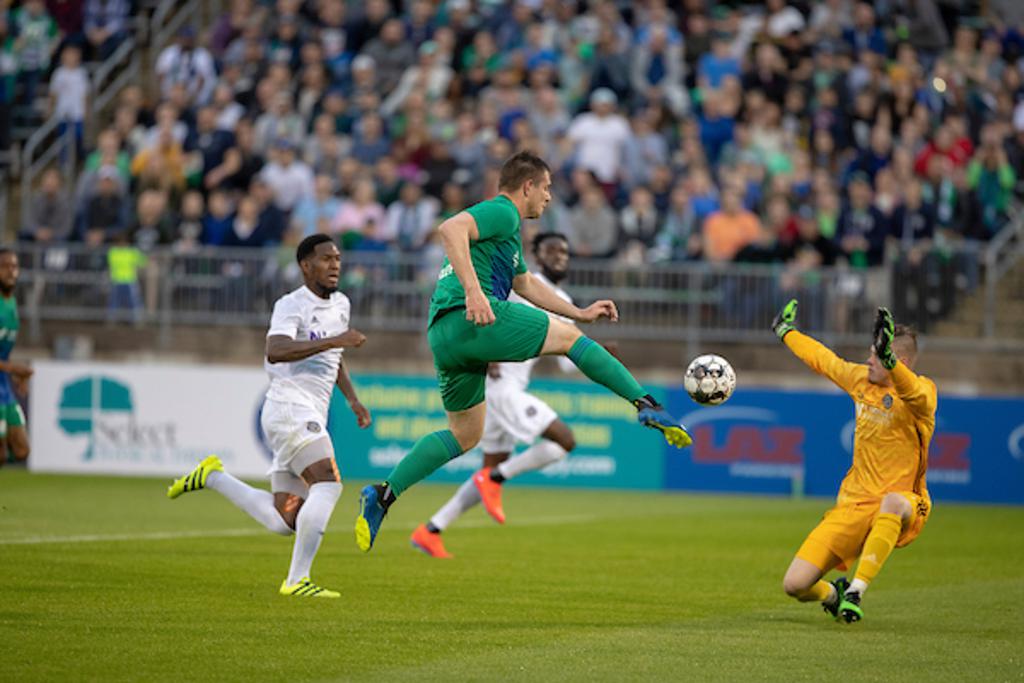 Welcome back to 20 Questions! Our goal is to help you better get to know the players on this year's squad. For previous interviews in this series, we went behind the scenes with Kevin Politz, Gabriel Torres, Cheno, Harry Swartz and Alex Dixon. In this edition, we caught up with Mac Steeves. Enjoy!

1. Let’s start by having you tell us a little bit about yourself. Where are you from?

MS: I grew up in Needham, Massachusetts which is about 15-20 minutes south of Boston. Harry Swartz and I actually went to high school together, and we grew up playing for the Boston Bolts which is our local club team.

2. So you knew Harry pretty well even before playing together the past two seasons?

MS: Yeah I’ve known Harry since I was five years old. Our dads actually played high soccer together and then adult league so our families would get together pretty much every Sunday growing up and Harry and I would play soccer, golf, wiffle ball, touch football, you name it.

3. Can you tell us a little bit about your family?

MS: I have two sisters (one older and one younger so I’m the middle child). My younger sister actually went to Providence with me and was on the women’s soccer team when I was on the men’s team. Right now I have a dog we adopted last year and two cats – one of which was a rescue.

4. Do you have any favorite home-cooked meals or food overall?

5. What went into your decision to go vegetarian?

MS: I’ve unfortunately had quite a few injuries so I did some research and watched documentaries like The Game Changers and saw that there might be some health benefits to going to a plant-based diet. At the end of last season, Danny Barrera and I did a 10-day vegetarian challenge to see if we could do it. Danny stuck with it for a while but he has meat every once in a while (I’d call him a flexitarian). I pretty much stick to it as much as I can and have been a vegetarian since last October. I feel a lot better – lighter, more energy, better sleep, and not eating as much. I’ve also noticed a big difference in my muscle recovery after training – my body recovers a lot quicker. This preseason I played 90 minutes and the next day I felt like I could go again. Obviously that’s a credit to the coaching staff getting us really fit but also I think it has something to do with how I’m fueling my body. As far as other guys on the team Nicky Downs, Mads Jørgensen, and myself are vegetarian, Kevin Politz is vegan, and Danny is a flexitarian – I’m sure there are a few others considering it or mostly doing it. Actually Coach Jaïdi also just started a vegetarian diet since this current isolation period started after a few discussions with some of the guys.

6. What’s your favorite moment as a player?

MS: Being drafted out of college to MLS was an amazing moment for me. I didn’t know if I was gonna be drafted, so I was just sitting at home. The next thing I knew my name got called and my phone rang and it was the head coach of Houston Dynamo.

On the field, one of my favorite moments was making my debut in Houston. Coincidentally enough my mom and sister had a flight booked a month in advance without knowing it was going to be my debut. It was really special that they got to be there to see me play that day.

And then of course last season scoring my first professional goal to bring our first home match level on May 4th was incredible.

7. That was a great day and will forever be one of our best memories as a Club. What was it like scoring that first goal? What was the atmosphere like that day? Was it what the squad expected coming into that game?

MS: There was a lot of hype going into that match since our first eight games were on the road. We had obviously struggled to that point and were disappointed with the results, but we couldn’t wait to play in front of the home fans. We didn’t really know what to expect going into the game but we did keep hearing a lot of rumors that there was going to be a big crowd. Then we stepped out onto the pitch in front of over 11,000 fans, and it was just absolutely incredible. It was the best atmosphere I’ve ever played in, and we got our first result of the season, which was huge. The fans made an impact that day.

In terms of the goal I scored, a few days later I took time to reflect on it because I had a major surgery on both hips less than a year before that. On a personal level it was big for me because it showed that I could still play at this level. From a team perspective, we were down 1-0 at home so to get an equalizer minutes after we went down was huge. I was just happy that I could help the team and give the fans something to cheer about. The whole day was really special. There was a ton of excitement and emotion, and I had my family, college roommates, and friends from home all there in attendance.

8. Turning the page to this season, what have you learned from Coach Jaïdi thus far?

MS: Coach Jaïdi is really good at getting the most out of everyone on and off the field. He does a great job with film, and it makes you think and see the game in a completely different way than you've seen it before. He’s also a strong communicator – he diagrams what we need to do and then applies it in training after you see it on the board. These are all things I’ve done before with other coaches, but the way he puts it all together and actually applies it in training is something I’ve never experienced this way before. The preparation will make us a really tough team to play against because everyone on the field is on the same page with what we need to do and how we need to move together.

9. If you weren't a pro soccer player what would you be doing?

MS: Ronaldo. I like them both. I’m not saying he’s better or worse than Messi – I’ve always just been a fan since he played for Manchester United. I’m all about appreciating them while we have them versus getting into debates about who’s better. I feel the same way about Michael Jordan and LeBron James.

11. Who's your favorite athlete?

MS: Lebron James is my favorite of all time. In terms of soccer players, growing up I really liked Ronaldinho and Thierry Henry.

12. What’s your favorite sport to follow outside of soccer?

14. If an actor were to play you in a movie who would it be?

MS: Tottenham Hotspur. My mom was a big Spurs fan – she studied abroad in London in college and followed them when she was there – and I kind of just followed her.

16. What's your favorite TV show? What are you watching currently?

MS: I used to play Fortnite quite a bit – more than I’d like to admit haha – but I haven’t played in months.

19. Did you play any instruments growing up?

MS: No but I’ve been thinking of getting a keyboard to learn to play the piano. Growing up I was all sports but I wish I had picked up an instrument. In Houston my roommate taught himself how to play piano and guitar in the same year.

20. What's one piece of advice you'd give to younger players?

MS: Don’t give up on your dreams just keep going. It’s not always how quickly you finish the race but that you finish it at all.