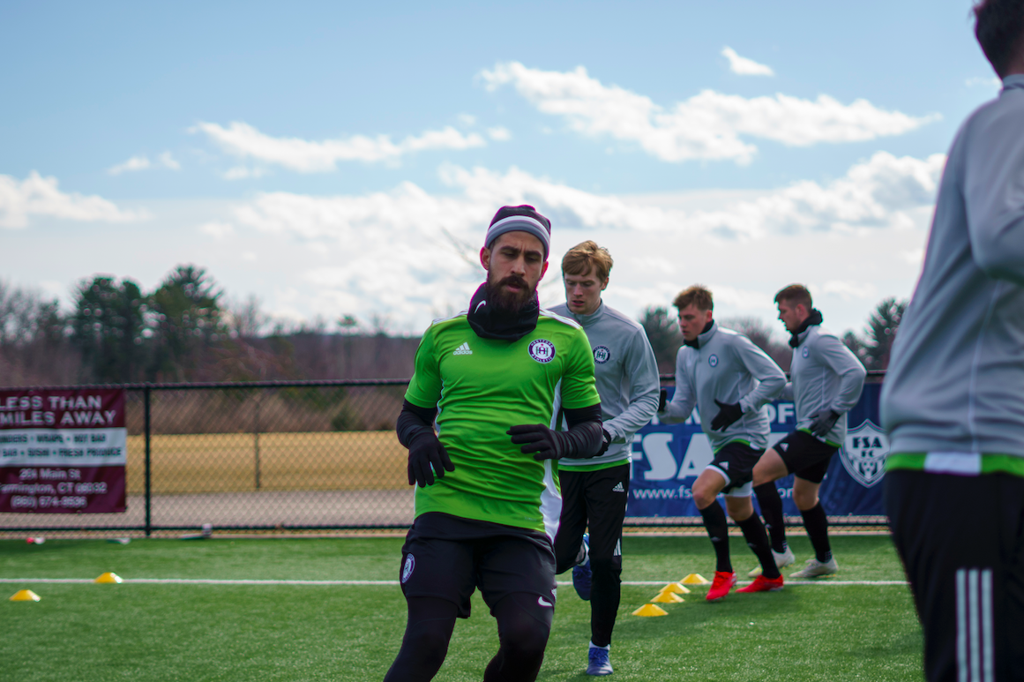 Welcome back to our 20 Questions series! Our goal is to help you better get to know the players you see on the pitch week in and week out. For the first two interviews in our series, we went behind the scenes with Harry Swartz and Alex Dixon. In this edition, we caught up with Ever "Cheno" Guzmán who is new to the Club in 2020. Enjoy!

1. How are you feeling about the squad this year?

EG: I’m very excited to be in Hartford and to be playing another year of professional soccer. I’m very grateful to the owners and Coach Jaïdi for the opportunity. It means so much to me to do what I love, and I’m working my hardest to do my best for my teammates and the fans. It's been difficult with the current [COVID-19] situation. But, we’ve been working together in preseason for 8 weeks, and when soccer comes back we're going to be prepared and very strong. The challenge now is to keep a positive mindset and try our best to provide some positivity for our fans.

2. So, you're a goal-scorer. You are San Antonio FC's all-time leading scorer, and we can't wait to see you score for the first time in the green and blue. What does it feel like when you score?

EG: It’s simple: it's happiness for me and my family, but it's not about me. It’s about the team and doing well for my teammates.

3. You bagged four goals in a match earlier this preseason -- what is that like? Are you just locked in?

EG: I try to stay in my routine and stay even, but of course a game like that is so much fun. You feel like you’ve been working on everything your coach told you in training and it's paying off, and you're also happy that you’re helping your team. In this case, it was just a friendly, so we have to keep working hard and hopefully the goals continue come.

4. While we're on the topic, what's your favorite goal celebration?

EG: I think I need to work on that – honestly it’s whatever I feel in the moment.

EG: If I have to choose one it’s Messi. He plays so simple and makes it seem so easy. It’s such a joy to watch him play -- he’s just different. That doesn’t mean I don’t like Ronaldo though -- they’re the best two players in the world.

6. What have you learned over your career that you want to share with young players or a younger version of yourself?

EG: You always have to have a "next ball" mindset and have to be working hard for that next ball. Whether you score, or you fail, you have to learn from it, work harder, and move to the next.

7. Ok the question we've all been waiting for: how did you get the nickname Cheno?

EG: It comes from my middle name Arsenio and is a nickname I share with my dad. Everybody called my dad that so everyone started calling me Chenito when I was little and now Cheno.

8. This quarantine has been tough for everyone. What have you been up to?

EG: I’m working out as much as I can. Reading a few books, watching tv, and calling my family and friends to make sure everyone is doing ok.

9. What TV shows are you watching?

EG: I just watched Tiger King -- it's crazy and also really sad. I think everyone is watching this show right now.

EG: That's a tough one. I miss everything from home in Mexico, but since I've been in the U.S. the past couple seasons I've made an effort to try as much new food as possible. I love a really good steak. I’ve also been cooking a lot and trying to make new things to keep busy – pasta, steak etc. I also really like seafood and sushi. If it were my last meal, I couldn't choose so I would just have a little bit of everything.

11. Who's your favorite footballer of all-time?

EG: The original Ronaldo – the good one (just kidding). His skills, his goals, he was so talented and looked like he was a man playing among kids. I cried when his Brazil team lost to France in the 1998 World Cup Final.

EG: Matthew McConaughey – he's a great actor, funny, and is in great movies. Also the guy in Batman -- Christian Bale.

14. Who's the most interesting person in your phone contacts?

EG: That one is tough but would have to say my mom. She's very interesting and keeps you on your toes.

15. What are some of your favorite moments as a player?

EG: I am lucky to have a few favorites, but the top is probably when I played in the U-17 World Cup for Mexico -- I scored a goal in the final and we won the tournament.

16. That's really cool. For the fans that don't know, that was a tournament in which you helped lead the U-17 Mexican National Team to a World Cup title, finished with the second-most goals in the tournament, and teamed up with the likes of Carlos Vela and Giovanni Dos Santos. Any other moments come to mind?

Another moment would be when I scored my first goal in Liga MX first division -- I was playing for Monarcas vs. Club Atlas. I also remember there was a match where I came off the bench for Monarcas, and I scored two goals to tie the game. The whole stadium filled with thousands of people was chanting my name "Ever, Ever, Ever". That was really cool. I would say finally, my daughter came and visited me last year in San Antonio to see a match. I scored a goal and I got to celebrate with her. To your question before, that's my favorite goal celebration.

17. Who's your favorite soccer team?

EG: Real Madrid. I’ve been a Real Madrid fan since I was little -- it started with Hugo Sanchez who was a Mexican striker playing for Real Madrid. He was just so good and scored so many goals.

18. What's your objective this season on the pitch?

EG: I came here to help my teammates to be better and to do what our coaches need me to do to help us win. If the goals come then that’s everything you could ask for.

19. What are you most excited for this season?

EG: I need to be on the field right now with my teammates. I just miss everything right now. Sharing stories and playing matches together. We want to win everything but we need to first be on the pitch to do that.

20. What's one message you have for the fans?

EG: I'm very impressed with the fans here in Hartford and can’t wait to play in front of them and hear their chants (I heard a preview at one of our preseason matches). They are a big motivation for us because they are coming to support us, and we need to give them a reason to cheer and keep coming back. I want to say thank you to the fans for bringing so much love and passion to this team. And make sure to wash your hands!