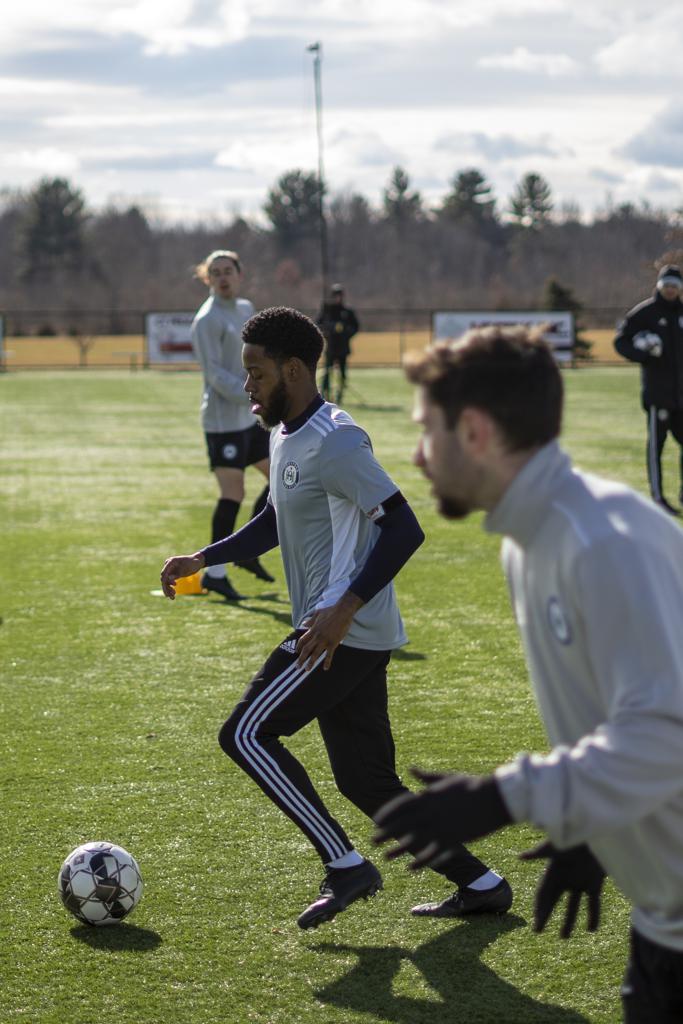 Welcome back to our 20 Questions series! Our goal is to help you better get to know the players you see on the pitch week in and week out. For anyone who missed the first edition with Harry Swartz, click here to read it. We spoke with Alex Dixon who returns for his second season in Hartford to talk about the upcoming season, quarantine, and whatever else popped into our heads. Enjoy!

1. What are you doing in the middle of the quarantine?

AD: I'm trying out a bunch of different recipes. I'm going on a lot of walks, just trying to get out of the house as much as possible. I've been watching some shows, reading some books. I'm just trying to do anything without going crazy considering we're locked up pretty much 24/7 right now.

2. What recipes are you cooking?

AD: Last night I made a crock pot Carne Asada for a little Taco Tuesday. That's the first time I've made it. It came out pretty good so it's gonna be a staple in the household from now on.

3. Do you have a favorite thing to cook?

AD: No, not anything in particular I just like trying out new things. I'll search around the internet to find recipes. Whatever I'm feeling that day, I'll just try something out, but I'm pretty open to almost anything.

4. What's on the plate for Alex Dixon's last meal?

AD: If I have to have one final meal of all time I'm getting jerk chicken, rice and peas, couple of beef patties, cola champagne. That would be it. That goes straight back to the Jamaican side and I would go all out with that.

AD: It's been great. He's very detail oriented, so you have to be switched on all the time. I'm learning some new concepts. It's my 10th year, and you don't really think that you'd be learning so many new things at this point in time but he's brought in a lot of new ideas, different ways to look at the game, so it's been good, it's been exciting and it makes me want to play that much more.

6. How has he helped you see the game differently?

AD: I'm kind of in a different role as far as where I'm playing this year, so I'm trying to learn those new movements up top and playing with a second striker. I'm not only learning where I'm at, but trying to be switched on and know where everybody else is on the field as well. That's one of the big things, just knowing whenever one guy starts drifting wide, what hole you need to fill into, or if somebody is making that run ahead of you, what you need to do, and know certain types of situations. It's been a lot of information but it's been a lot of good information and it's been fun.

7. How do you like this system compared to other systems you've played before?

AD: It's a little different. It's very intense, you know we're going to be pressing a lot which I like. I think we're gonna get a bunch of chances, we're not going to give up too many goals, it's just going to be a solid all around system. It's the first time I've played this style, but I'm enjoying it so far. It's learning, which, you know, every player wants to keep learning and just having to stay engaged. There's no days off.

8. What is a fun fact about you that most fans don't know?

AD: I love to read. I'm constantly reading something from the moment I wake up to when I go to bed, even if its Twitter or whatever else. I'm reading 24-7.

9. Do you have a favorite book?

AD: Growing up, obviously the Harry Potter series. Those are the books that got me into reading. Right now I am reading Pep Guardiola's book. It goes into the insights of how he got Barcelona from where they were to becoming the best club team on earth, so that's an interesting read that I'm going through right now. It's an interesting read of the tactical approach, how he worked with Messi, how he got those guys to go from the style of play that they were playing into what he wanted. I haven't reached the back end of it yet, but I think it's supposed to touch on Manchester City as well.

10. If Alex Dixon wasn't a pro soccer player he would be what?

AD: That's a tough one. I don't know, maybe like a backup dancer or something? I've got some decent dancing skills but nothing crazy. Maybe if I put all my energy into that I'd be a better dancer. That's all I can really think of right now. Or maybe I'd be a writer or something.

11. Have you given any thought to trying to write something?

AD: No, the idea of putting my thoughts down on paper - I've gotten into journaling, a lot more recently, but I'm not the kind of person who likes being the center of attention or having my stuff out there. I realize that is kind of weird because being a professional soccer player, you're always out there in front of crowds and everything but I'm just not the attention seeking kind of person.

12. Journaling, as I understand, is therapeutic for some people. Is there a particular reason that you've started journaling?

AD: For that reason, right there. There's a lot of stuff going on right now and throughout life and I try to get my thoughts down on paper and try to analyze and cope with everything. But that's been the main reason, it's like a little form of meditation in a way and I'm trying to become more calm and well rounded.

AD: Try to stay healthy, that's the main thing. My main goal is to not miss any games this year and I think everything else will fall into place if that happens. Consistency makes a big difference and if I'm playing game in and game out, I know the chances will come and I'll have chances to set other guys up on the team and contribute in any way I can. I think it'll be great for us and we'll make a great little run and get into the playoffs.

14. What is the best game you've ever attended as a fan?

AD: I got to see Napoli and Inter play each other in Italy. That atmosphere was just crazy in Naples. And just seeing how those people eat, sleep, and breathe soccer was amazing to see.

15. Have you have you experienced anything like that anywhere else?

AD: No, I think the thing that came closest was my rookie year when we traveled to Seattle. I want to say there were 30 or 40 thousand people there. That was the loudest place I've ever been in my life. Just sitting side by side next to a teammate you couldn't hear them talk, you had to scream, literally sitting a foot away from somebody. And that was coming in, my first year, I think the the second game of the season. And it's just like oh wow, this is insane. It's probably been the loudest and coolest place I've experienced in America.

16. What, what does an off day look like for Alex Dixon?

AD: Probably sleeping a little bit later than normal. Get up, make some breakfast, feed my dog, take him out for a long walk. As the day goes on I'll read something or, you know, now I've hopped on a little bit more PlayStation, catch up with friends, talk to family, and maybe get a little jog in there throughout the day depending on how the body's feeling. Or go to the gym and get a little sauna session. It all kind of varies on how my body's feeling and how tough training has been, but I can guarantee there'll be a dog walk in there for a long period of time.

17. What's the biggest obstacle you faced in your career?

AD: The biggest obstacle I faced in my career would be going through crises of confidence, especially when I was back in Houston. Not playing every game is kind of difficult to deal with when you're used to playing every game in college and club soccer. You have to learn how to keep that balance and not let yourself get too low. I think figuring that part of my career out was definitely the biggest obstacle because it was hard not being involved every game. You have to handle yourself a different kind of way and do the extra work, and that takes some understanding and getting used to, which I think I'm good at now. But it definitely was a long road to get to the mindset that I'm at now.

18. What was that moment that helped you change your attitude?

AD: Leaving Houston. You go there, you think that you're working hard enough every day to be playing and then you end up getting let go, and it's kind of like a shell shock like 'Wow, maybe I wasn't doing enough or doing the things that I thought I should have been doing'. So I think that that was the wake up call for me. It's not just, you go to training and you're doing enough, you have to go to training and you have to make sure you're doing the right stuff off the field and doing the extra work before and after training so that was definitely the big, big eye opener, not only for soccer but for life in general.

AD: Do more. If you think you're doing enough, you're not doing enough, so just always do a little bit of extra. You can think that you're at the top of your game, you're playing well, you're fit and whatever else but there's always something else that you can be doing and working on.

20. When you look back on your career, how do you want to be remembered?