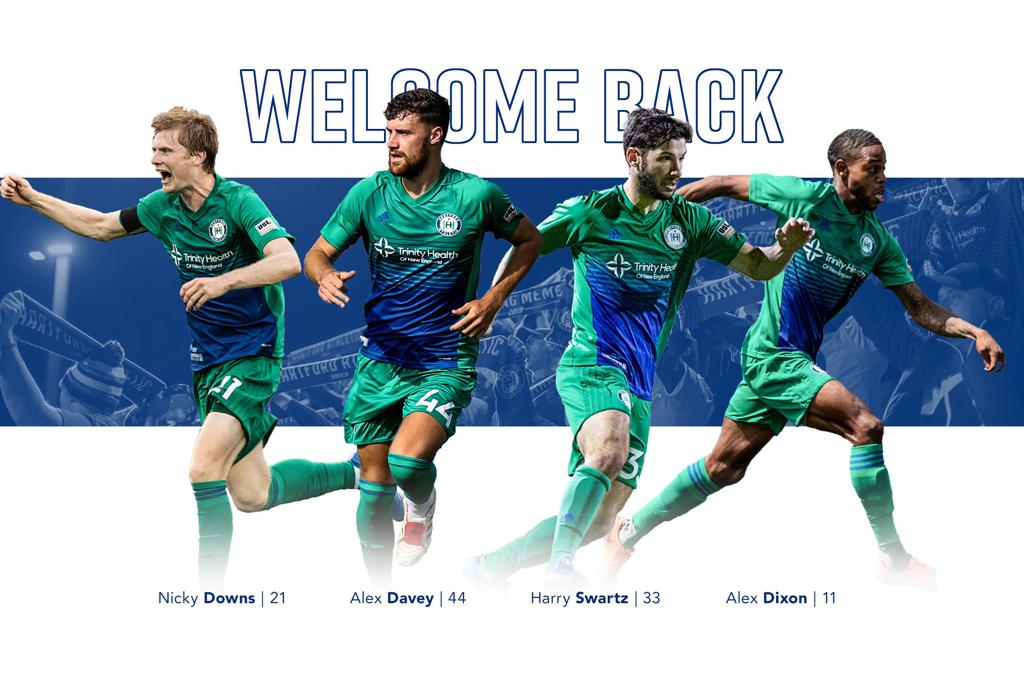 HARTFORD, Conn. (October 30, 2019) – Hartford Athletic announced today that Harry Swartz, Alex Dixon, Alex Davey, and Nicky Downs will return to Hartford as the Club continues to fill out its roster for the 2020 season.

“We are very excited to have a strong core of returning players as we enter our second season,” said Hartford Athletic Chairman and CEO Bruce Mandell. “Each member of this group played an important role for us in 2019 and provide a great foundation to build on as we continue adding quality players for the 2020 campaign.”

“I know our season just ended, but I’m ready to get the 2020 season started,” said midfielder and 2019 Team MVP Harry Swartz. “I love being here in Hartford. We have the best fans in the world who support us every single week. This has been a great place to start my career, and I’m really excited for what’s ahead in 2020.”

Further announcements regarding additional returning players for 2019, along with new signings, will be announced over the coming weeks.

Midfielder Harry Swartz returns for his second season in Hartford after earning the Club’s Team MVP award as voted on by the team. Swartz, who suffered an injury at the MLS Combine in February, didn’t appear in a match for Athletic until the home opener on May 4th. However, he made his presence felt as soon as he stepped on the pitch, starting at right back and recording five tackles and four interceptions in his first match. Swartz’s versatility was on full display this season, starting multiple matches at Right Back, Right Wing, and Forward – the only player on the team to start multiple matches at three different positions. He finished the 2019 season with four goals (T-5th on the team), three assists (T-5th), and twenty-three chances created (4th) in just 20 matches.

It was a slow start to the season for Forward Alex Dixon who suffered a concussion in the Club’s first match. Once healthy, Dixon paced the offense through much of the season’s final stretch starting thirteen consecutive matches from June 28th until September 22nd. He finished the season with five goals (T-3rd) and four assists (T-1st) and earned USL Championship Team of the Week Honors for his performance in a 5-1 win over Loudoun United FC. Dixon scored twice in the match and hit the woodwork twice.

Center-back Alex Davey joined Hartford after the international transfer window reopened on July 12th. The Chelsea academy product appeared in thirteen matches for the Boys in Green and brought stability to the left center-back position – four other Hartford Athletic players started a match there prior to Davey’s arrival. Despite getting a late start to his season, Davey finished second on the team in Clearances (56) and Blocks (11).

2019 was a big year for Nicky Downs who earned his first professional contract and graduated from Yale in a matter of months. The first Connecticut product on the 2019 roster, Downs appeared in 23 matches for Hartford, starting 11. His first start came in late April in the last of the eight-match road trip for Athletic and earned high praise for it. The coaching staff called him the most dominant player on the field. His performance did enough to earn him another start in the first-ever home match in Hartford Athletic history. Downs finished the season as the Club’s most accurate passer (87.2%).