The 18 – United Under One Banner

Displays by Red Fury, Bandidos in tribute to El Paso brought friendship through fandom to the fore 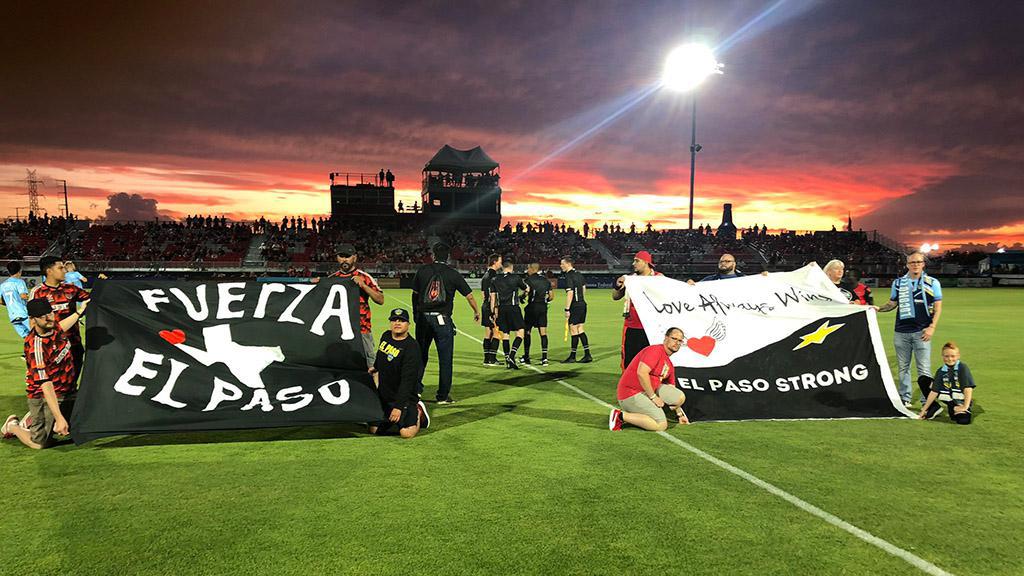 It may have been a key game between two playoff contenders in the Western Conference, but Saturday’s game between Phoenix Rising FC and El Paso Locomotive FC had a far greater significance emotionally as Locomotive FC returned to the field for the first time since the tragedy that befell its community a week earlier when it visited Casino Arizona Field.

And given the relationship that has quickly struck up between the supporters from both clubs, the tribute paid to their visitors by Rising FC supporters’ groups the Red Fury and Los Bandidos struck a perfect tone for the night.

Raising tifos with the messages “Love Always Wins / El Paso Strong” (Red Fury) and “Fuerza El Paso” (Bandidos), the club welcomed the visiting fans from Locomotive supporters’ group the 8th Notch in their first visit to Phoenix with open arms, a sign of the camaraderie that can be found off the field around the Championship.

“I remembered [last Saturday] that El Paso was the next game on the schedule and I went right to our leadership group and said we have to do something for this game,” Michael Vanderplas, an organizer for the Red Fury told the Arizona Republic’s Richard Morin. “We came up with some designs and got it painted up.”

After the efforts of Locomotive FC’s players in the prior week – both in donating blood and helping raise funds for EP Fusion FC, which was directly affected by the tragedy – and the major donation of $150,000 by MountainStar Sports Group to two victims’ support funds, Locomotive FC has already made a tremendous impact in helping its city recover.

But Phoenix’s fans made an important impact of their own in the outstanding way they welcomed their visitors this Saturday.

“One of the reasons why I love soccer is that it gives fans a voice they don't really have in other sports,” Vanderplas told Morin. “I think that soccer is a little bit different and creates a voice for the fans.

“I think this is an important time to use that voice.”

1. On the field, Phoenix Rising FC had to fight to extend its league-record winning streak to 13 games, but thanks to Solomon Asante’s 16th goal of the season from the penalty spot with 17 minutes to go the side became the first to reach 50 points this season.

2. With Locomotive FC reduced to 10 men after James Kiffe was sent off just before halftime, Phoenix Head Coach Rick Shantz used the halftime break to try and make sure his side came out with the necessary energy to break down its short-handed opponent. With the game level 1-1 at the break after the teams had exchanged goals five minutes apart midway through the first half, avoiding a similar slack performance that had led to a 0-0 draw against a 10-man Fresno FC earlier this season was at the front of Schantz’s mind.

3. “At halftime I told them, remember Fresno, when the other team had 10 and we just weren’t urgent,” said Schantz. “I could see it coming, so I told the coaches we have to make some changes, we have to play more direct, we have to throw the ball in the box because nothing is going to happen. The guys are just passing it around doing nothing. I thought [second-half substitute Joey] Calistri brought a lot of life, happy for him. They’re a really good team. I expect we’ll see them again in the playoffs.”

4. With a record of 15-2-5 through its first 22 games, Phoenix is close to the best mark in the league at this point of the season in its history.

5. The other team on this list from more recent seasons, Real Monarchs SLC, right now would be poised to be Rising FC’s opponent in a projected Western Conference Semifinal matchup after a 4-1 win against Tulsa Roughnecks FC on Saturday night continued the club’s dominant home form at Zions Bank Stadium since it was opened.

6. The Monarchs are now 21-3-3 on their home turf with a +34 goal differential, including an 8-2-1 record this season which puts the side tied for second in the league in home victories alongside Rising FC (8-0-3) and trailing only the New York Red Bulls II (10-2-2). With the potential they could visit Phoenix in that prospective postseason matchup, the Monarchs will need an uptick in road form as and when that game materializes, but with Douglas Martinez heading back after helping Honduras win a silver medal at the Pan American Games this weekend, Real is looking in very good shape right now.

7. The Monarchs get to test their road form in one of next weekend’s marquee matchups as they visit third-place Fresno FC on Friday night at Chukchansi Park, where the two teams have combined for seven wins in their last 10 outings. “We know it's going to be a tough game,” said Monarchs defender Kalen Ryden. “They're a good team. They're in good form, so should be a good test for us.Normal”

8. The form team in the Eastern Conference after this weekend? There are a few good options right now, including Birmingham Legion FC, which we look at right here. But with Nashville SC being held to a 0-0 draw by Bethlehem Steel FC on Saturday night, the only team with a four-game winning streak currently in the East is Pittsburgh Riverhounds SC after it took a 3-2 victory against the Swope Park Rangers at Highmark Stadium on Saturday night.

9. After coming close to as perfect a 90-minutes as the side has put together in its win the prior Saturday against Memphis 901 FC, though, the nature of the performance against the Rangers was one that the players felt left plenty of room for improvement. “We didn't do a good job of dictating the game,” said Hounds forward Christian Volesky. “They're a younger group, but they like to possess the ball and we kind of sat back and didn't dictate the game like we normally do. It was tough and we made the game more difficult than it needed to be.”

10. The Hounds’ difficulty in dictating the flow of the game could have come from the lineup Head Coach Bob Lilley elected to send out, with the experienced midfield duo of Kevin Kerr and Kenardo Forbes both taking a game off before two major road tests against the New York Red Bulls II (Wednesday night) and North Carolina FC (Saturday night) this week. With the Hounds currently in a position where a top-four finish is in reach – with 13 games left the Hounds’ maximum total of 77 points is the fourth-highest in the Eastern Conference – we could find out plenty about Pittsburgh’s title pedigree by this time next week.

11. “Those are two good teams and we're away from home,” said Volesky. “It's going to be a great test. At this point in the season it's crucial. We're going to see where we're at, what we're made of, and like I said, we had some key players resting tonight. We have a lot of firepower ready for the Red Bulls and North Carolina.”

12. As for firepower, well, the New York Red Bulls II showed off their capabilities against Hartford Athletic on Saturday afternoon in a 5-1 win that moved them ahead of the Tampa Bay Rowdies and to the top of the Eastern Conference. There was certainly something to the two-man advantage the visitors gained early in the second half, but you could make a good argument the Red Bulls II’s pressure was going to eventually tell even if the sides had remained even in manpower.

13. New York registered 11 key passes to Hartford’s two over the first 55 minutes of the games, while also outshooting them 13-4 over the same span. As soon as Sebastian Elney’s goal arrived in the 64th minute, though, the floodgates opened as five different Red Bulls II players found the back of the net, including a first professional goal for Janos Loebe with an arrow to the top-right corner from a free kick to provide the exclamation point.

14. The five-goal display shouldn’t come as any surprise to anyone who has watched the Red Bulls II in the past. Constantly among the league-leaders in second-half goals since joining the league, New York rarely relents even when a game appears to be well in hand. Since joining the league in 2015, it has scored more goals in the regular season than any other, with only fellow 2015 arrival Louisville City FC really coming close.

15. Louisville City FC put up its own five-goal performance on Sunday afternoon, but not before getting a minor scare from ATL UTD 2 at Slugger Field before pulling away for victory late on. It might be interesting to think how things might have gone if Jackson Conway’s shot that rebounded off the crossbar had gone in a minute after he’d pulled Atlanta within a goal, which would have leveled the game with 17 minutes to go, but the moment that Niall McCabe’s outstanding free kick from 30 yards found the net, momentum clearly swung back the way of the hosts.

16. Before the flurry of action in the final 20 minutes, the biggest talking point from the contest appeared set to be Brian Ownby finding the net for the first time this season, with the veteran winger’s goal having opened the scoring after a great move down the right side that saw Antoine Hoppenot provide the key pass for the finish. Instead, an injury to Ownby that saw him substituted off in the 52nd minute after a collision that saw Atlanta defender Wesly Decas earn a yellow card left some concern about when Ownby might be available to return.

17. “He’s a little shook up to be fair,” said LouCity Head Coach John Hackworth. “He took a pretty hard elbow to the jaw, so I’m hopeful that it’s not a concussion and I’m hopeful that it doesn’t put him out. He has a history of those and that’s the hardest thing with those kinds of injuries.”

18. It would certainly be very disappointing to see Ownby sidelined for long, especially given his attitude and ability after the injury problems he has faced over the past couple of years. From a personal perspective, it’s been a lot of fun watching his career since getting to first meet him at the 2012 MLS Combine when he was coming off a stellar career for the University of Virginia and representing Reading United AC in USL League Two, and I hope we see him back on the field again soon.