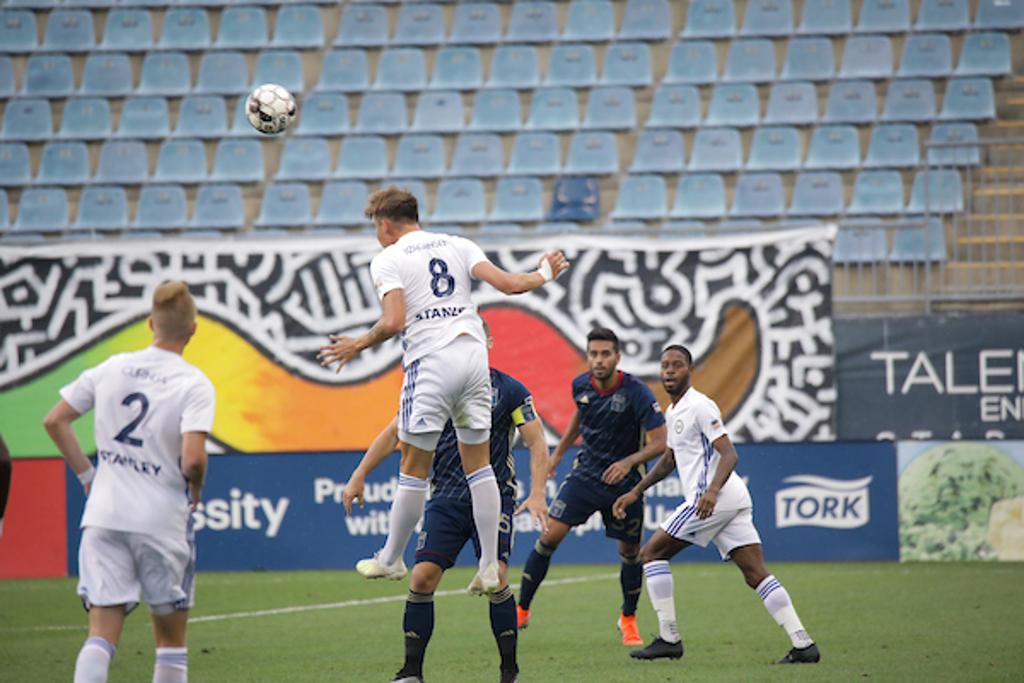 After earning a massive victory at Bethlehem Steel FC, Hartford Athletic will seek another road upset as it travels to Nashville SC. The boys in green are only 8 points off playoff pace, and they will hope to close that gap with another win on Wednesday night. Here’s what you need to know:

Hartford Athletic secured three massive points at Bethlehem Steel FC on Thursday night, winning 3-0 and keeping its first-ever clean sheet in the process. After goalkeeper Frederik Due made a crucial, 20th-minute penalty save, Hartford rode its momentum to the opening goal in the 28th. Alex Dixon’s low cross found Daniel Bedoya in the heart of the Bethlehem penalty area, and Athletic’s newest signing finished off the move to give his side a 1-0 lead. The boys in green would seize full control of the match on the 50-minute mark; Dixon fielded Lee’s forward ball and casually stroked his shot past Bethlehem goalkeeper Todd Morton. After Steel FC defender Benjamin Ofeimu picked up a second yellow card, Hartford substitute Wojciech Wojcik polished off proceedings in the 84th minute, dancing past Matt Real and slotting his shot into the bottom left corner. Hartford would preserve its clean sheet in the final minutes, cruising to a dominant, shutout victory.

Bedoya has made some serious noise since joining Hartford Athletic on loan last month. The 25-year old has flashed his versatility in just three appearances and two starts for the club, logging time at center midfielder and striker. Bedoya’s dual-threat ability has already been on full display; the Colombian has already hit the back once of the net and recorded 7 key passes, while also posting an 84.9% pass completion rate. Hartford must make Bedoya the focal point of its attack if it hopes to generate the lion’s share of chances on Wednesday night.

Ríos remains Nashville’s most dangerous attacking threat, seemingly hitting the back of the net at will this season. The 2018 All-USL Championship First Teamer leads the Eastern Conference (and is second in the league) in goals thus far, bagging 13 in just 20 appearances. The 24-year old also exerts immense pressure on opposing keepers, already attempting 49 shots and placing 22 on frame. Hartford has first-hand experience with Ríos’ lethal finishing ability; the Mexican forward grabbed the opening goal when the two sides met on June 16that Rentschler Field. The boys in green must stick a man on Ríos at all times to ensure that he cannot carve out any glaring chances on Wednesday night.

Nashville SC is one of the top teams in the Eastern Conference, sitting in 4th place with 35 points. Coach Gary Smith’s side have rebounded well from a recent three-match winless run, earning back-to-back 2-0 triumphs over Memphis 901 FC and Indy Eleven. The boys from the “Music City” are set to play their second of three matches this week, and they will hope to make up some ground on the likes of North Carolina FC and Indy Eleven with three points against Hartford. Nashville will likely enter Wednesday feeling confident about its victory prospects, having defeated Athletic in 3-2, come-from-behind fashion on June 16.

Updates on the match will be provided via Twitter @hfdathletic or by following #NSHvHFD.